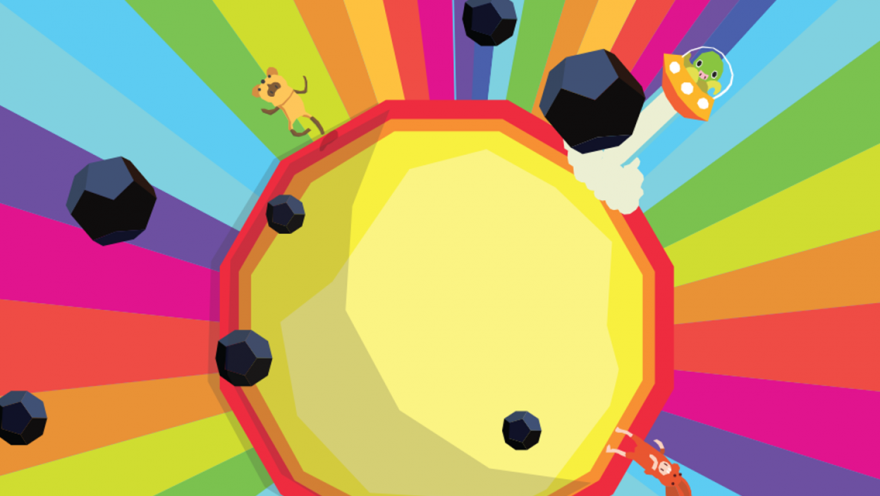 Planet Quest is gosh-darn fabulous. It’s a rhythm game played with your fingers that somehow creates movement in your hips. It does this by channeling the same goofy energy as a Keita Takahashi game (Noby Noby Boy, Katamari Damacy) while also borrowing the zany logic of Adventure Time, or a Chuck Jones cartoon.

There are planets and stars with stripes and smiles. Upon these, people in full-body animal outfits—onesies, I guess—dance to whatever beat is thrown at them. There are lions next to giraffes, a series of mice, and a lonesome raving brown bear. And trust me, these people are really rockin’; they’re not holding anything back in their animated jiving. The music is in them.

even the camera can’t keep its butt from wiggling

You enter this scene as a single alien, your green tentacles and pink snout squashed into a 1950s-style flying saucer. What you do is tap the screen on the beat to zap a beam to either abduct or destroy the dancers. It’s not made clear which of these you do exactly. And the game starts so quickly that you don’t have time to question it, nor would you want to after you’ve been swooped up by Planet Quest’s catchy tunes. The only thing that is explained is that zapping flowers is bad. Of course, you don’t know why that is either.

The studio behind Planet Quest, the London-based Out of the Bit, has given snippets of insight regarding the complexity of all the back-end work that has gone into it. The studio created its own in-house engine called Stork Vector that shapes the game’s look and allows it the flexibility to be played on any screen size. In fact, this adaptability is used creatively as well as prosaically: each song is given further dynamism by having the camera zoom in for really intense beats, while big build-ups have it incrementally snap out from the planet. You’re given the impression that even the camera can’t keep its butt from wiggling, and that adds to the game’s high energy.

The other nifty bit of tech is Planet Quest‘s music tracker system, “SongBird.” Each planet and star you tap along to has its own musical theme. This ranges from reggae to drum ‘n’ bass, and even a bit of boogie. As SongBird plays each genre sample-by-sample it can remix its own tunes while also seamlessly blasting out its rainbow-garnished visuals for you to tap along to. Plus, this system is apparently able to create an unlimited amount of music from whatever it is fed, giving Planet Quest plenty of room for expansion.

But you don’t need to understand the back-end logistics of Planet Quest to know that it’s a bloody good time. Its music is a wonderful blend of feel-good enthusiasm, its wit makes it feel really alive in your hands, and such a confident merging of interaction, catchy tunes, and cheerful animation is rare. It makes for an immediately enjoyable challenge that any one of any age can immediately grok. If Planet Quest were a person you’d want it hosting and DJing every party you attended.

You can download Planet Quest for free on the iOS App Store.