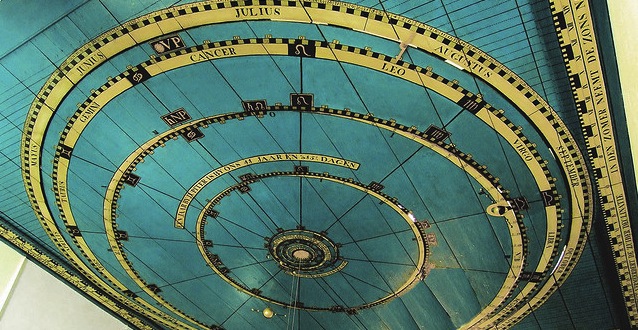 The Enlightenment was probably a topic covered in your European history class, too. If it was anything like mine, there were long talks about Voltaire and Locke and yeah, democracy and liberalism and modern reason. The short of it was that individualism and rational thought reigned supreme in the 18th and 19th centuries, while the grumpy and controlling old man that was The Church took backseat for a change. But as with all survey courses, the little and most symbolic stories go overlooked. Let us consider the oldest existing planetarium built in the late 1700s, and the amateur astronomer who constructed it all himself, Eise Eisinga.

Eisinga started with very little. Born in 1774 as the son of a Dutch tradesman, he wasn’t expected to go to the regional Latin school—rather, he was to conform and predictably follow his father. Instead of submitting to apprenticeship, the young self-taught Eise produced complex mathematical works that more than demonstrated his gift. By 17, Eisinga had published a whole tome on astronomy. (Personal note: All I had accomplished by age 17 was a series of whiny LiveJournal posts.) His very upbringing serves as a metaphor for the Enlightenment: a departure from the restrictive norm into uncharted territory. And what territory is more exciting than the last great human frontier?

Maybe the only thing that resonates more than the old-school simulator is the DIY spirit of human exploration through which it was created.

When the budding thinker turned 30, fellow Dutchman Eelco Alta made the god-fearing claim that the planets would all align in such a way that they would shoot Earth right into the sun, ushering in the Apocalypse. Not only did Eisinga fervently argue these claims, he constructed a planetarium in his family’s living room to prove it. Although technically an orrery, the seven-year endeavor remains astronomically accurate via a system of wooden rings and 10,000 hand-forged teeth driven by a pendulum clock and nine weights. Uranus was discovered during construction, but Eisinga’s ceiling was not wide enough to accommodate it.

To this day, you can visit the small Dutch town of Franeker to marvel at the Do-It-Yourself planetarium that has been a rough model for every other ever since. Its sky-blue hue is striking, and the edifice still accurately conveys the rotation and revolutions of Mercury, Venus, Mars, Jupiter, and Saturn. Maybe the only thing that resonates more than the old-school simulator is the DIY spirit of human exploration through which it was created.

Outer Borough-based gaming group Babycastles (whose events Kill Screen has reported on and been involved with) is a real DIY rough-and-tumble shop. They too started with very little. I had heard about Babycastles events in South Williamsburg through more meticulous and in-the-know friends and quickly reached the point last year where I wanted to partake. That the indie game scene would flourish in Brooklyn made total sense: think of your favorite indie buzz bands and artists and I’m willing to bet that a good chunk of them call Brooklyn home. A Los Angeles Times article by veteran game writer and Babycastles curator Leigh Alexander includes frontman Syed Salahuddin explaining how one bore the other in a Queens venue called Silent Barn.

“The purpose of Silent Barn is to cultivate different subcultures, and, like, even though it’s primarily a music venue, it’s been open to other organizations which support community building, whether it’s in the video game or music space, or anywhere else,” Salahuddin says. “This is why it was the perfect spot to have an arcade here—it’s because we would get such exposure.”

Here, the haphazard marriage of indie music and game had succeeded.

The first of the Babycastles events I attended, which tend to be like a sloppy party thrown in your sketchiest friend’s converted warehouse apartment, featured plenty of booze and a genuine “anything is possible” attitude. In most cases, the play at hand takes on entirely fresh forms: an admirably boundless reimagining of the arcade. Except, instead of gamers huddling around stationary booths playing Space Invaders and Ms Pac-Man, the 20-something pioneers engage in games that can’t be inserted into your console or downloaded from the App Store. These works, resembling art in a gallery more than a quarter-gobbling arcade hall, range from the graphic-less, motion-based game found in Johann Sebastian Joust to celebrated cult indie programmer Cactus’ fare, whose games might be broadly described as David Lynch short films with an 8-bit nightmare aesthetic (but of course in the best way possible).

Since its inception, however, Babycastles has occasionally turned its sights toward the more polished venues of Manhattan. In 2010, it set up shop in the 42nd St. Gallery for an exhibition via Kickstarter. But the most notable occurred a little over a month ago when the collective took over the Natural History Museum’s Hayden Planetarium.

Tickets went on sale for the bash far in advance, at a price most underground gamers found hard to afford, but the chance to see the main event was too fascinating for most to pass up. I caved knowing the price was immaterial for two main reasons. One, I so wished to see the unveiling of the scrappy Babycastles group on a stage that could garner real attention. It isn’t every day that a little indie group, broadly cast of course as wretched hipsters according to the average person, would get a pass at something bigger than unmarked warehouses. The Natural History Museum’s stale 1970s dioramas and towering dinosaur bones and planetarium comprise one of New York City’s foremost destinations, right up there with the Empire State Building and the Statue of Liberty. Simply put, this is a real institution, one dedicated to advancing new ideas since its establishment in 1869.

And secondly, I just really wanted to see what playing a game in a planetarium would be like.

For a brief two-hour stint on January 26, Babycastles hosted a space-themed event in the museum not unlike its Williamsburg throwdowns in essence: it was plenty boozy, and showcased several indie games (many produced by students of the Museum of Modern Art’s teen program, which has a close relationship with Babycastles). A personal favorite included one by Matt Parker called Recurse, an interactive piece described as “a manic game of twisting bodies, quick reactions, and iteration,” encouraging uninhibited bodily movement and distortion. It was essentially a way to get imbibing friends to “dance” in front of a screen.

It’s a stressful process when a stranger, as drunk and disoriented as yourself, keeps making hard lefts when you only need to go up.

There was live music, as well as access to Beyond Planet Earth, an exhibit at least partially touched by living astro-legend and Hayden Planetarium director Neil Degrasse Tyson. But the main attraction? The first game in known history designed solely for the six-projector system of modern planetariums. The Natural History Museum’s website boasts that its customized Zeiss Star Projector is “the largest and most powerful virtual reality simulator in the world.” The operating system hosts 28 central processor units (yes, CPUs), while the graphics achieve a 4000 x 4000 resolution.

Space Cruiser, by programmer and designer Ivan Safrin, requires six players to work cooperatively to steer a spacecraft among a cloud of towering asteroids. The goal is to maneuver the vessel as a team toward a white blur in the middle of the rocky mess, which then becomes a wormhole to the next level. A HAL 9000-like character, voiced by the Magnetic Fields’ Stephin Merritt, provides snide commentary. It’s a stressful process when a stranger, as drunk and disoriented as yourself, keeps making hard lefts when you only need to go up. Merritt’s robot voice never hesitated to tell us that the team sucked.

Before entering the actual planetarium in my wine-induced haze, I was warned by a friend that I wouldn’t be seeing any action until the program was restarted. I sat back in one of the chairs and observed that cheap plastic steering-wheel controllers were propped up on cinder blocks and that the game would often freeze or glitch, leaving us gaping drunkingly at massive boulders tumbling around in digital space. A member of my party remarked that his controller was broken. Even I felt a little bored after five minutes of gameplay, as much as I resisted the feeling.

Remember when you saw your first Van Gogh, or went to the beach for the first time? I was supposed to be a rogue space captain blowing shit up on a whim, on a screen that was truly larger than life. I had wanted to live the part since I first started visiting planetariums in the second grade. Instead I played sixth wheel to an episode where my services weren’t really needed. Here was a monumental installation, a space fanatic’s wet dream, interrupted by the little details that make great games only good. I came out with a sore neck and the desire to find the plastic cup of red wine I had been nursing earlier. Yes, there were technical letdowns and other ones. I just wanted to go home and play half of Star Fox before falling asleep on the couch. While the DIY spirit reassured those attending that “cool games” were still alive and kicking, Space Cruiser’s full potential was not quite realized.

It came to me on the subway ride home that the event had been much bigger than the mishaps of Space Cruiser. I thought, pretty unfairly, I had seen DIY already: the overpriced change purses on Etsy with birds quilted on them. This was not that. This was seeing a group of talented spirits from Brooklyn carrying out legitimate aspirations with big implications right  in front of me—if only in retrospect. You can’t blame me too much for focusing entirely on the game.

Maybe this was a modern-day Enlightenment moment, whereby old structures were repurposed into new ones, like a living room into an orrery.

Eisinga’s planetarium was and is not perfect, either. In fact, the astronomer handed off a list of items that caretakers should consider. For instance, the pendulum must be adjusted on leap years and for fluctuating temperature and humidity. Another item regards the astronomer’s miscalculation of Saturn’s orbit, a glitch that must be corrected every year. It simply lacks the precision our digital generation has come to expect from contemporary technologies.

In the late 1910s, the Carl Zeiss company in Jena, Germany—once a microscope manufacturer—modernized the planetarium experience. Walther Bauersfeld, a chief design engineer for the company, simplified a perplexing problem with a groundbreaking idea: rather than the dated mechanisms of old, he suggested that planetary and star movements could be emulated if the celestial objects were projected. It took five years to construct this framework that was able to project images of 4,500 stars. Imagine the wonder of those who, in 1923, first got to see the Wonder of Jena, or what we recognize today as the first modern projection planetarium.

Would the modern version have taken shape without Eisinga’s model? Most likely, as the human fascination with the universe continues to mount even now. The “If you build it, they will come” cliché bears a lot of truth. Babycastles had only three weeks to make the game a reality, and the museum had its doubts, according to Salahuddin. His response? “No, we can do it.”