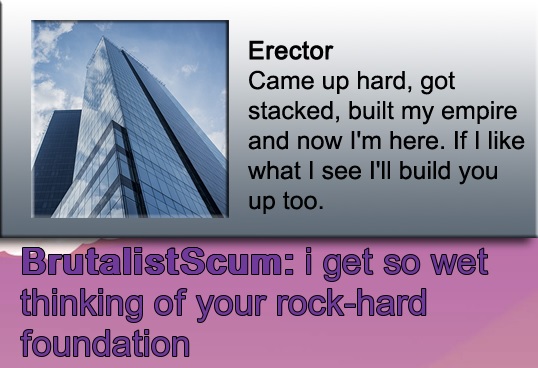 What this means is I told a horny panopticon that I would push my naked body against a dirty suburb window so it could watch, it then accepted, and I opened “Maps” to find the location at which this would go down. That’s where the game ends—signing off with the cheeky message “Have fun.” You’re not always this lucky. There are a range of potential suitors on Tectr, each with their own personality: one will send you unsolicited pictures of its grimy basement, another will tell you to touch yourself, and the skyscraper known as “Erector” won’t respond at all when you say its rock-hard foundation makes you wet. There is a lot of dating app humor to be found here.

All this might seem pretty wild, but as far as dating sims go, Tectr is actually one of the less shocking. There is a horse dating sim, a pigeon dating sim, a skeleton dating sim, and in each of these you play as a human. Yup. Japan is ruler of the dating sim, though, as proven by its many entries, which include an Egyptian god dating sim, one about dating buff grannies, and another that has you dating a Japanese zoo’s particularly beefy gorilla.

The other, and more common, type of architecture porn is a little more muted. It’s an activity that involves seeking out images of buildings and seeing which ones make you groan. There are subreddits and Tumblrs dedicated to this—the former of which identifies its purpose as sharing “the beautiful impossibilities that we want to live in.” There is desire here. There is want. The people who frequent these forums and seek out these images are out to find architectural orgasm. All Tectr does is return that lust, stating that its buildings “want you inside them.” So go ahead, slip cement into their crevices, varnish those angular forms, you dirty beast.