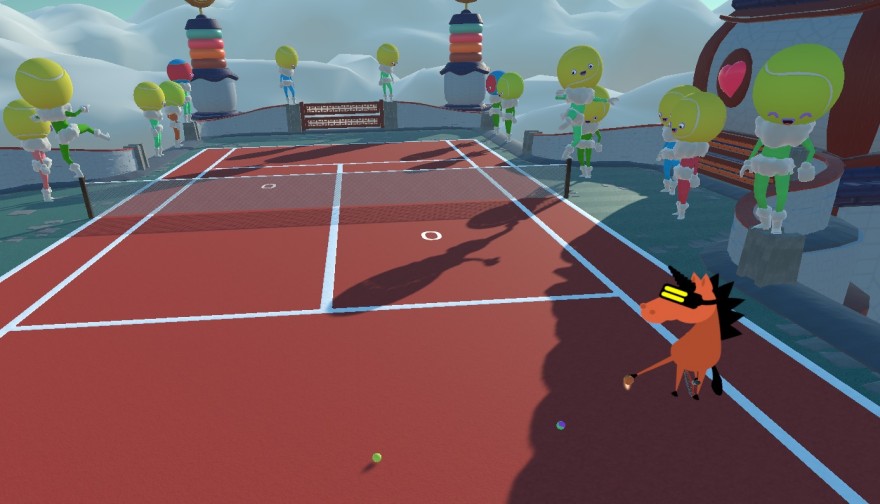 Playing tennis against yourself, running back-and-forth between either side of the court, is an almost impossible pursuit. Luckily, for any lonely soul out there that may try soloing the ball-and-racket sport, it’s now been made a whole lot easier thanks to virtual reality. #SelfieTennis, the social media-ready commercial debut from VRUnicorns has been released via Valve’s Steam VR platform as a launch title for the HTC Vive headset. It is a game, nay, a virtual experience that uses the magic of VR to let you participate on both sides of a singles tennis match.

Actually, “match” isn’t the right word for the average game of #SelfieTennis. This is not a game of forty-loves and deuces. Scoring is defined by total number of volleys, resulting in an arcade-style high-score mentality rather than the competition of traditional tennis. It also results in a visually bonkers circumstance where every time the ball passes over the net you are teleported to the opposite side.

a virtual court is defined by its freedom

Nintendo’s Wii Sports (2006) realized tennis with tactile-to-visual feedback that proved surprisingly compelling, despite a total lack of control over your avatar’s legs. In #SelfieTennis, however, your whole body is the avatar—including your legs—and thanks to the room-scanning functionality of the Vive, not only do you navigate virtual 3D space, you navigate physical 3D space too. And what a delicious virtual space it is. Everything looks like soft candy—creamy or chewy. In the same way that sugar appeals to our taste buds, the immediacy of feedback within a virtual space should lure in our eyes, ears, and hands.

“Now, wait a minute,” you might be thinking. “Hasn’t single player tennis already been solved through the invention of squash?” Well, sure. But there is a significant difference between a physical court and the virtual court of #SelfieTennis, and it’s one that’s more important than the fact that you are competing against yourself: where a physical court is defined by hard and fast rules, a virtual court is defined by its freedom. Without rules, a tennis court is just some grass (or, heaven forbid, clay) and two weirdos swinging clubs on either side of a large net. Sometimes they hit a ball back-and-forth. But without the regulations of the game, well, either you get bored or, if you’re more imaginative, the possibilities multiply.

#SelfieTennis takes the three basic elements of tennis—the ball, the racket, the people—and invites you to do whatever the heck you want with them. Without the rules of the physical court, that club in your hand becomes a far more versatile and potentially violent device. In one promotional video, creator VRUnicorns recommends “how to get your aggression out of your system when you suck,” and our unseen player begins mercilessly beating down the tennis-headed people who have been cheerily observing the one-on-none matches. There are other, less violent options available to you, but you’ll have to explore those for yourself.

#SelfieTennis is now available to purchase on Steam VR.