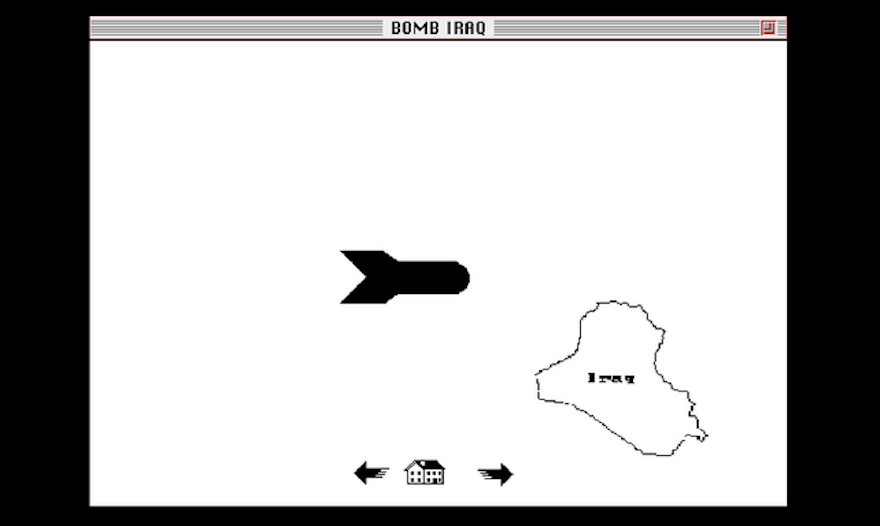 The digital art archivists at Rhizome have excavated and extracted files from the computer that contains Cory Arcangel’s 2005 Bomb Iraq, so now you can experience a piece of art from the creator of Super Mario Clouds in your browser.

A sort of modern-day Duchamp’s Fountain, Bomb Iraq is a post-conceptual found-object that begs the question: “What the fuck, art?” Originally, Bomb Iraq was a terrible homemade computer game with terrible clipart graphics programmed by a kid who remains anonymous. Obviously, it’s about bombing Iraq.

When Arcangel found the game on an old Macintosh TV, Apple’s flopped computer/television hybrid, he was smitten with it. He plunked it along with the strange computer and archaic operating system in a museum and posited as art.

Interestingly, all the original files of the previous computer owner are available for your perusal, the names and personal info redacted, together with the high scores from the game. Navigating the menus and vicariously experiencing this mysterious person’s life is all part of the art experience.

So be sure to head over to Rhizome and check it out. For convenience, there’s a handy tutorial on how to boot the game from the embedded emulator, which simulates an old Mac. iOS this isn’t.