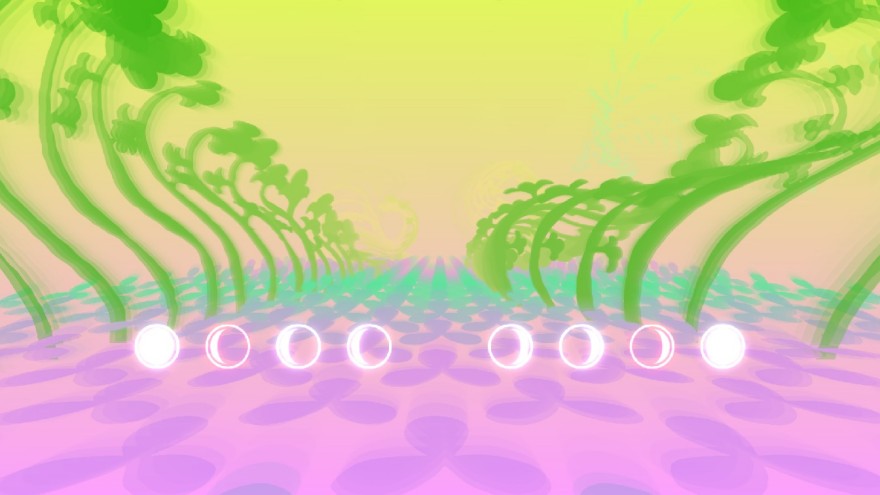 If nature was able to make a videogame I think it would be Alea. And it’s not just because it’s a twee, musical hike through a “psychedelic forest.” Nor is it due to its two graphics options: “Shrub” and “Tree.” I say that because you can play it with a moss controller. Like, actual moss, those green clumps of shrub that grow in the cracks of pavements or atop roofs. You’ve seen it. Yeah, that stuff.

This is really happening. Right now, at Fantastic Arcade, Alea is being played on an arcade cabinet. You have to poke all four fingers on each hand through two of the springy, soft lichens to get at the buttons underneath. You dip into nature first before connecting to the electronic media beneath. What a bizarre and delightful way to play a game. (I bet that moss will get warm, though.) The idea was net artist Cale Bradbury’s, who was inspired by the insectoid typewriters in David Cronenberg’s Naked Lunch.

The presence of this moss comes across to me as almost the videogame equivalent of arcology. It’s as if the creators want us to consider our relationship with nature when playing around with the game. And that makes sense, especially upon knowing that it’s the latest project by Paloma Dawkins, who has already shared with us her rambunctious view of nature in Gardenarium this year.

But specifically, in Alea the challenge is to press buttons to match the rhythm of the music, and it’s your success that causes the forest around you to spring up in dance. Light violet and green clovers do a Mexican Wave at your feet and giant curled stems shimmer above your head to your commands. You progress from green shoots to wizened trees as if you’re putting the energy into these plants through your performance. And so it playfully draws attention to your connection with nature inside the game as well as outside of it (if you’re playing with the moss controller) and the importance of being in tune with it.

“I’ve been thinking a lot about the moon”

But it’s also a little more than that. On its Fantastic Arcade page, Alea is described as an “experience of infinity, and a reminder of the endless light and dark currently occurring in all directions, at all times.” This idea of light and dark references the eight buttons that you press in the game as they correspond to moons on-screen. Important to note is that the controls are symmetrical so you only have to keep an eye on four moons at once, making sure to press two buttons at the same time. Each of the moons’ default lunar phase on-screen is a new moon; so it’s not visible, a blank circle. You know not to press the buttons when you see this. But the moons will regularly fill up in tandem with the music. When a full moon does arrive you have to press the button it represents to successfully match the beat. And your accuracy is shown in a percentage score once the song is over.

Dawkins explained where her mind is when coming up with this unusual control scheme: “I’ve been thinking a lot about the moon as being a reflection of the sun’s light, so the moon is kind of this thing that is reflecting light back on to us and it controls tides and it means so much to balance and nature,” she said. “You are kind of this entity controlling these symmetrical moons and therefore controlling the space, but something else is controlling the rhythm.”

The effect this has is to place us among nature’s cycle and its spaces. In part it reflects our power over it as we command the plants with our button presses—they seem to rely on us. But we, as players, are tied to the whim of the music, and so we don’t have full control. This seems to acknowledge that we can never truly escape from the wild no matter how we may try to tame it (we’re starting to see this with the world’s abandoned villages, such as the vine-covered Houtouwan on China’s Shengshan Island). And if that’s the case then, as with arcology, we should surely attempt to work with nature rather than against it for the best result.

You can purchase Alea as part of the Humble Bundle Weekly. It’s also looking for votes on Steam Greenlight.