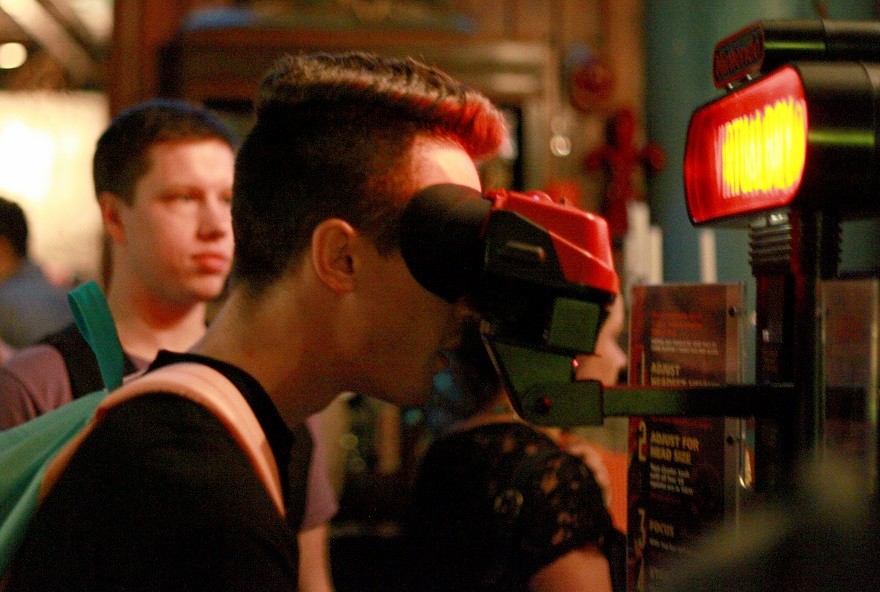 In case you haven’t heard, Kill Screen’s annual Two5six conference had expanded this year. In addition to a day of talks with designers, artists, and industry specialists at the intersection of games and culture, Two5six will be home to a film night and public arcade as well.

When Kill Screen curated its first arcade at the Museum of Modern Art in 2011, the idea was to select games that were easy to learn and immediately engaging. The choices were inspired by the Talk to Me exhibition, which focused on conversations between people and objects. As a result, the arcade was an opportunity for people to build a rapport with videogames through art, and vice versa.

The public arcade at Two5six will be showcasing an even wider selection of games, including Crossy Road, Ledoliel, and Lie to the Devil, among many others. While Crossy Road, a modern analogue to the arcade classic Frogger, shows how indebted to the quarter-munching game cabinets of the 70s and 80s many mobile games still are, Ledoliel and Lie to the Devil show how much they’ve changed.

In the former, as Kill Screen news editor Chris Priestman put it, “The goal is to travel diplomatically across the universe, that is, by safely tip-toeing through the peculiar lexicon and customs of multiple species of alien.” By letting people play with the confusion between disparate, fictional cultures, Ledoliel exposes how much our communication relies on common frames of reference and understanding.

In Lie to the Devil, designed by Jonathan Zungre, the stakes are more sinister. Contributing writer Jason Johnson described the setup from when the game was showcased at NYU last year: “You enter a dark room and sit at a desk before a laptop while a crowd watches you through a large windowpane.” The computer goes on to ask the player questions, trying at every turn to “con them into putting a bullet in their head.” And because of the game’s penchant for drawing in a crowd of onlookers, the computer-led interrogation takes on an even more surreal quality. It’s this communal dimension that makes the arcade, and the experience of playing games in that setting, so unique.

Check out these games and more, including the chance to play Tale of Tale’s Sunset before it’s released, by stopping in to the Two5Six public arcade on Sunday, May 17, located at the Villain in Brooklyn. The event is free and will feature music by Heathered Pearls and Michna. You can purchase tickets for the rest of the Two5six conference here.