This is a piece from Kill Screen #7. For more, check out the issue!

Put aside for a moment the historic highlight of Mae Jemison’s career—first black woman in space, aboard the Space Shuttle Endeavour in 1992—and you’re still left with all kinds of ridiculous awesomeness: Stanford at 16, then degrees in chemical engineering and Afro-American studies; dance classes at Alvin Ailey, plus a dance studio in her home; an MD, then a doctor in the Peace Corps, deployed to Liberia and Sierra Leone; a role in Star Trek: The Next Generation; she taught design at Dartmouth, built science curriculums for middle schoolers, and now is working to thoughtfully plan a human journey to another star, by 2112.

I called Jemison because I wanted to hear from astonauts about the games they play in zero gravity (which I wrote about in Kill Screen’s newest issue) but the conversation with Mae went all over the place in the most wonderful way. Kind of like her career. An edited and condensed version follows.

KILL SCREEN: Play. In space. Where do we start?

MAE JEMISON: Well, it’s difficult for me to think of this idea, about the area of play and games, without first getting kind of serious. It’s very serious, in terms of what it does for humans—all animals, really, mammals especially. You look at cats, which are my favorite creatures of the universe. Cats engage in an incredible amount of play. And look what it does for them, just in terms of reflexes, but also well-being. They also sleep very well. I know whenever I have a lot of play I sleep well. I don’t know what the connection is, but it’s a very serious subject even though it’s fun and games.

Was play considered serious business on the shuttle?

Well, you’re packed with so much work. I was on a spacelab mission, and had an incredibly busy schedule, but for me during that time, even just looking out the window was a joyful experiance.

What did a typical day consist of?

Experiments. I was working with frogs, taking care of them, and you really do want to get as much work done as possible. For researchers, they have put years of their professional lives into this, so whenever I had a moment of free time, I tried to make the experiments richer.

“It’s pure physicality. That’s when you start to kind of play.”

Was there a period of adjustment to space?

When people first get on orbit they don’t feel well. Being a doctor, looking at people, you’re like, you don’t look well. Your inner ear is not registering up and down, it’s not weighted, and your eyes are telling your body it’s moving, but it doesn’t really feel that way. It’s a really strange disconnection. Things that seem obvious and easy aren’t. You learn to moderate your movements and you start to take things really easy—slow and deliberate movements. If you put in too much inital momentum you’ll be banging around.

…It’s pure physicality. That’s when you start to kind of play. If I push off this wall, how long will it take me to reach the other wall, how hard will I bang into it? What footholds do I use to get around? It’s childlike, in a way, learning to move. But it’s also amazing how quickly you learn, how fast your body learns what to do.

There was a lot of dancing, for me. I’m a wannabe dancer, so I loved spinning in space. Not just a triple spin, you can keep going, and going.

Because there is no up and down, or up can be down, down can be up, does your concept of how objects and rooms work change?

All of a sudden you can use this entire volume of space! You can sit on the ceiling and hang down like Spider-Man. I used to do that: wedge myself up in that corner of the ceiling, and write notes and listen to music. I had incredible music onboard with me, lots of jazz and Stevie Wonder. You get used to using the whole of a room, and afterwards, after the mission, you see things a bit differently. People walk into rooms and they don’t look up, I look up!

“You can learn a lot about people and attitudes by games if they’re designed properly.”

Has anything else about how you view things back on Earth changed, since being in space?

This is going to sound funny, but it’s a big part of being in the space program: I really like looking at equipment. Now, when I take my car in to the shop, I want to know everything about it. How does this little bitty thing work? Or that? I want to know all about the inner workings of machines now.

I know you’ve been looking into ways to incorporate videogames into the space program. How did that come about?

Games are a great measure of reflexes, and how do you keep people’s reflexes tight in zero gravity? Remember, you’re moving slowly, without weight. Now we are in a weighted environment. And what if, on future missions, we suddenly need those old Earth-bound reflexes back. Games can even measure people in terms of mood. You can learn a lot about people and attitudes by games if they’re designed properly.

What happens after you return to Earth, physically? Is it really that shocking?

Yeah. Your cardio is totally deconditioned, your muscles are deconditioned. You’re on bedrest for a few days. Your heart is a muscle, so it’s tired, because you’re not using it as much. It’s a really big issue in the space program, how do you keep people in shape for when they return to a weighted environment? When you have to spend so much time on a bicycle, is that play? Could it be made more fun? More physical? I don’t know. But I want to find out.

The switching from zero-gravity to gravity, does that interest stem from the 100 Year Starship project? And can you explain that project a little bit?

The 100 Year Starship is both a way of considering interstellar flight and looking at our world, here and now, differently to come up with different solutions. We’re designing a ship for a 100 year mission, to a star, but thinking about what humans aboard a ship traveling through space for a century will go through, it forces you to think hard about society now, and what’s valuable, and worth preserving or designing into such a vessle.

One thing we’re interested in studying more is multiplayer games. It’s a way to apply some of our ideas right now, because some of the biggest stumbling blocks we have right now in terms of testing our design are people. Could we get some insight putting people on a starship and seeing what they do, what causes what kinds of behavior. Given certain scenarios, a certain set of circumstances, we learn about critical thinking and thought process. 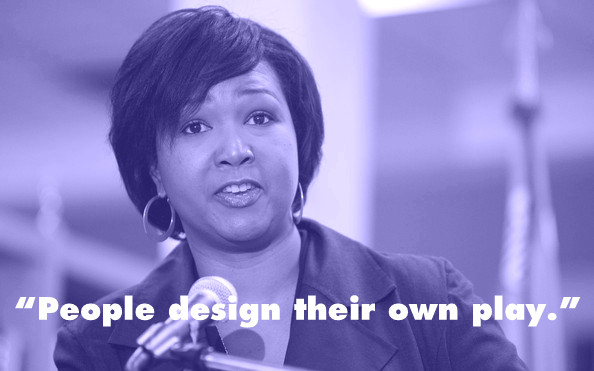 Are you also thinking about how people will play on this 100 Year Starship?

Yes, but people make their own play. Something I’ve been thinking about a lot lately is how we don’t have very good play here on Earth. That is, we try to push ourselves through our day without play, without humor. Even things like golfing with  business are often work masquerading as play. And we got rid of recess out of grade school, is that foolish or what?

Was there a time we did have good play? Or, rather, what is good play?

I go back to when I was growing up, how much we used to make up stuff, just go  out of the house, and all of a sudden you have this incredible fantasy world, this box can be a magical ship, a space you created, and you’re doing things in your imagination. We need to have more of that, that openness of space.

“No one shows the child the sky.”

On an interstellar mission, we have no idea how long it will last, but there needs to be space and allowances made for play, and it must be something that evolves with the crew and the folks that are up there. You aren’t waiting for instructions, for an upload from Earth.

It’s amazing to me that this far out, deep space project would end up turning back on Earth and force us to reconsider our society here.

That’s exactly it. When you think about how to design a society that’s going to exist on its own, you look at how we’ve designed things—or not. Space captures people’s imaginations, and you can use it as a means of teaching lots of behavior. Kids are willing to sit their and pay attention to it, because it’s space, it’s awesome.

It’s one of our first sciences. There’s an African proverb that says: no one shows the child the sky. We’re just innately fascinated by it, it’s part of human experience. It’s the commonly known and it’s the mysterious, and we’re part of it, made from it.