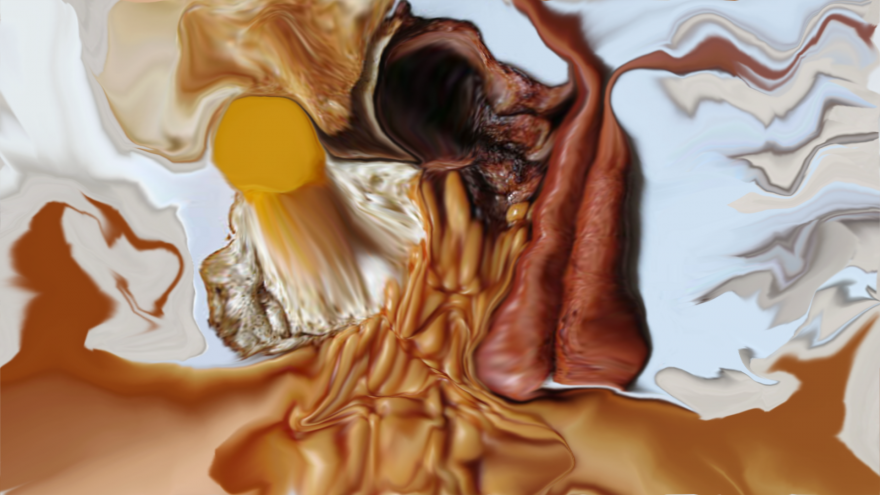 My sister and I used to eat frigid slurries composed of our own ill entertainment when our mother wasn’t looking. The thick, cold slop in our bowls used to be frozen bergs of vanilla dessert, until our silver spoons were plunged in and then whirred in a violent circular motion.

“Oh for goodness sake. Don’t play with your food. How many times?” our mother’s back used to say to us, knowing that turning around would be pointless as it was far too late. She was right, by that time we already had the bowl to our chins, gulping hungrily at the slop as if it were the liquefied organs of our greatest enemies.

misshape form into something unrecognizable

I tell you this as I’ve been revisiting these memories while playing Ian MacLarty’s Full English Breakfast, which distorts the playful act of messing with food into an experimental art tool. It’s the first of three new pieces of software that turn the real into a crooked degeneration of itself, that have us misshape form into something unrecognizable, and to be blunt, exist to fuck with our minds.

Armed with a knife and fork, you attack a sumptuous and hearty full English breakfast. But, oh, it appears that the sausages and golden yolk are only a flat image, and not the delicious 3D foodstuffs they first appeared to be.

What you can do, instead of stuffing your face, is pull the image apart with the fork, pinching it into sharp low-poly triangles. The knife is used to smear the colors so that they become a distant abstraction of the objects they once belonged to.

If you have an impressionist’s talent then it’s completely feasible to draw faces, countrysides, and practically anything that whim takes you to. If you’re anything like me, however, your attempts at artistry will appear more like offal, blended.

Your mission is to find the circle within the time limit. The catch is that this circle is part of a 3D art piece and, well, the view you have of it isn’t exactly healthy.

As you spin the camera around the model, zooming in and out as you wish, you’ll see that each shape leaves a serpentine trail behind it. The effect is flabbergasting, and playing around with it has distracted me far more than the proposed entertainment of circle-hunting.

Yeah, you can enjoy rummaging around this artsy distortion with a beady eye, but creating exotic patterns of spiralling shape-spines can be far more compelling.

Entire Screen of One Game

Can you see that? More importantly: do you understand what is going on? Take a moment to try to wrap your head around it. Better yet, go and play the game yourself.

You’ll notice that it comes with a rather frightful message: “you can’t win the game. it exists only to destroy your mind.”

This is achieved by having the game screen constantly fall in on itself. You control a square at first, just the one. But the camera zooms out to reveal that the entire world is captured inside another, much larger, square. But wait, now this square is in the same reality that it’s just eaten. What?!

Somehow, all of the squares have the world that they exist in printed upon them. Imagine that your skin reflected the whole of Earth back at it as you walked inside of it… but also outside of it, huh? OK, I’ll admit, trying to explain what is going on here is confounding. And spending more time with it doesn’t help, as more and more squares are added until you start to have an existential breakdown in front of your monitor.