I have never been to Paris. In my provincial life I’ve never even left the United States. Despite or, perhaps, due to my localism, I was beguiled by the vision of the city given by Luc Sante in his 2015 book The Other Paris. Sante provides an underground history of the city, of its crime and prostitution, its low-wage work and lowbrow entertainments, its intoxications and insurrections.

As fluent as he is with tales of murderous gangsters and wayward streetwalkers, what really comes across in The Other Paris is Sante’s deep mourning for the lost topography of the city. The book hinges on the two waves of urban reform (one in the 1850s, the other in the 1960s) that swept through and sanitized much of the city into “monolithic high rises with all the charm of industrial air-conditioning units.” These urban reforms turned parts of Paris from warrens of alleys and passages (as in Les Miserables) into over planned boulevards (as in every romantic comedy ever set in Paris).

Sante clearly has a deep appreciation for a Paris-based movement called the Lettrists. They were a Marx-inclined offshoot of the Surrealists, active in the mid-1950s. Sante characterizes the intellectual project of Guy Debord, the Lettrists’ ostensible leader, as “serious dissipation, seriously intended and seriously pursued, which combined pleasure, poverty, chance, sex, disputation, wandering, and the self-conscious theatre of youth.” The Lettrists’ central practice was the dérive, or drift, which took the form of extended wanderings through the streets of Paris to chart the “psychogeography” of the city. They divided Paris up into “ambiance units” which, due to subjective factors like “an effect of light and shadow or an imbalance of scale or a pattern of commerce,” seemed to leave a fleeting emotional trace. The Lettrists wanted to open themselves up to all the contingencies and chances that made such an emotional trace perceptible; in essence, to become expert players of Paris as a kind of game.

It was by chance that I was reading The Other Paris at the same time as playing last year’s Fallout 4. In doing so, the bearing that Sante’s and the Lettrists’ ideas have on open-world gaming became clear to me

Open-world games are, on one level, founded on a principle of dérive, of wandering and soaking up the variety of their landscapes. Playing Fallout 4, I spent the majority of a couple days touring the vicinity of the Commonwealth crater, for no particular end but to experience the psychogeography of that noxious and shattered landscape. The whole game is constructed out of Lettrist-esque “ambiance units”: the light-choking alleyways of the Boston Conflict Zone; the Commons, with the light off Swan’s Pond and the shadow of Trinity Tower; the gouged and barren countryside, which I remember as a succession of broken roads and stark branches against a hazy sky. Though these landscapes are all variations on a theme of apocalyptic menace, the emotional diversity of that menace is crucial to the success of the game.

My cousin once did a playthrough of Red Dead Redemption with both the navigational mini-map and the fast-travel option turned off; he said it forced him to keep his eyes open to signs and landmarks, to remember pathways from one town to the next, and sometimes to drift about in search of activity. Open-world games, at their best, thrive on this openness to accident, this marshalling of a player’s powers of observation and memory. 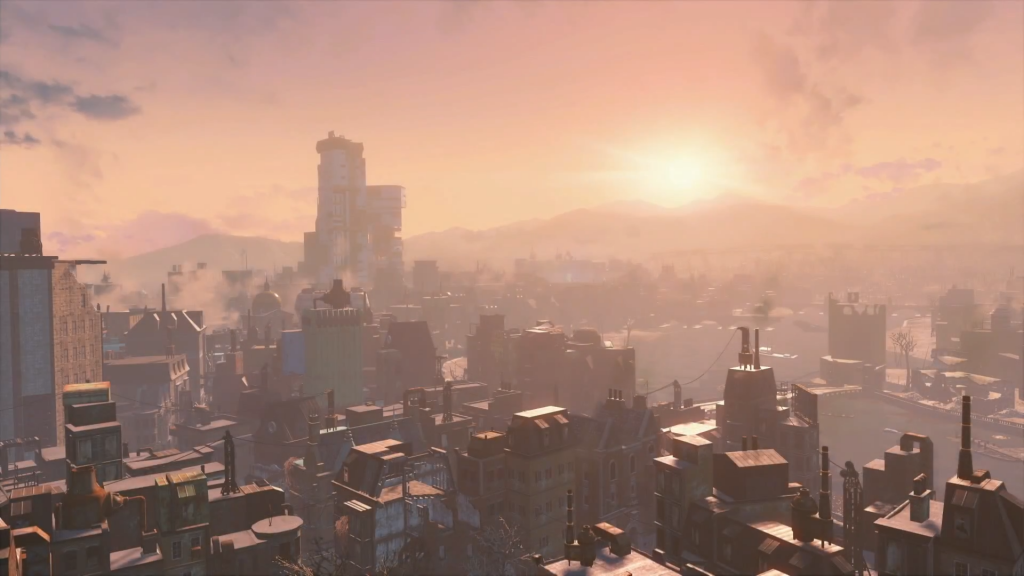 But open-world games also suffer from a creeping instrumentalism, a tendency to view aspects of the game as means to an end. Wherein each beautifully rendered landscape is just another game level to pass. Wherein each carefully art-designed object is just another stat-enhancer. Wherein Fallout 4’s Nick Valentine, an android fiercely struggling with his own almost-humanness, is just another glowing arrow showing you where to stand to trigger a mission.

The struggle here is between two meanings of the word “game”, a specific one and a general one. In the specific meaning of “game” there is a codified set of rules and objectives that designates a field of play. But in the general meaning of “game” there is a radical celebration of frivolity and human freedom, of the wide-open vistas of life. This second meaning is the one that Sante embraces when he implies that the Lettrist dérive through Paris was a sort of game. These two visions of “game” are very close to Sante’s two visions of Paris: one a capital of planning and administration, the other a riot of independence and abandon. While I would never be so bold as to say that open-world games should abandon stats and objectives and structures, I believe that they reach their full potential when an ethic of freedom and chance is taken as a lodestone.

Michael Silverblatt, host of the literary public radio show Bookworm, quotes author William Gass, saying that Gass “thought the that the job of a writer was to wean his audience from stories and to return them to the love of the world, the things of the world, its details, its nature, human nature.” As with literature, as with any art, I think games can achieve this self-transcendence too. I’m always fascinated by the way I feel upon going back out into the world after a prolonged session with a game. Sometimes this feeling is very dark, like after playing too much Grand Theft Auto, when every passer-by looks like a mark or a victim. But sometimes the feeling is sublime, like how playing The Witcher 3 makes me more alive to the wavering of trees in a storm and the varieties of sunsets. Sometimes I wonder why I play games at all, when the world itself is so full of menace and risk, beauty and grace.

Maybe this is all just an elaborate way of saying that I should put down the controller and go to Paris, and see what I can see.