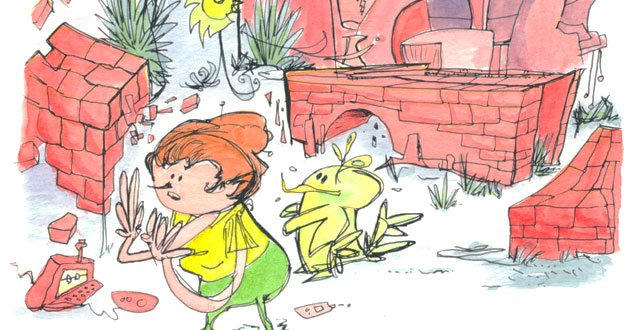 Slowly, I turn the lockpick. I can feel the resistance of the tumblers inside the lock against the pick. I can’t let it break, but in desperation I keep inching, gently pushing the stick, and increasing the tension. “Snap!” I feel myself push against nothing. My heart sinks with real failure; it’s my last lockpick. I’ll have to find another in endless twists of this Skyrim dungeon.

Baroque visual artists of the 16th and 17th centuries had a fascination with optics, creating some of the most striking works of illusionistic perspective in history. Angela Ndalianis points out in her book Neo-Baroque Aesthetics and Contemporary Entertainment (2005) that many of our entertainments have Baroque qualities and are thus Neo-Baroque. Continuing with my comparison of videogames and the Baroque, I am struck that both have used the most advanced technologies of their time to convince people that what they are seeing and experiencing is real.

For example, Andrea Pozzo’s ceiling painting in the Church of Saint Ignatius (1685-1694 CE) creates an illusionistic space, making a two-dimensional image appear three-dimensional. If you want to fully appreciate this work without taking the trip to Rome, hold an image of it over your head and look up at it. In the work are painted architectural features in perfect perspective that reach into the sky. The illusion that these details are real is achieved through tools such as linear perspective, foreshortening, and images with such heightened realism they appear to be 3D. Pozzo’s illusionistic space is described as “quadratura,” also known as virtuosity or a co-extensive space. Quadratura can open up an architectural space to make it appear larger than it actually is, and convince the viewer that there is another, nonexistent space.

Co-extensive spaces were created in the Baroque period to fill the viewer with a sense of wonder. The painting dissolves the architectural space, making it seem as though it goes on indefinitely. Virtuosity blurs reality and artificial reality. Videogames likewise create a space that attempts to fuse the world of the player and the world of the game into one. However, videogames have a few more tricks up their sleeve to confuse perception.

For example, the Psycho Mantis encounter in Metal Gear Solid (1998, 2004) uses “psychic” abilities to read a player’s memory card. Instead of interacting with Solid Snake, Mantis employs direct address, engaging the player by mentioning the games they have played (e.g., “You like Castlevania, don’t you?”). Similarly, Omikron: The Nomad Soul (1999) breaks the “fourth wall” within the first few minutes of the game, having characters tell players that their soul will be put inside the avatar’s body, and instantly attaching the player to their protagonist on a psychological level. Now the game is threatening you as a human being—“you” rather than “your avatar,” a stranger you are disassociated from.

In Eternal Darkness: Sanity’s Requiem (2002), “sanity” is quantifiable, a quality to be lost and gained just like health and magical power; however, the consequences governing this principle are unique. Losing sanity results in faked technological errors: the familiar television volume bar will appear and promptly turn itself down, a fly may run across the screen, or the game will congratulate you for finishing Eternal Darkness, and ask you to please wait for the sequel to be released. When saving a game in Eternal Darkness, the game will occasionally tell you it’s deleting your file. Instead of being horribly killed, like the protagonists of Eternal Darkness, the game provokes the player, threatening to hurt something very quantifiable: the hours of work put into our precious save files. Back then, I gave a sigh of relief when I realized it was a prank.

Vibration is another trick the developers have in their toolbox to convince us of the reality of their created world. Fatal Frame II: The Crimson Butterfly (2003) is the best use to date of vibration as a way to induce fear. The Fatal Frame series uses vibration to emulate the heartbeat of the onscreen character. The more terrified the character becomes, the faster and harder their heart will beat; and the controller mimics this rhythm. Actually, this simulated heartbeat sparked a rumor at a gaming conference I attended in 2009, that the Fatal Frame series had caused someone to faint due to fear while playing it. It made me pleased that I managed to finish the Fatal Frame series without losing consciousness once. The simple vibration causes the player to physically inherit their avatar’s fear and panic, tricking the player’s body into believing the action. When you turn off the vibration, the game is significantly less terrifying, since there is no longer a physical connection between you and the character. Once again you are allowed to play from a safe distance rather than be immersed in the drama.

Like Baroque art, videogames have the ability to not only entertain us, but make us believe in what we are experiencing by seeping into our own reality. Even the perspective of a first-person shooter convinces us, through optics alone, that these events are happening to us, rather than to some fictional character. It’s the reason why I find these games initially hard to play. For the first hour of any FPS, I can’t stand the idea of some creature chomping down on me. My aversion to fear typically results in strange fusions of words like “muffin mix” and “fire truck.” It ends with a lot of gloating when I finally kill the monster that was chasing me.

The beauty is that for a moment, I believed the monster was real—that it was actually happening to me. I felt the lockpick snap. Now I know my heart thuds in my chest when I am overwhelmed by enemies. However, the experience isn’t limited to frustration or fear. I’ve been in awe of worlds and architectural spaces that don’t exist. But they are rendered in such detail that I wonder if they could.