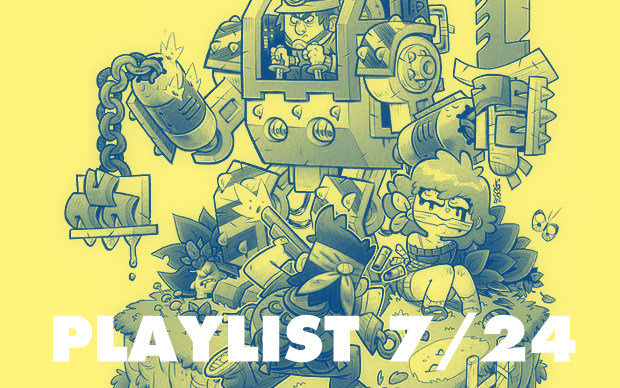 Something always bothered me about the first season of The Walking Dead. The zombie apocalypse was a little too convenient. It was a Get Out of Jail Free card for the protagonist; a chance for the player to feel paternal. For a demented family of hillbillies, it was an excuse to eat thy neighbor. But in the 400 Days expansion, life is a lot less, ahem, savory.

Perfect for: Southern hospitality, zombie BBQ, if you ever thought to yourself Cool Hand Luke should be remade with zombies

Time to play: an hour and fifteen minutes.

Last fall’s successful Kickstarter has finally borne fruit. From the same pixel-loving Canadians who brought us Scott Pilgrim vs. The World comes an unabashed homage to 2D run-and-gun staples Mega Man and Metal Slug. For you new-schoolers, there’s a whiff of modern convenience such as weapon-crafting, upgradeable armor, and four-player co-op. Just know this early access Beta is still ripening. Le Blam!

Most hermit crabs spend a lifetime growing in and out of shells; they fight for the discards like college grads in a cheap apartment hunt. Hermit Crab in Space is about a different kind of hermit crab–she’s got a thing for space ships. Now, she’s stuck in hostile territory and her only hope to escape are the space ship left overs lost in space. Piece together your engines, guns and mods into a getaway ship fit for a space-age hermit crab.

Time to play: a couple hours