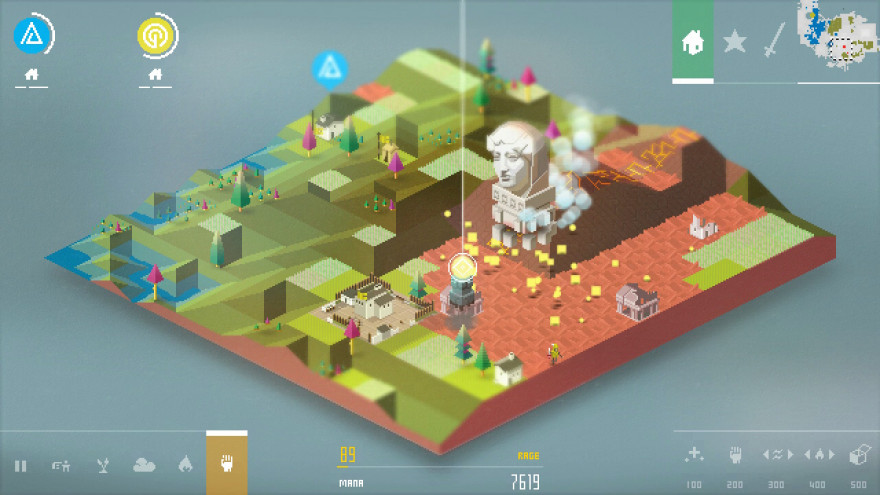 You are Thallos, a mighty warrior with a large tribe and powerful elemental totems. The world is yours … until your jealous siblings act all evil-step-sisterly on you and leave you to die in solitude. Well, put on your ball gown, Cinderella, because they ain’t through with you yet. Inspired by the God game Populous, Reprisal Universe is Thallos’ search for his lost people with the power of nature. Explore the cosmos, learn new totem powers, remind the world how mighty you are.

Playtime:However long it takes to reclaim your title.

This is the kind of game that interrupts gameplay with actual footage of people calling it garbage. The kind that aspires to be viewed as “shovelware.” The kind that claims to be “the unlicensed Bible game that should have been buried in the desert.” The kind about space nuns saving orbital monasteries, featuring narration by no-wave godhead Jarboe. Uriel’s Chasm, in other words, is the kind of game you should play immediately.

Perfect for: People of the “punk games aren’t dead” camp, those who attended Bible school only to find metal instead of Jesus

Playtime: Half an hour.

Twelve a Dozen is a perfect example of educational games gone right. It’s Math Blaster‘s cool older cousin. Twelve a Dozen has you solving math problems, sure, but it’s wrapped up in totally competent platforming,Metroid-esque power ups, and puzzle solving done by the Surgeon Simulator folks, of all people. It’s a bizarre equation, but one worth solving.

Playtime: As long as your math skills hold up.