Imagine a room that smells like cigarette smoke. Not that cloying, secondhand my-mouth-to-yours kind, but the type that’s been around; the stale kind. This is the brand of smoke that, after hours of seeping into its carrier’s clothing, has been brought into the confines of a home and now lives in every carpet fiber, every last breathing crevice of the space. Now imagine this room of old smoke, and add to it the faint scent of lingering cologne, a browning low-pile carpet, an unmade bed with a Scarface poster tacked above the headboard, a copy of Pearl Jam’s Vitalogy sitting on the windowsill.

This is an approximate panorama of my uncle’s bedroom circa 1998, save for maybe an uncapped mousse canister on the dresser and the one crowning curio: A light gray Sony PlayStation that, aside from being the centerpiece of the space, also played a major role in my formative stages. This room was the unwitting fantasy space for my 8-year-old self: A place where I could feel older and more mature than I really was, where I could breathe expired tobacco 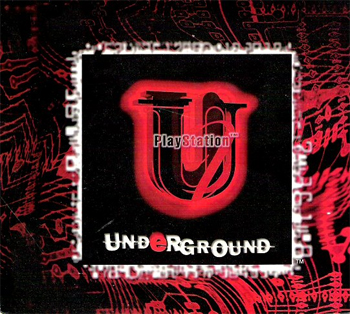 and eat Puffy Cheetos and play Twisted Metal with nobody to step in to say no.

It’s not that others weren’t welcome here. My sister or my younger cousins or my aunt could absolutely come hang out if they had wanted to—but then again: That musk.

My uncle’s PS1 library wasn’t at all suited for kids, but we’d sit there and watch him play anyway, in a state of quiet captivation. Most of these games I had no desire to try out myself—like Resident Evil, which scared the living shit out of me, and Metal Gear Solid, whose stylish bravado was always way over my head. I realize now that these were the classic PlayStation joints (I played them myself only a few years later), but as my uncle would head out for the ‘90s Los Angeles nightlife there was only one game on my mind, and it was a goddamn demo disc: A red-and-black CD marked PlayStation Underground.

The first issue of PlayStation Underground was free for PlayStation owners, and fancied itself a “digital magazine”—but was really more of an oddball marketing tool. Most of the stuff that came in the set was promotional material, presented as a parade of regrettable ‘90s signifiers: grunge typography, neverending loops of generic metal, an obsession with the word “extreme,” all were present and accounted for.

The first half of PlayStation Underground, which my cousins and I spent the most time with, was a small library of demos. I don’t remember whether my uncle actually owned Jet Moto or Mech Warrior or Twisted Metal 2, but regardless, we played those games for hours on end.

The second half of PlayStation Underground is the one I often find myself musing about, if only for how eerily prophetic it all feels. This section of the set consisted of video interviews and behind-the-scenes featurettes with devs like “Tom” Itagaki and David Jaffe, with some surprisingly inventive one-off segments thrown in for good measure. The proto-DLC “Download Station” allowed players to save exclusive content to their memory cards, while another section devoted to the Underground “community” featured comments from subscribers. All of these segments combine to create a primordial, imperfect version of the online marketing cycles we recognize today, with game developers placed on a pedestal as leaders of a jingoistic gamer nation. In relating the story of the PlayStation console, Sony itself frames PlayStation Underground as a definitive piece of the console’s history and in many ways, a reflection of its audience:

Members of the PlayStation® Underground can feel as though they belong to a subculture of intense gamers by experiencing new game challenges and getting the scoop on upcoming games, merchandise, and special offers.

This angle worked like magic on me and my cousins, who would sit there trying to wring every ounce of juice from these discs. For all intents and purposes, PlayStation Underground was a success: Like Nintendo Power and Electronic Gaming Monthly, it served as a spiritual meeting point where self-identifying gamers could listen to their idols speak, and where they could feel like part of a burgeoning community of kindred souls. We had no clue who David Jaffe was, but clearly he had a hand in creating Twisted Metal 2 and that was more than enough to make him awesome in our books.

Self-identifying gamers could listen to their idols speak.

In the days before YouTube and the PlayStation Network, you couldn’t really find this sort of content anywhere else, at least not in the way Underground was doing it. As another in-house magazine, Nintendo Power had been building its own tight-knit community for years, but its aims were always more fluid than Underground’s, owing mostly to the fact that they were a Nintendo operation. Where Nintendo Power featured a grinning Mario mid-jump, Playstation Underground would tack up a photo of the saw-toothed clown from Twisted Metal. Where Nintendo Power opted for multicolor block letters, Underground went with a splotchy courier font.

The main thing separating PlayStation Underground from its predecessors like Nintendo Power was the hyper-narrow lens through which Underground viewed its audience. In one short PlayStation Underground segment, a gravel-voiced man walks viewers through subscription renewal, a process which should theoretically be as easy as walking across the room and recovering a subscription card: “Get up off the couch. Step over the coffee table—nope, nope, don’t look away! Walk through the dirty laundry. It is critical that you make no eye contact here with anyone, or they will try to make you pick things up!”

Some of the stylistic choices here—the room interior’s obvious appeal to bleached-tip cargocore, the bachelor-centric messaging—mark a thoroughly exclusive way to market to an audience. PlayStation Underground wanted to let you know that it had you pegged, but that it was still totally on board with your lifestyle, provided you could find your way to that subscription card.

To an extent, the “extreme” lifestyle angle was par for the course in 1997. The X-Games had started two years prior. Andre Agassi was rollerblading down cliff faces in Mountain Dew ads. Mead had a line of school folders whose grotesque art featured volleyballing iguanas and rollerblade dudes fleeing giant alligators.

But beyond its aesthetic similarities to the extreme marketing trend, PlayStation Underground represents something altogether more insular: An isolated space where the hyper-specific view of the “gamer” demographic  began to mesh with a sense of community pride, eventually calcifying into an exclusive “hardcore” monoculture.

By the time I’d gotten to high school, I’d become an insufferable prick when it came to videogames, passing silent judgement on the Madden luddites and shovelware plebs, as if knowing the development progress of God of War made me part of some elite group. The “hardcore” fanbase, I fully believed, was out there somewhere. They looked like me, they geeked out over the same games that I did, and they all had been brought up in some alternate version of my uncle’s room.

It takes more than one publication to create these paradigms, and it’d be wrong to say that PlayStation Underground somehow laid the entire foundation for the hardcore videogame culture. In a sense, every publication had a hand in its cultivation, from the in-house digital magazines to third-party enthusiast outlets like Electronic Gaming Monthly and GamePro. What I will say, though, is that Playstation Underground presented a vision of the gamer that was so specific that it came to resemble a manifesto, brought to life by its futuristic multimedia presentation and adult-oriented branding.

A vision of the gamer so specific that it came to resemble a manifesto.

In actuality, PlayStation Underground was never anything but a simulacrum. Even since the days of Underground, it has always been pointless to try and picture the “gamer” as a person of one specific gender or ethnicity or lifestyle, just as it’s futile to try and imagine the average moviegoer or the average reader. Even among single bachelors, the one group that was supposed to act along predictable lines, tastes vary to the point where cultural ascriptions become completely irrelevant. My appreciation for an 80-hour RPG doesn’t make me any more “hardcore” than the guy in the apartment next to me who religiously buys every installment of FIFA and Madden. PlayStation Underground’s greatest stunt was to make it feel like this uniformity existed, whether we were twentysomething socialites or their eight-year-old nephews who would retch at the sight of zombies.

It’s both convenient and pleasing to imagine videogames as a place where consensus and harmony can exist independently from criticism. This was the world that PlayStation Underground gave us and, unfortunately, one that never actually existed.

Rose-tinted glasses notwithstanding, it’s now impossible for me to take PlayStation Underground at face value—not just for its cheesy ‘90s affectations, but because of how blatantly it reveled in its exclusivity. Writ large, this is hardcore gaming’s existential crisis: To criticize PlayStation Underground and the demographical rhetoric it ascribed to is to question a long-established identity and the fond memories that millions of people created underneath it. In other words, if I’m to remain conscious of the fact that “hardcore gamers” comprise much more than single straight men in their apartment rooms, I’m actually obligated to wrestle with the negative implications of my uncle’s room.

There are two ways to react to this reality. The first is with anger: It’s one thing to ask people to change their perspectives, and another thing to undermine their fond memories of the good old days. The second way to react is with a cold, exacting realism: It’s fine to remember things fondly, so long as we can acknowledge their consequences. I used to go back and forth between the two, but in the last twenty years almost everything has changed, and I’m more than happy to settle with wistfulness—even if it’s tempered with caution.

My uncle isn’t a bachelor anymore; he’s a married man, living in a nice house across the country. His old Vitalogy CD is either in a landfill or a cardboard box, and I doubt that his room smells like old smoke the way it did in 1997. Sometimes I’m sad to have lost his room as a special childhood place where boys could be boys and nobody could bother us. But, then again, that place never really existed, at least not as I imagined it: My uncle lived in my grandma’s house, and he had a job and a social life and a private life, too. We’d just gotten good at hijacking his space in the off hours.