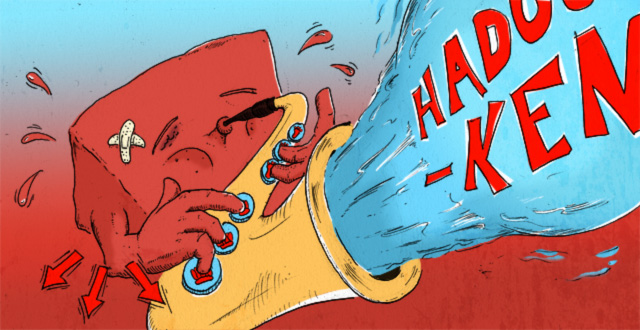 What if I told you that Street Fighter was like a saxophone? Whenever I see a well-played game of Street Fighter taking place, I hear this in my head. John Coltrane’s “Giant Steps” is based on a very technical musical progression, but the composition is largely improvised and spontaneous.

In high school, I played the saxophone, beginning with tenor and later switching to alto. I was pretty mediocre, and I didn’t practice nearly as much as I should have—but I enjoyed the hell out of it. Each year, our band practiced using a lesson book, repeating scales, arpeggios and simple ditties until we could handle ourselves with full, and sometimes rather difficult, compositions. But most of us didn’t play like musicians. We were amateurs, and each time we were told to watch our dynamics or pay attention to the conductor—or most importantly, listen to each other—we buried ourselves in our sheet music and got through the music by rote. We were mechanical. We lacked fluidity, subtlety, or sophistication. And it’s because we weren’t playing. We were practicing, consciously—and not to learn or improve, but just to get the notes down. In fact, we hardly ever played for ourselves or for the mastery and love of music. We played to get through one song after another, simply to complete.

I remember once—and only once—when we truly played. We didn’t, of course, watch the conductor. In fact, as soon as he figured his presence unnecessary, he stopped gesturing. We had repeated the march time and time again, and we knew it almost by heart. One day, out of nowhere, we fell into a flow of pure music. We listened to each other, and we played immaculately—even with a little flair. There was a feeling in the room; it was on the conductor’s face. It was one some of our faces, too.

We were never able to recreate it.

I’m pretty mediocre at Street Fighter as well, but I also enjoy the hell out of it. I began playing a couple of years ago, after seeing my boyfriend playing Street Fighter IV with a friend. “This is magnificent,” I thought. I decided I wanted to learn how to play. My boyfriend became my Street Fighter instructor—he had played in tournaments and I was assured he was a competent teacher—cluing me in on the game’s basics: zoning, spacing, timing, blocking, juggling, combos, etc. It was then up to me to practice my knowledge in the Training stage and against friendly opponents. I began with Sagat, soon preferring Cammy for her speed and dexterity. Now I focus on Super Street Fighter IV’s Taekwondo master, and psychosexual sadist, Juri.

But the massive, gaping differential between myself and great players is still too great. Like with my poor saxophone, I don’t take the time to master the game, to learn the intricacies needed not only to play it decently, but creatively. My significant other refers to Street Fighter as the “chess of fighting games” both for its strategic dynamism and depth and for the level of imagination it affords its players. Masters can win matches of Street Fighter III entirely with well-timed parries, or can blister through a round of Street Fighter IV with frightening speed, powers of prediction, dexterity, and spontaneous creativity. They have learned their scales and arpeggios and ditties. They know how to use Hadoukens to trick their opponent into jumping, and numerous other mind games: this is almost child’s play. They practice constantly, as a great musician should. They learn all the time. They make mistakes. But dammit, they play.

I can’t imagine a more perfect example than Street Fighter for how a game system can treat practice and play. It not only demands a fairly profound understanding of how its mechanics work, but allows players to combine those mechanics in intriguing and unusual ways once they understand them. Once mastery is achieved, the feeling of play emerges.

While I may become lost in the moment, turning myself off from the world, I am not internally dead.

Game theory has adopted Hungarian psychology professor Mihaly Csikszentmihalyi‘s concept of “flow,” characterized as a central goal of game designers to allow the player to enter into a trance-like, purely cerebral state, which allows them to disengage with the rest of time and the outside world and focus on a given task suited to their skill level. In real life, this could mean simply doing a job you are good at. In gaming, it translates to getting the most kills in Modern Warfare 2 without an emotional incentive to care much about the theater of war, for instance; or building the most efficient tower in World of Goo, optimizing my structure to get the most goo balls into the pipe. In those moments, my concern for the game’s environmental message is lost behind my desire to collect the most petroleum. And to be sure, I will repeat a level if I don’t meet its goo-ball quota.

Flow can be valuable because it means that players can become involved or immersed in a game via its gameplay, and enjoy a level of challenge that is neither unreasonably easy nor hard. But the flow state runs the risk of precluding emotional engagement or attachment, turning the player into a cog in the machinery of the game. There is a “flow” in Street Fighter, no doubt, but not of this kind.

Street Fighter, particularly in competitive play, is a system so dynamic that it allows for human creative input, mind-gaming, emotional distress or anxiety, and technical skill to be equal factors in a given match. I have had my own moments of musical Street Fighter flow, where I can feel the swell of skill and confidence rise within me, and while I may become lost in the moment, turning myself off from the world, I am not internally dead. I feel the same atmosphere I felt when I played that march in high school. There is an intellectual and emotional transcendence that occurs with the game that also occurs with chess or playing in a band. It can be felt more easily than it can be properly explained.

Without a mastery of mechanics, this feeling can also be hard to recreate when playing against an opponent. But a well-practiced Street Fighter player can play his or her own “Giant Steps,” using the core rules of the game as a launching pad for all kinds of improvised play.

Few other types of videogames really accomplish this. Most, as it is now, demand you learn the rules of the world by rote, its mechanical basics, in order to reach a win condition. When a mastery of this system is achieved, very little additional meaning can be derived from it. You repeat each Bit.Trip Beat mode until you can predict where to hit each bit that comes at you. You accustom yourself to the physics of Super Monkey Ball to collect your bananas and bust through the required number of gates. You earn 100 percent. What this essentially means is that you are in a constant state of practice, learning not what you can do with the game, but what the game expects of you. If we take music as our litmus test for how we define “play”—as a “free space of movement within a more rigid structure”—then many games are perpetual lesson books.

This, to me, is the difference between Street Fighter and a note-track music game like Rock Band. Harmonix’s Rock Band is built upon the premise of constant repetition, of practicing the same tunes over and over until you can predict the notes, achieve a perfect percentage, and earn five stars. But once you’ve mastered the rules of the game, the mechanics themselves, where is there to go? What can I do with Rock Band once I’ve conquered the track, finished a tour? This might inspire people to take up an actual instrument and learn to play music themselves—Rock Band’s ability to inspire creative play. But in and of itself, Rock Band is not a jazz impromptu, or a cadenza, or the weirdness of aleatory sound. This is not playing a song with flair. This is practicing the scale over and over again until it is drilled into your skull.

You are in a constant state of practice, learning not what you can do with the game, but what the game expects of you.

But perhaps I’m being too hasty. Perhaps the kinds of practice offered in Rock Band and numerous platforming games, like Super Meat Boy, represent a space in between the sensual, musical play state. Rock Band has the simple joys of self-improvement, completion, and the illusion of musical play. Failing a song, repeating it, and perhaps practicing until we get it right is a kind of pattern appealing to our brains. We find the task engaging enough, not so much because it offers play but because it offers an appetizing goal in an often social environment. We like trying to achieve that goal with other people in the room, because there are people watching us, counting on us, judging us.

Super Meat Boy, in a rather different way, is a game of perpetual repetition and practice as well. While play can spring from the joy of discovering all the various ways in which to kill oneself, each stage is really a process of retries: of systematically practicing the controls and altering gestures each time until you either progress by fluke, or by genuine breakthrough. And yet this process, of gradual change, alteration, of playing with the game’s physical possibilities and limitations, does produce a kind of experimentation and creativity which combines the self-consciousness of practice and the transcendence of playing. Much like aleatory music, or an impromptu, Super Meat Boy is confined by general rules, but allows within those rules for cleverness, strategy, spontaneity, and flair. The way this system is utilized actually produces, rather than impedes, a series of emotions: frustration, anger, self-pity, discouragement, confidence, relief, resolve. This takes practice. But through this practice comes play.

The Street Fighters and Super Meat Boys of the world (not to mention numerous hybrids like Minecraft, which introduces a world system to see what the player is capable of doing with it) treat learning their mechanics and patterns not simply as an endgame, but as a conveyor of intimate, powerful experiences. Learning to play means getting past the mechanics and rule sets, and understanding how you, the human, can affect, and are affected by, the game.

It’s not as if I can’t find value or enjoyment in playing Modern Warfare 2 or World of Goo. But as I strive to improve my technical skill, seek the win condition, or repeat stages, I begin to zone out. The space between practice and winning feels empty: I’m just following the rules well enough to win.

Imagine now, if the diatonic system used in Western music were simply the endgame for musicians. Imagine that the only possibilities available to players and composers were the mastery of scales and arpeggios and strictly written, uninspired pieces. Imagine a world where improvisation, or even accidentals or modulation, didn’t exist. Imagine players reduced to playing every note by rote, becoming cogs in the machinery of music.

We could recreate exactly the same collections of organized sound every time, with perfection. We’d get five stars. But we wouldn’t be playing anything.

This is the third of a three-part series. Read part one and part two.