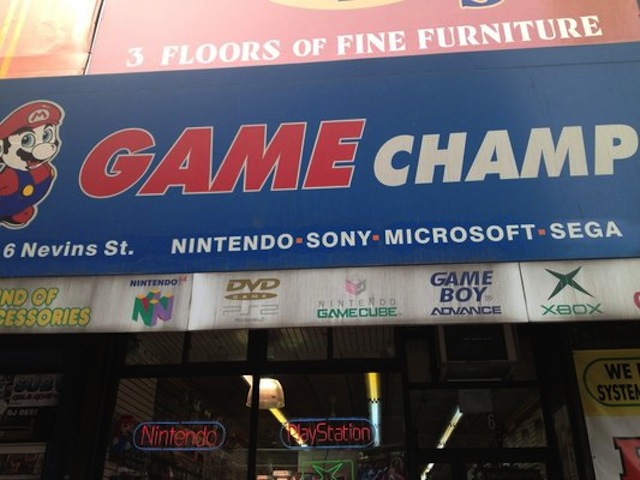 Albert Min stands behind the counter in a downtown Brooklyn outpost of the independent, family-owned video game store Game Champ. A New York institution, it’s been around for 25 years with branches throughout the city – “We’ve been doing this way before anyone else,” Min brags, “since like the first generation of Nintendo.”

Being established doesn’t mean his work is easy. Wearing a black hoodie and baseball cap, nervously shuffling from one foot to the other, Min offers his opinion of selling video games: “This is a tough business. I wouldn’t recommend anyone to do this.”

Min is the manager of this location, a small storefront under an awning covered in drawings of a Mario. It’s tucked between a beauty supply store and a newsstand on a narrow street that juts off at a crazy angle from a highly-trafficked six-lane road not far from one of the three bridges connecting Manhattan to Brooklyn. Related distantly to the family who owns this local chain, Min was forthcoming and frank about the difficulties facing independent retailers in America’s biggest city. He sees lots of problems in his future. And GameStop isn’t one of them.

In 2011, American consumers spent $17 billon on video games according to data compiled by industry research organization NPD Group – almost twice as much as they spent going to the movies ($10.2 billion), and almost three times as much as they spent on music ($6.2 billion). Still, this was actually a decline of 8% from the 2010 number of $18.6 billion, and a continuation of a longer decrease in revenue. The future for even the biggest retailers – like GameStop – is far from certain.
“They’re creating more hard drive space, and cutting out the middle man. I’m the middle man!”

In the second quarter of 2012, GameStop’s earnings were down 11% from the previous year. The end of the current generation of consoles and a lack of true blockbuster releases were the major culprits. Really, though, the headlines have hardly changed in years: “GameStop Gaining Market Share As Industry Sales Decline,” said Investors.com in 2010; “GameStop Earnings: Still Increasing Market Share” said Wall St. Cheat Sheet in August of this year. Investors remain optimistic about the company’s future, but largely based on hypotheticals: next-generation consoles may re-invigorate sales, its online hub Kongreagate, which allows users to play simple online games for free, may grow into a well-trafficked and profitable hub, and it may continue to be a popular place to buy video physical video games online. Honestly, many of these assumptions seem to rest on not understanding video game consumers very well.

Min doesn’t have that luxury. With razor-thin margins and a shifting retail landscape, he lives and dies by his instincts, and is worried by trends he sees developing in the sector as a whole.

He has to trust his gut when buying games, ordering just enough of new titles. Making a point, he reaches to the wall of games behind him and picks up this year’s mildly tongue-in-cheek boobs and zombies title, Lollipop Chainsaw. “Think about it – something like this, “ he says. “It came out for $60. This game is not even three months old. Now, look at the price drop — it’s $40. I purchased this for like $51.50. When there’s a price drop like this, we don’t get price protection. When it drops to $40, let’s say I have 6 left in the store . . . let’s do the math. I’m losing like $12 a pop.” This happens every week, he explains, when he receives new prices for his games from his distributors. He’s in a bind – he doesn’t want to lose the money, but every other retailer has gotten the same memo. There’s nothing to do but lose money and hope that other titles will be more successful.

New hardware, often the most expensive item in a game store, is also is far from a cash cow. Min explains that he makes only $5 profit selling a system. Say the wholesale cost is $195, and its suggested retail price $199. Min has priced systems at $189.99, a loss of $6, just to bring in customers.

“That’s ridiculous, right?” says another independent video game retailer, who would give his name only as Bo. Forty-something and good-natured, Bo punctuates his sentences, especially the self-deprecating ones, with bursts of raucous laughter. “I thought at the beginning, I would have a successful business. But I failed,” he says, laughing. He had attempted to open a combination video game store and gamer’s lounge in Flushing, Queens.  Despite frequent and well-attended tournaments, he was ultimately unable to pay his rent and closed up shop in the summer of 2011.

This is why all video game retailers make their money largely from used games (it’s also why they pay you $2 and resell them for $10). But that market could be going away. Developers already put single-use codes in games that you have to re-purchase if you want to play online as a way to discourage used sales. Min also relates rumors that next-generation consoles will include some kind of DRM that will make re-selling them impossible.

This isn’t what worries Min the most, though, nor do his big box retail competitors. “Competing with Gamestop and Wal-Mart, that’s not what’s scary, he says. “Look at the systems right now. They come out with more hardware space –100 gig, 250 gig, up and up and up. And when you look at Playstation network, they have new release games, ready for download to your hard drive. So, they’re creating more hard drive space, and cutting out the middle man. I’m the middle man!”

The market for used games could be going away.

Indeed, accelerating internet speeds and expanding hard drives mean that in the immediately future, gamers will be able download everything directly. Min estimates that within 10 years, this will be the norm. This is why GameStop has moved aggressively into the online space, attempting to build an online community. Min, for his part, says GameChamp doesn’t even sell physical games online.

Over the course of our conversation, Min gets increasingly morose about his line of work. Even in the best of times, he says, “You invest $10,000, you only get back 10% of that, $1000. Is it worth it to you, to put up $10,000 to get 10% back?” Still, after my tape recorder is turned off, and I’ve wandered away to look at games (I feel acutely like I should buy something), he comes back, invigorated.

“They can’t get rid of us yet,” he tells me, and goes on to explain that game sales figures are reported like book sales – the sales numbers reported around the internet are actually units shipped to retailers, not the units they actually sell. “If they get rid of us, they’ll have to publish the real numbers,” he says with a smile.

Relying on the dishonesty of corporations – it’s a thin hope. Of course, more broadly, Min hopes for something, anything to come along and prove his negative feelings wrong. Ultimately, he just doesn’t know what his future holds.

“We’re taking a chance,” he says. “We don’t know how the future’s going to be, but we try to be optimistic. But who knows? It’s a coin flip, a gamble.”