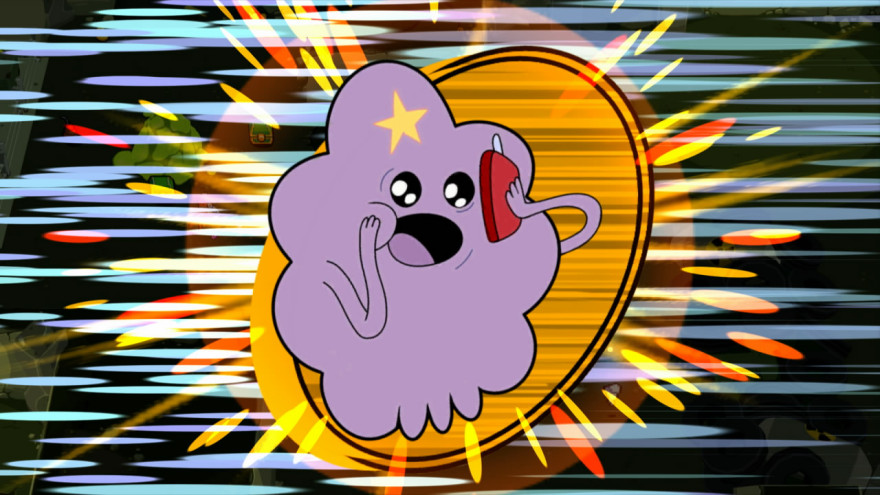 Title:
Adventure Time: Explore the Dungeon Because I DON'T KNOW

Videogames about movies, TV shows, and fast food restaurants have a bad reputation. Cross-promotional games that coincide with the release of a new movie, TV season, etc.—usually referred to as “tie-ins”—live in a strange space between entertainment and advertisement. They’re made for fans of existing franchises who want to play as their favorite characters. But, in terms of quality, they’re usually the videogame equivalent of Happy Meal toys, not well-crafted figurines. While tie-ins always provide the experience of participating in the world of a well-loved movie or show, they usually fail to use that world in service of a good game. Adjectives like “shameless” and nouns like “cash-grab” often come up in conversations about games like these.

But some tie-ins—like the original DuckTales—have gotten it right. Good tie-ins use elements from the franchise they’re representing in order to complement their gameplay. For example, Uncle Scrooge lives up to his namesake in DuckTales by being uber-greedy. He hops around and collects gems as so many other platforming heroes do, but it makes sense for penny-pinching one-percenter Scrooge to be doing it. Explore the Dungeon Because I DON’T KNOW occasionally attempts to make those kinds of connections between gameplay and Adventure Time, but lacks all conviction in doing it. Sometimes it winks at its fanbase through Pendleton Ward’s writing and by putting the show’s voice actors to good use, but that’s all closed off in the game’s wafer-thin narrative. Everything else in Explore the Dungeon reeks of bad tie-in.

Adventure Time’s slightly-older-than-you-would-expect audience loves videogames. The show’s creator, animators, and staff show their love for games in almost every episode of the show, featuring chiptune music, videogame references, and a sentient, adorable game console as a main character. So, if it was made by people who love videogames for people who love videogames, why has Explore the Dungeon come out this close to unplayable?

Explore the Dungeon is a dungeon crawler without most RPG elements

Let’s focus on that title. Explore the Dungeon Because I DON’T KNOW seems to almost perfectly capture Finn’s adventuresome id. As a series, Adventure Time’s stories usually celebrate adventure for adventure’s sake. In other words, we should be excited to explore the dungeon because we are excited by the very act of exploring. Unfortunately, Explore the Dungeon Because I DON’T KNOW never gets off of the ground because it doesn’t inject any joy in the process of slogging through these bland, bluish dungeon floors, mashing the attack button, and picking up one copy-pasted gold trinket every now and then. Finn would give up on playing this game pretty quickly.

On the surface, Explore the Dungeon Because I DON’T KNOW looks like a clever title because there’s a little jab in there at dungeon crawler games, a topic that Adventure Time has visited before. The title picks on the plotting of dungeon crawlers, which often spew some lore and vague political malfeasance at the player before sending them on their way into the titular dungeon, armed with the knowledge that, as soon as they kill everything inside, the world outside will get better. It would have been truer to the game’s title (and the TV series) to drop Finn and company into the dungeon for no discernible reason. Unfortunately, we find out that imperious dictator/occasional love interest Princess Bubblegum has been locking away her enemies for years under the candy kingdom and they’re just starting to foment a bit of prisoner unrest. She hires you out as a mercenary peacekeeper, a glorified nightstick. So, the title’s a lie: You do know the reason why you’re exploring the dungeon. And it’s no fun at all.

As a videogame, Explore the Dungeon Because I DON’T KNOW comes up short in a lot of ways. Level design déja vu lurks around every corner. Enemies are brain-dead and blind. You move at an impossibly slow pace across each of the game’s one-hundred way-too-large floors. And that’s just the tip of the deadly dull iceberg.

But here’s the really criminal one: Explore the Dungeon is a dungeon crawler without most RPG elements. You’re not beating up bad guys to gain experience and level up; you’re beating them up because—wait for it—I DON’T KNOW. Maybe the game’s trying to say that nothing good comes from fighting. After all, your character moves quickly enough that you can just run past enemies. And, since there’s no penalty for not killing them, there’s no compelling reason not to just run through the levels if you’re hell-bent on playing this strangely pacifist game.

You do know the reason why you’re exploring the dungeon. And it’s no fun at all.

Ultimately, Explore the Dungeon fails to copy even the most basic attributes of the kind of game it’s (rather audaciously) mocking in its title. This would be bad for any other game, but reflects particularly poorly on Adventure Time, which, suffused as it is with videogame culture, should have known better than to greenlight this hollow vessel of brand identity. The series put itself at risk by licensing a videogame because the majority of its fans actually have expectations for what a videogame should be. Explore the Dungeon Because I DON’T KNOW flips the tie-in model; more than anything, it’s fan disservice.