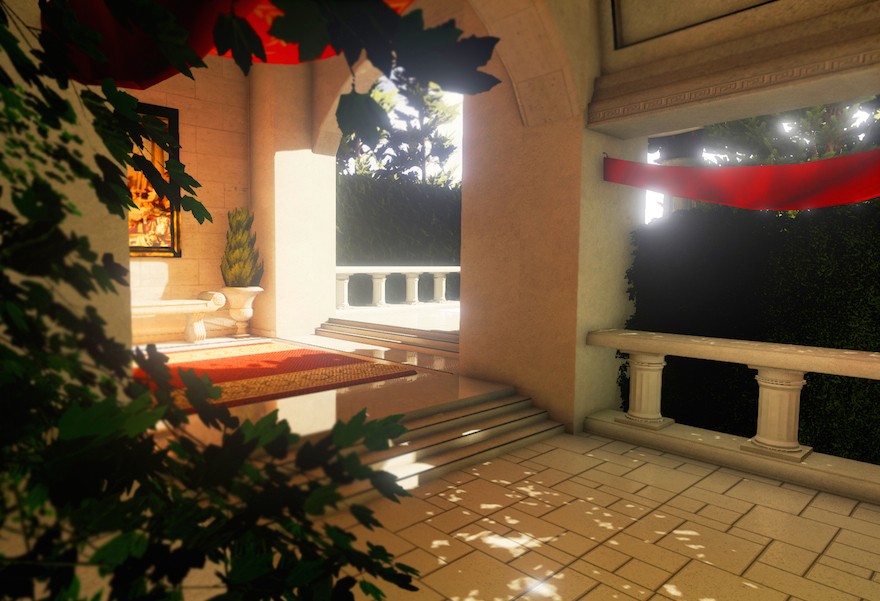 In the beginning God created the heaven and the earth.

And God said, Let there be light; and there was light.

Does this unit have a soul?

“Let there be light” are not the first words spoken by Pneuma, the disembodied self-narrating protagonist of the game of the same name. Instead, as a reticle floats over a black screen, a chipper British voice (Jay Britton) brightly declares, “In the beginning, me!”

This voice quickly declares its own vivacity and the logical necessity of its divinity, and only after this self-consideration is complete does it deign to call the world into existence. A single vertical beam of white light bisects the screen, and directed by the player, at her convenience, Pneuma takes his first steps forward.

Attentive players will quickly realize that there’s something of a problem with this setup. Pneuma, after all, is a puzzle game, a virtual space in which the player is asked to seek and replicate various patterns in order to access new virtual spaces with new pattern-based enigmas. As such, Pneuma is original and cleverly designed, building its challenges around eye-shaped objects that perform their various actions only when they are visible to the player.

This might involve locating an eye in order to open a door, activating eye switches in a certain order, or at times even hiding from a switch’s view in order to produce an effect. Pneuma may have to walk backwards in order to keep a switch in sight, or move forward with his gaze fixed on the ground in order to keep from looking at (and thus deactivating) a visual on/off switch. Most of these mechanics are just perplexing enough to produce the requisite “aha!” moment when the player figures them out.

But none of this explains in any sense how God would come into being and find himself bound by the arbitrary constraints of a puzzle box. In my parochial middle school, we used to entertain ourselves with the conundrum of whether God could create a stone so big that he couldn’t move it, but does the question have any meaning at all if it wasn’t God who created the stone?

Toward the end, Pneuma seems to become aware of this problem. It recasts itself rather suddenly as having been a diabolical Pinocchio tale, with a narrator becoming aware of his lack of control over his own story and subject to an irresistible drive toward annihilation as that story comes to an end.

It is an unconvincing gesture by a game that seems to fail to recognize the disconnection between the philosophical questions it voices and those it embodies in its systems of play. This could be read as a reflection a flighty narrator with a comical lack of self-awareness rather than a quality of the game itself, if it weren’t for the choice of Pneuma as a title, and the in-game definition of pneuma as a philosophical term for the “breath of life, spirit, [or] soul.”

But as a character, Pneuma is an absolutely unsuitable receptacle for questions of spirit or life. Beyond the insubstantial writing behind Pneuma’s largely disposable monologues—where it’s hard to tell how much of the pseudo-philosophical conjecture is meant to be nonsense and how much just ends up that way—it’s difficult to center questions of pneuma, that is, not just soul, but breath, in a being explicitly presented as having no body. As a concept, pneuma invokes not just spirit, by the way in which the concept of spirit is tied to physical embodiment in a manner entirely inappropriate for the bodiless Pneuma. There’s no way to center an idea in Pneuma as a thing, because he isn’t a thing. He possesses no thing-ness. There is, quite simply, no there there.

All of which is to say that the idea of pneuma has as much to do with the second chapter of Genesis as the first, where God not only speaks creation into being, but forms a man of the dust of the ground, and breathes into his nostrils to bring him to life. In this version of the story, spirit—pneuma—doesn’t precede the body. Spirit is a property of the body and the breath that passes through it, in and out, again and again.

And videogames don’t do breathing very well. As a mechanic, character “breath” is rarely utilized, and barely functional—in Wii Sports Resort, a disc packed with digital imitations of physical activities, only the bicycling simulation even bothers with an “out of breath” mechanic. In Mass Effect 2, recorded heavy breathing marks the limit of Shepard’s ability to sprint, but Mass Effect 3 abandons that limitation entirely. Videogames may make our hearts race. We may gasp in fear or surprise, but how often do they really make us short of breath?

And this still says nothing about considering breath as a thing imbued with meaning, an opportunity for mindfulness, or a marker of being. It is difficult to imagine a videogame treating breath as more than a sound effect or an element to be imitated in a character’s idle animation sequence. (Pneuma, incidentally, does neither of even those two things.)

Most games are, like Pneuma, much better at creating worlds out of light alone, coming into being when we look at them and ceasing to exist when we look away. Videogames are entire universes of subjective idealism, where George Berkeley finally wins the argument with Samuel Johnson as the stone disappears from in front of Johnson’s foot. Bodies in videogames are contingencies rather than facts on the ground. There is no ground. There are no bodies.

There is no spoon. If we want to play with the idea of spoon-ness, however, it would be a useful start to at least create a simulation of what it would be like for the spoon to be there. If we want to ask whether Pneuma has a soul, then we have to at least create a simulated space in which that soul could exist, and recognize that speaking is not the same as breathing.

On the rare occasions when Pneuma shines as a narrator, he shines light on some of the pseudo-physical absurdities we often learn to ignore as we become accustomed to navigating virtual spaces. “If I bend my figurative knees and jump,” Pneuma observes, “the world moves downward.” This is, of course, exactly what happens in a first-person shooter virtual space like Pneuma. The environment shown on the motionless display shifts downward in order to replicate the view when we propel our bodies upward within the relative motionless of our physical surroundings. Pneuma notes that as objects get closer to him they get larger, and concludes, not entirely inappropriately for his solipsistic environs, that he, as the object closest to himself, “must be the biggest thing in the world.”

But these moments are too few and too far between, in a brief but well-designed puzzle game that really just doesn’t need them. There’s a strong tradition of puzzle games enlivened by the voices that inhabit their world, but the more I look at Pneuma, the more I am forced to conclude that it would be better if it simply had the confidence to be silent.