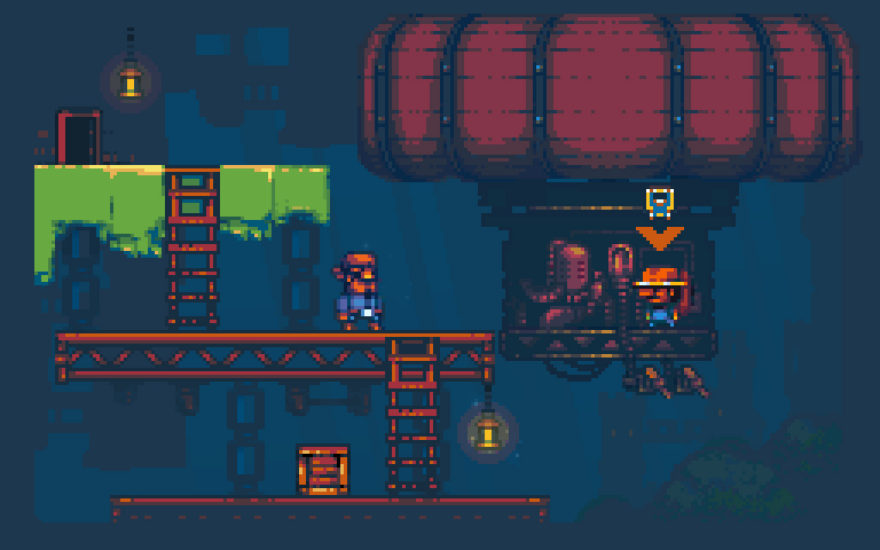 The pixel artist who calls himself “08–n7R6-7984” probably has too many projects on the go. The one that has caught the most attention is RE5734L3R, which follows a robot that makes its way up the class system of a mechanical cyberpunk city by stealing the social chips of other robots. It’s the pixel art and animation that steals your eyes: megacities sit in fuschia horizons, lightning-blue interfaces glitch and garble, bulky spaceships fly through metallic scenery at a blistering pace. It’s been four of five years since the game first hit my radar and it’s still only a piece of tantalizing vaporware.

This is true for many of the artist’s ongoing videogame projects. There’s Journey to Hammerdale, a puzzle-solving adventure set inside a sprawling world of entangled mazes and forking dungeons. Betelgeuse, an arcade-style space exploration game about finding the last known biological human in a future where only artificial beings remain. Spell Masters is to be a turn-based adventure for mobile about casting spells to navigate its charming grid-based environments. And then the one project he did get around to finishing last year is an old-school style, zombie-themed run-‘n’-gunner called Serious Dave.

Practically all of these game concepts manage to provoke the idea of there being a bigger world beyond the screen through the intricacy of the artwork. It’s the weathering rocks, the esoteric engravings, and indecipherable interfaces that really grip me. There’s a sense of deep history to uncover here; a mystery that has been embedded in each game’s world for many years, and you as the player get to go on an archaeological journey to dig it all up. That I’ve never been able to interact with any of these worlds and the cultures to be found within for myself only makes my desire to do so burn hotter. But perhaps I’ve also convinced myself by now that it would never happen.

It was to my utter surprise, then, that 08–n7R6-7984 released another game last week, one called Pocket Kingdom. As with his other projects, it’s the game’s world that immediately jumped out at me—the details and character in the pixel art making it recognizably his, even though it’s restrained so as to be an “authentic throwback to [the] Amiga era.” The game is set in a steampunk city on a floating island that its inhabitants can’t escape from due to it being enchanted by its unseen creator. You play a guy who struggles to make a living who travels to this island to try to take a photo of the Old God that rests there for a well-known newspaper—some quick and easy cash, he hopes, wrongfully. Of course, he gets trapped on this island too, but has the knack to solve the riddles that should help him escape. 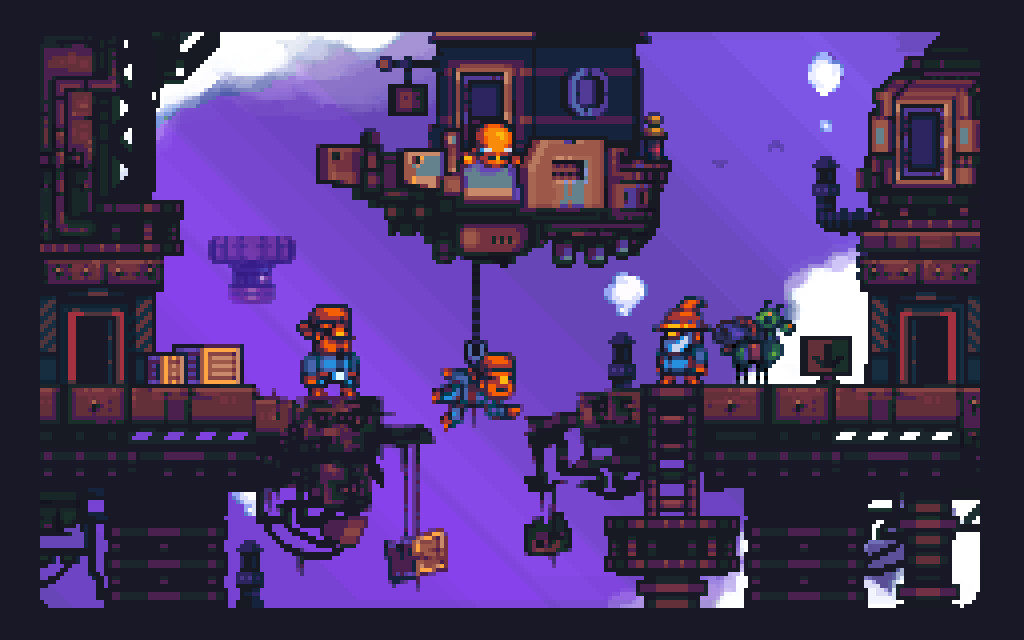 I had to find out right away how this game managed to make it through the quagmire of half-finished game ideas that 08–n7R6-7984 has lying around. “It all began after the release of Serious Dave, that game being quite aggressive with all its shooting, zombies, and gore,” the artist told me. “Therefore, I wanted to take a break from this stuff and make something light and sweet. I imagined an unfortunate traveler getting trapped in this mysterious world and trying to return home. He keeps updating his diary and talks to the locals.”

He made some mockups out of this idea and the person that the artist was working with on RE5734L3R saw them and suggested that they should be made into a game. And so that’s what they did: they acquired a composer and sound artist, a translator and story consultant, as well as a publisher, and committed to finishing Pocket Kingdom. Why this game rather than any of the other projects? I have no idea. I wish I could tell you.

The original mockups for Pocket Kingdom

Perhaps it’s that the pixel art was meant to emulate an Amiga game and is therefore more manageable than the art requirements of 08–n7R6-7984’s other projects. Although this “authentic throwback” to the Amiga isn’t quite what it says. “To tell the truth, I relied more on my personal, subjective impressions while making the art, rather than on technical limitations of the platform,” the artist tells me.He looked at Dizzy and other Amiga platformers and saw something innocent in them that he needed after making Serious Dave. “I wanted to create a world like that, with kind characters, with happy little houses one upon another, with strange lore and setting,” he told me.

Hopefully this is the start of some proper momentum

To keep in line with these influences, then, the artist decided to take a piece of the ordinary world and render it in an unusual state with the help of magic. Each area in the game seems to have started out with an idea and then he followed a process of logic to build the world around it. One example he gave is the District of Tired Lanterns, which is always gloomy due to the cliff and the fog, and so its lanterns never go out, hence the name.

“But [these lanterns] are powered by special crystals mined on the other side of the Kingdom. Therefore, the residents had to make a deal with the pirates who took care of the logistics,” he told me. “The locals also had to deal with strange creatures who became prisoners of this place much like themselves. These creatures speak [a] different language, they follow different logic and purpose, but you have to get along with them, too.”

Understanding the interactions between the characters and cultures of Pocket Kingdom isn’t essential to progress but it does help to unify the logic of its branching city, which you are expected to navigate by yourself (with the help of the notes in the traveler’s diary). For me, it’s a teaser of what 08–n7R6-7984 and his new team—calling themselves 08 Games—can do. Hopefully this is the start of some proper momentum and we’ll see those older projects finished and released too.

“I am definitely not planning to start any new projects, I’d like to finish the old ones first, though not all of them,” the artist told me. “Of course, Journey to Hammerdale is on the list, the game is 50-60 percent ready at the moment. Still, we are not sure yet what game we want to develop next. We’ll discuss it after a short break, we all need to catch our breath a bit.” Watch this space.

You can purchase Pocket Kingdom on Steam.