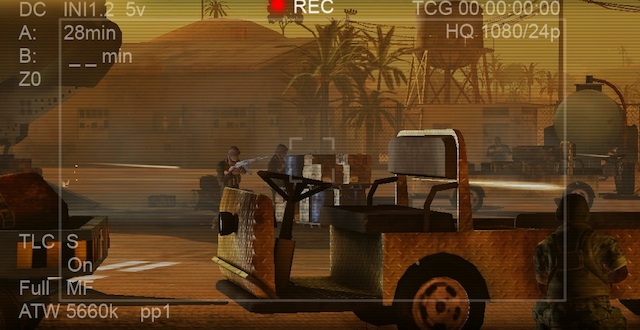 The first-person shooter is one of the most iconic videogame genres. Series such as Call of Duty and Battlefield have brought fast-paced gunplay to millions of players, but their recurrent flashpoint scenarios only simulate a very selective view of modern warfare. Warco, a recent demo from Brisbane-based Defiant Development, looks to widen the frame by putting players in charge of a camera rather than a gun. We get embedded with developer Morgan Jaffit to find out more.

Would you say that Warco aims to be the first realistic first-person shooter?

There are some games in the experimental space that have tried to cover small sections of gameplay and deliver realistic experiences around them, whereas I think our design speaks to a large-scale FPS. I don’t think of it so much as a statement of realism as a statement of a broader frame on the FPS. We really want to cover war scenarios with more detail, more depth, and more exploration of what goes on just outside of all of the action sequences that you see in other games. That said, I don’t think you can argue that Call of Duty is a particularly realistic representation of how warfare actually happens. Hopefully we can get to something that’s more concrete than that.

A lot of that realism comes from the involvement of journalist Tony Maniaty and filmmaker Robert Connolly, who are credited with scripting and directorial work respectively. Both were involved in the recent film Balibo about five Australian journalists killed when the Indonesian army invaded East Timor in 1975. Maniaty even met the Balibo Five just before they were killed while corresponding from Timor. How did they come together with Defiant on this project?

In a lot of ways this is a Screen Australia success story. Tony had the original concept, spoke to Robert about it, and was initially thinking of it as a straight-up training simulator using game technology. Robert used to program on, I think, the BBC Micro back in the day. They decided there may be potential for a full commercial retail game, and took it to Screen Australia who referred me in. We thought the idea really had legs. I’ve always had a passion for the narrative potentials of interaction and the broader practice of storytelling in games—I started my professional career as a writer and designer at Irrational. This seemed like a really good place to push the envelope.

“A mouse click and a gunshot are very similar, from an interaction point of view. They both symbolize the desire to assert influence on a distant object. A camera is exactly the opposite of that, it registers the intention to record information about a distant object.”

What were their expectations and ideas like about games, given that they’re specialists in other media? You mentioned Robert has a bit of a background already…

Robert’s a producer as well as a director. He had a strong influence on some of the visual notes, some of the camerawork and framing, and the pacing and style. Tony obviously comes from the world of journalism and he was deeply concerned that at all points in time we used the actual experience of journalists as our touchstone.

You’re making an FPS, although the term “shooter” takes on a provocatively different meaning. But while there are similarities, gunsights and cameras focus perception in very different ways: where the firearm narrows down to a point or reticule, a photograph or digital image captures a field of detail. What sort of design techniques grew from this—were they markedly different from those of a typical FPS?

The very mode of operation of a camera had a strong influence on the design. The thing about a gun is that it is an analogue for remote intervention. A mouse click and a gunshot are very similar, from an interaction point of view. They both symbolize the desire to assert influence on a distant object. A camera is exactly the opposite of that, it registers the intention to record information about a distant object. That’s where the distinction and the design challenges come in.

A couple of people have asked whether Warco is explicitly a critique of other games, but I don’t think you can say it is any more than you can say that Saving Private Ryan is a critique of Where Eagles Dare. It’s just in a different genre.

The thing I do think is interesting is if you look at Saving Private Ryan as a film, the Omaha Beach Landing has been much mimicked in videogames (I believe the first example was the landing sequence in Medal of Honor). This homage has happened time after time. This is the difference between the form and the function of a videogame. You can talk about a film—the way in which you frame a shot, and the way you set up the action—conveying something about what you’re trying to say. Saving Private Ryan isn’t an action movie; it’s a poignant piece of film.

Medal of Honor is an action movie. So the issue here is that they’re taking gameplay that’s used in Point Blank in the arcades, and even though they’re wrapping it with a narrative experience from Saving Private Ryan the underlying game experience is still point-and-click. There’s nothing poignant about how Medal of Honor handles the theme, and its moment-to-moment gameplay is a reflection of that.

We’re trying to do something different, and we don’t sit in that domain—I feel we don’t have the same limitations.

On the issue of genre or the role the game seeks to fill, the Warco website mentions potential as a training tool for journalists. Have you seen any interest from news organizations?

We have, but it’s important to clarify that those would be substantial and distinct games. It’s not a case of repurposing one to the other: they would be built from word “go” to be separate titles. That was Tony’s original concept and passion and there’s certainly a huge opportunity there.

In most games, players are at the center of events by default. By contrast, part of a war correspondent’s work is finding trouble, being in the wrong place at the wrong time. Will this be part of Warco—perhaps more like the expansive, multivalent level design of a Far Cry than the directed, tunnel-like experience of a Half-Life?

It’s not quite as expansive as a Far Cry. What we’re trying to do is build up a sequence of linked sandboxes. Given that the team comes from a background of open-world game design, there’s certainly a passion for that. There’s a game that we all want to make, that we know would cost 50 million dollars to produce, that does involve those elements of travelling and finding elements that organically appear inside the broader environment.

What we’re going for are those linked sandboxes, so that at each point you’re in an area with 10 or more different stories running through it simultaneously and your goal is to highlight and focus the ones that are interesting to you in the time and limitations that you have. Then you stitch that together into a news report.

The setting seems to be a fictionalized African nation—perhaps similar to the Democratic Republic of the Congo. What was the thinking behind this?

Tony started work on the scenario and setting, and we wanted something that allowed us to engage with real-world issues without being limited by the lead time that you need with a game—to avoid the game being out of date by the time it was released. Thus the slight fictionalization of the scenarios we’re going into. Tony was definitely touching on the topics of revolution in North Africa and the Middle East, and of course the Arab Spring has made that more and more relevant as we’ve worked.

You’ve come up with a fairly fleshed-out player character. Jesse Demarco is a woman with a British accent—is giving her a specific identity an important move, from your point of view?

In the process of writing, Tony spent a lot of time developing Jesse as a fully rounded character. She serves an incredible variety of functions in the game. One of the most striking is that she’s an outsider. In terms of gender and racial background, she’s an outsider with regard to the traditional cultures we’re dealing with in that part of the world. She’s also an outsider insofar as she doesn’t fit in to the Call of Duty or Battlefield mold. It’s deliberate—an outsider’s perspective is right for this; it puts you in the mindset for coming into a new environment.

“Tony was definitely touching on the topics of revolution in North Africa and the Middle East, and of course the Arab Spring has made that more and more relevant as we’ve worked.”

As deaths such as those of the Balibo Five (and, more recently, those of the Reuters journalists in the “Collateral Murder” video released by Wikileaks and Restrepo director Tim Hetherington) remind us, war journalists enjoy no special protections due to their observational role on the battlefield. First-person shooters often rely on a fantasy of easily reversible bodily trauma, whereas Warco’s commitment to realism makes different sorts of demands on how trauma is represented. How will damage to the player’s body be treated?

It’s certainly not in the demo at the moment, but the intention for more sophisticated health systems is there. One of the main things we’re working on is the way we telegraph risk to the player and show them the relative dangers. At the moment we do that through a pretty straightforward regenerating health mechanic that’s obviously inappropriate. It’s what was quick to prototype. These are all issues that we want to display—we want to make the risk and the consequences real. At the same time, from a game perspective, you want to give players some warning that they’re getting into this scenario so they can choose how to approach it, and have some understanding of where those boundaries are in the game space.

Both journalism and warfare are changing rapidly. Have you been aware of any need to “future-proof” the game in relation to those changes—tackling issues such as drone warfare, conflict resources, child soldiers, and other problems that are becoming more important as we speak?

It was precisely the moment when Tony was explaining to me how much war reporting has changed that I got really excited about the project. The specific example he gave was that when he went to Timor, he went with a BBC crew carrying hundreds of thousands of dollars worth of equipment. Now he teaches students who in their first semester break can buy a $5,000 camera and a $2,000 ticket and be in the middle of a war zone the next day. That’s an incredibly different world, and that’s where his interest in coming up with a new way to train journalists came from. That specific example, of someone kissing the family goodbye, getting on a plane and eight hours later being shot at—that’s a deeply powerful image to me and as a narrative launching point, is incredible.

As to “future proofing” the game …we’re attempting to tell a story as ripped-from-the-headlines as we can, with an understanding of the lead time it will take us to make our first game.

So in some ways you’re “present proofing” the game.

That’s exactly right. However, that said, we get really excited about the point where we get our pipeline down, and can actually do stuff that’s responsive. We think the concept of dropping into journalistic scenarios is interesting enough to make this apply in a lot of different places. I can see us building future modules that respond more quickly.