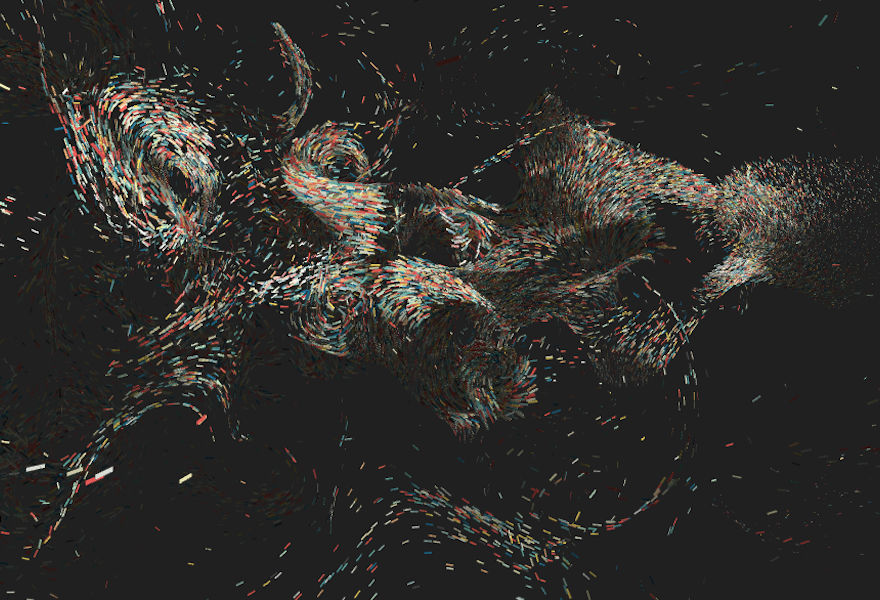 As I tool around with the cascading confetti waves of web developer Jaume Sanchez Elias’ Polygon Shredder, I feel a bit like Moses parting the red sea. Except this sea isn’t just red, but also blue, yellow, white, and I think I saw a little chartreuse in there.

If you ever had a pet tornado in the ‘90s, Polygon Shredder follows a similar principle. As a sort of desk toy for the digital age, Polygon Shredder works by generating a certain amount of multicolor cubes based on your preference, then shredding them into paper-thin strips and tossing them into the virtual wind. It’s a fully customizable experience, setting the confetti to follow your mouse as you move it about and allowing you to adjust anything from the thickness of the strips to how much they rotate to whether or not they pulsate.

It’s stunning just how different these slight permutations of the same experience can be. Set the number of confetti strips generated to “almost none” or “a few,” and they’ll move around like leaves in the wind, almost as if a tornado smashed through a Party City. But change that output to “quite a few” or “a lot,” and the confetti behaves more like a wave, one unified force crashing against itself as it moves to your whims. It’s an odd combination of serenity and power, capturing both the meditative calm of staring out at the ocean, while also giving the user the rush of controlling that ocean.

art that wouldn’t be possible without a computer

As it stands, I’ve only used Polygon Shredder with either a trackpad or a mouse, but I’d recommend loading it up on a tablet if you can. I enjoy the sense of control I get with my cursor well enough, but I have a feeling using my finger would be all the more satisfying, as if I were actually tossing the confetti into the air myself.

Elias’ site is filled with similar projects, including a cloud generator and a lava lamp application coyly titled Bumpy Meatballs. Most are tailored around user-manipulated objects and playing with physics, while at the same time featuring abstract spaces that would be impossible to recreate in the real world. As art that wouldn’t be possible without a computer, Elias’ projects are a great example of the types of boundaries only interactive works can break.

You can check out Elias’ full library of work over at Click to Release, and you can find the source code for his projects on his GitHub.