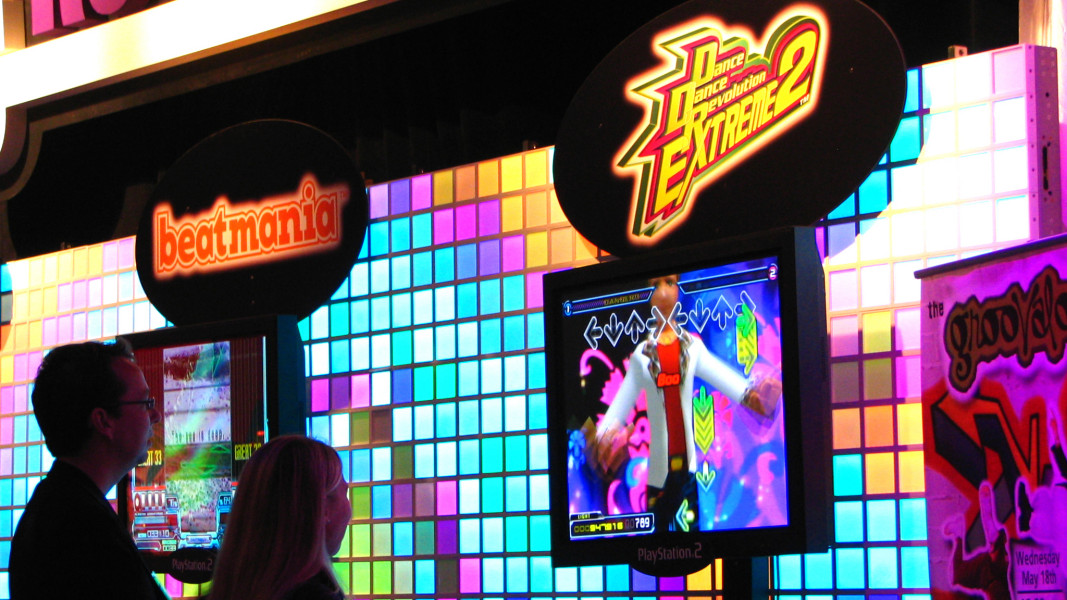 The first dance game I ever played was Dance Dance Revolution. Everybody else at the party watched as I made a fool of myself. Despite the fairly intuitive design—an arrow pointing up clearly indicated I had to step on the panel in front of me— the game felt impossible. The plastic mat slid everywhere, the seizure-inducing backgrounds distracted me, and the arrows disappeared at the top of the screen before I got the chance to squash them like little technicolored bugs.

Although I vowed to never try it again, DDR’s growing popularity amongst my friends made it impossible to ignore. I played and trained and I fell in love with the variety of electronic dance music Bemani offered, including Eurodance, Jpop, and trance. I visited arcades specifically to play DDR and got sucked into other dance games like Pump It Up, Para Para Paradise, and In the Groove. And I could talk to other people about them. Pretty soon nearly everyone in America was at least familiar with this style of arcade game.

There’s no doubt that DDR launched a cultural phenomenon. Even so, the North American spread of DDR couldn’t compare to the successes of American franchises like Guitar Hero and Rock Band. Performing “A Hard Day’s Night” or “Enter Sandman” appeals more to the average American than stomping to bubblegum dance music. Several dorm rooms at my college had plastic instrument setups; mine was the only one with a metal dance pad.

But the new decade brought dance back to videogames, more fierce than ever.

In the past few years, American pop music has started to sound less like the music of Guitar Hero and a lot more like that pulsing stuff of DDR. Electronic dance music exploded again—its heavy synths and wobbling bass can now be heard across popular music as the voices of Ke$ha, Usher, and Rihanna extoll the virtues of the dance floor. Meanwhile, motion controls introduced a new way to play, both to longtime console owners and to casual players drawn into games by the novelty. The time was simply right for the evolution of dance games.

I first played Dance Central on a demo stage smack in the middle of an expo hall. I was a bit apprehensive to play a new game in front of so many eyes, but my friend convinced me to try it out with her. The song started up and I had a few seconds to take a deep breath and analyze the dance moves crawling up the screen. As I mirrored my avatar’s simple, repetitious moves, I began to relax and lean into the familiar ragga/dancehall sound of Rihanna. When it was over I didn’t bother to check my score. Even though I had never played a game like it, I left the stage feeling much more confident than I did after I first played DDR at that party. Dance Central left me with the impression that almost anyone could play.

This ended up being pretty much true. I noticed more and more people not previously into dance games—or even videogames in general—trying out Dance Central and Just Dance (and it’s no coincidence the latter shares its name with a hit by Lady Gaga). It just takes a couple brave souls to play the first song, and then more and more people become willing to give it a shot. In this regard, it’s funny how these games mirror the social atmosphere of actual dancing. If just one person cuts loose at a party, then pretty soon the whole place starts moving. Humans will always want to dance together; they just need an excuse. These new dance games help facilitate that desire, cutting out any unintentional gatekeeping of previous games. 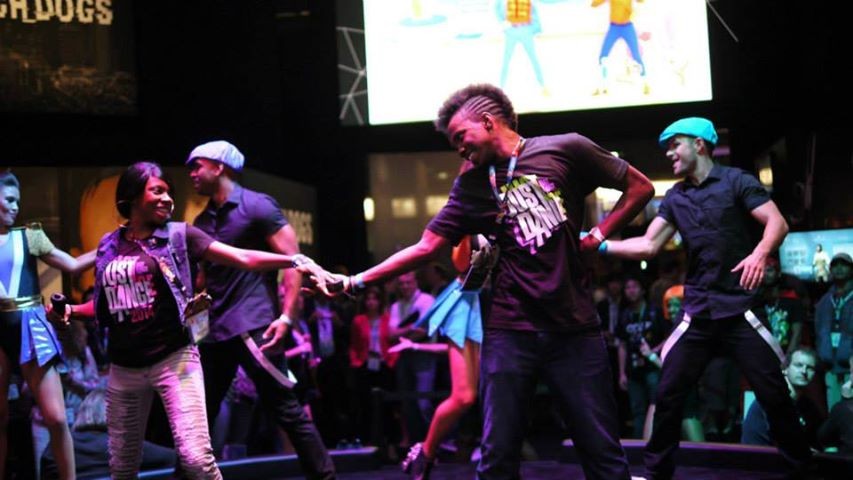 However, not all motion control dance games can boast the same amount of success. Konami tried throwing its hat into the ring with Dance Masters (Dance Evolution everywhere besides North America). The producer, Naoki Maeda, adamantly stated “This is real dancing,” suggesting the popular thought that his previous games were not. Unfortunately, most Americans don’t want to move to Europop, and I’d safely guess most Bemani heads weren’t into “real dancing” enough to buy a Kinect.

As Maeda insinuated, games like DDR were never considered “real dancing” to the mainstream. Everyone knew about them, but most people watched from afar. That’s why the 2000s were rife with references and parodies in popular media, like South Park and Malcolm in the Middle. Even if they were fun, and borderline-disruptive videogame experiences, and great exercise, at that, all that mat-stomping made the game an easy punching bag. That’s why you have two geeks DDR-battling it out in Grandma’s Boys while post-makeover Katy Perry parties with Just Dance 2 in her music video “Last Friday Night.”

Maybe if the States had a more roaring arcade scene, rhythm games like DDR would have had a stronger following. Although my friends and I frequented arcades in high school, we were the exceptions. Arcades give the ability to play rhythm games without investing in heavy equipment, but without that culture we miss out. As a result, most Americans have never heard of more recent Japanese music games like MaiMai, Sound Voltex, Jubeat, and Reflect Beat. Not sure how much they’d dig MaiMai anyway, which costs $13 grand and looks like LED buttons set along the door rim of a front-loading washing machine, with a circular touchscreen in the middle. Oh, and with a camera recording you the whole time.

Maybe if the States had a more roaring arcade scene, rhythm games like DDR would have had a stronger following.

Some things will remain niche. But it’s hard to imagine the dance game more democratized than Dance Central. For one, you don’t need a cumbersome peripheral to play, and the peripheral that it does require (the Kinect) isn’t exclusive to it. All of the motions are right there on the screen, and even if you do look silly (you will), it does resemble real dancing. There’s a much higher chance of everyone finding songs they enjoy or at least recognize. That’s the magic of dance music, I think—even if it’s not life-changing, there’s bound to be a beat you can enjoy on a visceral level. Pop lyrics go hand-in-hand with this: drinking, hooking up, having reckless fun that everyone comes out of un-scarred.

Which, to go back to pop music at large, is part of the reason why “Gangnam Style” exploded: despite, or because of, the language barrier. It became the most viewed video on YouTube over a year ago, and it’s still going strong at 1.9 billion views. (It is featured in both Dance Central and Just Dance.) I imagine people practicing the song over and over in preparation for an upcoming wedding where the DJ will inevitably play it. As people get accustomed to experiencing pop music via YouTube (the videos dominate the site’s Most Viewed Videos playlist), they become more willing to experience the club through their TV screen, rather than behind some cover charge. 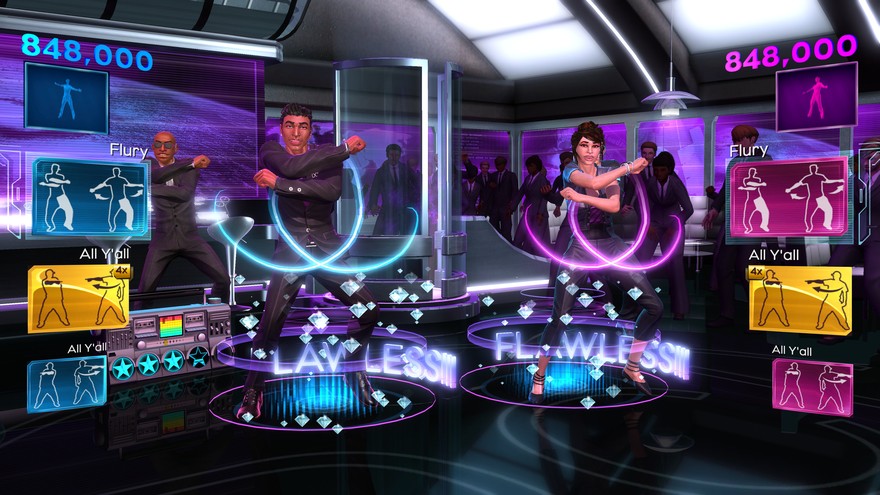 The party can’t last forever. Music industry pundits claim the EDM bubble is set to burst any day now, and videogame pundits think the dance game craze has already peaked. There are a ton of new, creative ways people are experimenting with music in games that don’t involve dancing. Harmonix may have stopped releasing new Dance Central 3 DLC, but its upcoming Fantasia: Music Evolved puts the player in the role of a conductor. I’m curious to see the new ways we interact with games as motion control technology improves. I just hope we keep dancing. Life’s too short to stop. As the great thinker Nicki Minaj has told us: “Get on the floor, floor, like it’s your last chance.” Indeed.