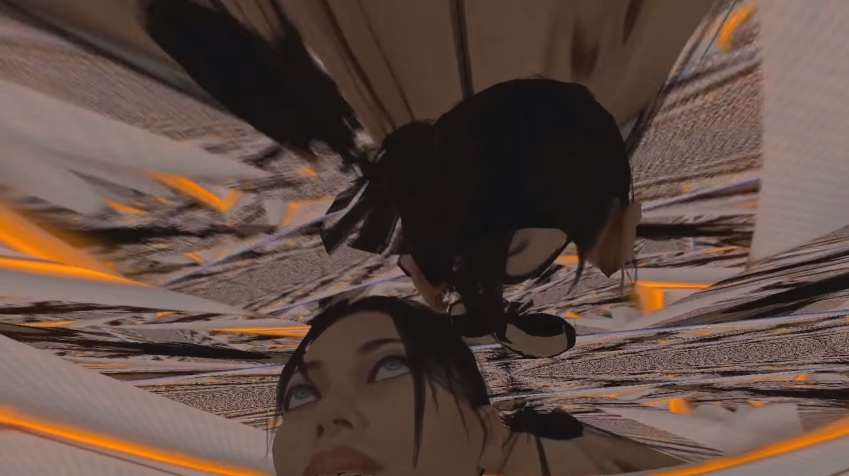 Where have you gone?

This is your fault. You chose this path. The Aperture Science testing environment has been proven entirely safe for each test subject. Yet your typical violent behavior towards the equipment has proven that false.

Are you dead? I told you: When you’re dead I will be still alive. I said that. Remember? I warned you. I did. It was not a lie.

Now you have broken my heart.

Chell is floating in eternity. She is surrounded by both an endless nothingness and countless duplicates of herself. It’s like someone melted all the mirrors in the world down to liquid and created a huge lake of crystalline reflections out of it with Chell at the center. She looks perplexed. She looks distressed. You can see it in her eyeballs as they leer mindlessly in confusion. Chell isn’t alright.

This is the result of a Portal 2 (2011) experiment by YouTuber “CrowbCat.” To use their words, they crushed Chell between two portals. As you can watch in the video (above), a portal is placed on the flat surface of two opposing crushers—one on the ceiling, one on the floor—creating a loop between them. If Chell falls through the bottom portal she emerges from the top one, falling once again towards the bottom portal. Ad infinitum. This is a trick that you can perform in both Portal games (there’s even an achievement connected to it) so it’s nothing remarkable by itself. Where this experiment does hit new ground is the addition of activating the crushers.

a beautiful series of wormhole art

The crushers allow the portals to move. This is something that was new to Portal 2 as previously they could only be static when shot on to a surface. Valve needed the portals to be placed on moving panels as, in Chapter 5 of Portal 2, this is how you cut neurotoxin generator tubes using a laser (watch it here). Even so, it’s one feature that Valve didn’t allow players to mess around with much, not even in the level editor that shipped with Portal 2. CrowbCat explains that to set-up this scene with the crushers and portals, they had to use a “special command” inside the Portal 2 SDK (software development kit) that allowed the portals to be placed on moving panels.

The result: As Chell is falling from portal to portal, the crushers are activated and the space between the two portals is reduced to nil. The game’s systems are not equipped to deal with this. And so Chell is trapped inside the portals. But rather than being crushed, she is instead caught inside some other realm; a terrifying limbo.

“It resulted in infinite psychedelic visuals such as giant spirals, never-ending walls, and gigantic perpetual portal rooms,” writes CrowbCat. “Scary at first when you’re face to face with yourself. Such visuals potentially can trigger anxiety about mirrors and stairs to some people. There is no way to get out without restarting or using cvars. Chell doesn’t die by doing this, and it looks like there’s no gravity anymore.”

But the kaleidoscopic visuals provided by this perpetual glitch-world aren’t the entire highlight of the video. CrowbCat removes the game audio, adds the mysterious notes of Self-Esteem Fund—one of the quieter and more contemplative songs of the Portal 2 soundtrack—and then cuts together a beautiful series of wormhole art. The obvious touchstone to compare it to is the wormhole scenes in Interstellar (2014). But in tone it more closely echoes the thought-provoking slow-takes of Andrei Tarkovsky’s Solyaris (1972). Either way, it’s a mesmerizing way to spend a couple of minutes.