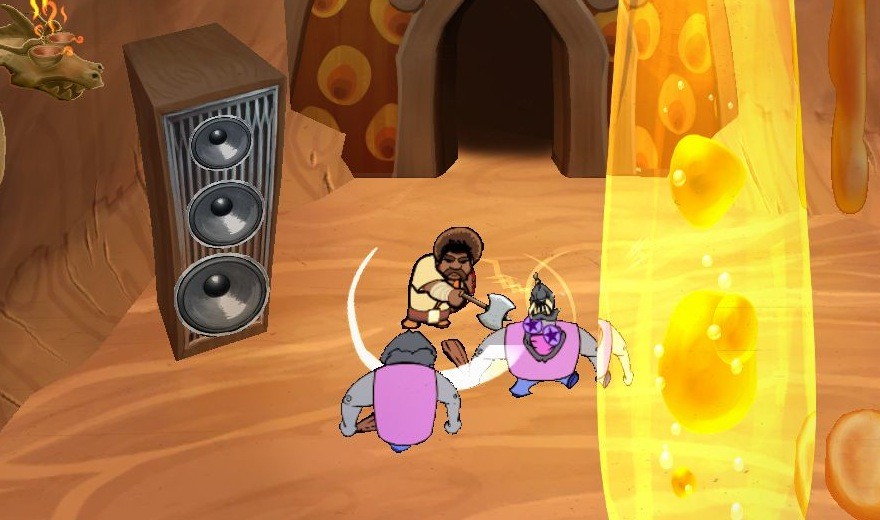 The only reason I can figure Kim Swift is releasing Soul Fjord on January 28th as an OUYA timed-exclusive is because the little cuboid console fondly reminds her of the Portal cube. That, or money. In either case, we have the first footage of it in action, which you can scope at the 1:15 minute mark in the trailer below.

In case you’re wondering what’s up with the Soul-Train-meets-cartoon-vikings theme, the ex-Portal designer told us last year, “We ended up with 70’s funk and soul which seemed great from a music perspective, and Norse mythology which was fantastic from a character and world design perspective.” My first thought was Blacula meets valkyries.

The presser we received explained Soul Fjord as a “rhythm roguelike,” which in non-gaming-jargon means that you push buttons in time to cues scrolling across the screen. And that you die a lot. And that a funky bass line kicks in when you’re doing well. I personally prefer the term “Rhythm and Rogue,” but whatever you call it, this blending of music genre with role-playing staples is something we’re beginning to see and will probably see a lot more, with Crypt of the NecroDancer picking up plenty of nods from the Independent Games Festival. It serves as continuing proof that anything can be RPG-ified.