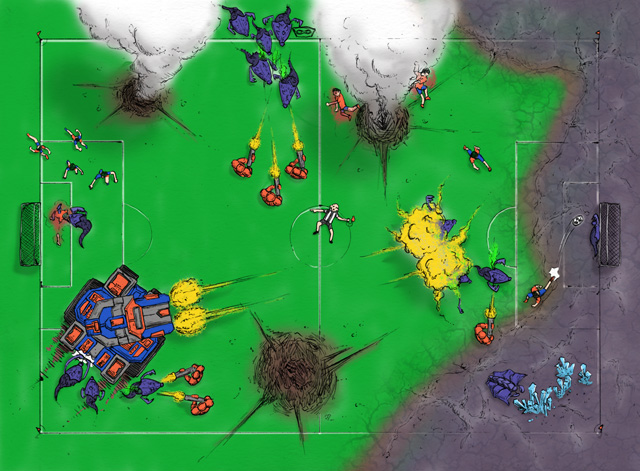 If you see superstar international soccer players like Didier Drogba and Demba Ba line up for their teams at the Africa Cup of Nations this month, it will be hard to imagine any connection to the sharp finger work of, say, a young Korean playing FIFA, staring calmly at a screen in a television studio in Seoul. The tournament, held this year in Equatorial Guinea and Gabon with a lot of help from Chinese investment into stadiums and infrastructure, has received a considerably smaller level of media coverage than both club and country tournaments in other parts of the world. Correctly or not, it’s considered a purer soccer experience: with less hype, the soccer can speak for itself. There’s less of the conservatism you might have found at the 2010 World Cup, and fans have yet to become the self-loathing cynics of many failing Western teams. The impoverished African host countries could hardly be more different than the competitive, technologically advanced economies of South Korea or Germany, two places where e-sport, that questionable moniker, has become popular.

E-sport is the term given to competitive videogaming, and comparisons with sports have spread through the language used in tournaments. Major League Gaming, the Electronic Sports World Cup, the World Series of Video Games: you can see where this is going. Prize money is doled out by competition sponsors, or by publishers as part of a game’s marketing budget. Teams and players receive sponsorship from relevant technology companies like broadband providers and computer parts manufacturers. Still, at least it’s not McDonald’s, right? The growth of e-sports and the remuneration it offers has been steady, with events getting bigger and the stacks of money getting taller. In June 1997 Microsoft held a Quake tournament where the first prize was a used car: developer John Carmack’s Ferrari. In 2011, both Valve and Activision offered million-dollar prizes for tournaments involving Defense of the Ancients 2 and Call of Duty: Modern Warfare 3, respectively.

But, as they say, is it a sport? There may never be a global gaming superstar in the vein of Michael Jordan, but pro-gamers have been invited to meet heads of state, taken part in national advertising campaigns, and had finals broadcast on television in front of large studio audiences. Even controversial transfers of players between rival teams have taken place. It’s relatively easy to accept that e-sports and real sports share a need for extraordinary technical ability. Cynics point to the lack of physical exertion in the former, no matter how drenched with sweat players might be after a few stressful rounds of StarCraft. But whether gaming is or isn’t sport is irrelevant: more interesting is that the community allows the comparison. It implies the professionalization of a popular pastime, with a lucrative business model bolted on, and suggests celebrity status for its most successful competitors. All, to an extent, are true.

Real sports and e-sports become legally entangled when sports videogames are played competitively. FIFA the e-sport has an interesting history. People have been playing the EA Sports series competitively, for money, since at least 2000, when it was included in the World Cyber Games Challenge in Seoul. In Germany in 2006, the World League eSport Bundesliga was broadcast for one season on national television, before being shut down by a copyright claim. Bundesliga, which is the name of the professional fußball league in the country, translates as “federal league,” so that wasn’t the problem. Instead the company’s logo bore too much resemblance to the UEFA Champions League emblem, and was swiftly taken off the air in an attempt to avoid a six-figure (Euro) fine. The game has had very different struggles at broader e-sports events, where FIFA finds itself some way down the hierarchy of videogames—with prizes adjusted accordingly. DreamHack Summer 2011, the Swedish “digital festival,” offered the winner of its StarCraft II tournament the largest prize: roughly $30,000 cash. FIFA Soccer 11, meanwhile, was only worth $2,800 worth of merchandise to the winning player in a 1v1 competition.

FIFA is less a simulation of a sport, and more akin to a war game.

FIFA gaming certainly takes place on a less even playing field than the likes of StarCraft and Counter-Strike. While the three races in StarCraft are unique, their attributes have been painstakingly balanced to allow the skill of the players and the soundness of their decisions to dictate the outcome of a round. Each team in FIFA is also unique, but—being modelled on a real-life club—no attempts at balance are made. Yes, teams will have standout qualities and require different tactics for success, but it is difficult to celebrate a victory when a loss can be put down to your opponent having played as a “better” team. With freedom to choose from hundreds of teams, most players will pick from a select few, those considered the world’s best: Barcelona, Real Madrid, Manchester United. It’s not surprising to see the team you chose facing off against itself, like Jet Li in The One. Or for a club team to play an international side, even with identical players on each side. Any real-life allegiances tend to be thrown out of the window by anyone who actually wants to win.

So why use FIFA in competitive gaming? Aside from the videogame’s superlative international popularity, it requires a high level of mental and physical dexterity; its players and audience are intimately familiar with its rules ; and matches remain interesting through variation in playing style, team attributes, and the way these work against each other. In short, FIFA is less a simulation of a sport, and more akin to a war game.

A never-ending list of violent metaphors in sports and sports commentary compare playing games to waging wars or even just a straight-out fight. FIFA’s announcers, a particularly droll set of English television pundits, are happy to continue this tradition. It seems narrating fake soccer matches in a studio doesn’t quite allow these middle-aged students of the game to shriek and holler like they would on a real match day. It must be that British reserve we’re apparently so proud of. But the script is fairly authentic, perhaps because soccer commentary can be this generic and disjointed in real life. “That goal was a sucker punch!” If you think boxing metaphors are an insightful way to describe nearly anything, you’ve come to the right sport. Eventually, the repetitious soundbites etch themselves into the memory. These two teams are really battling it out; they’re fighting for possession, and the spoils of war are the points added to the league table or progression to the next round.

On the virtual field, these pitched battles may be endlessly repeated. If you’d fought a real battle or played a real game of soccer, stepping back out onto the churned turf would be the last thing you on your mind. But in videogames, the terrain fixes itself up in an instant, ready for the next round. Likewise, casualties can shoot again with their broken legs, and the most exhausted athlete can stand up and sprint. FIFA knows it’s a videogame and it demands to be played like one.

As in the Total War series, time stands still at the start of each match, allowing players to arrange their lineups to maximize the tactical advantage. Formations are like battle plans: defenders are archers at the back throwing up long balls; forwards are battering rams at the front crashing through the opposition. Your resources are those indefinable combinations of statistics that lead to scoring: the amount of time you have possession of the ball, corner kicks, shots on goal.

It is the epitome of the modern, Western game: snarling, tribal fans; the loss of sportsmanship; and the rise of money in a capitalist society.

In any moment, meanwhile, you only have enough fingers to control one or two of your 11 players. Whoever has the inverted triangle above him has, by my calculation, 15 different ways of kicking the ball away from him, four types of running with the ball, and an incalculable number of flicks and tricks to be done for the purposes of showboating. It follows that the other members of your team are liable to misbehave. In a real-time strategy game such as StarCraft, your units mostly do what they’re told: mine here, defend this, attack that base. In FIFA, the multidirectional analog control means that a pass may not head in quite the direction or at the pace you were expecting, and the runner you just sent scampering forward may not find the space you were hoping for.

There is one bouncing, inflated exception to comparisons between FIFA and other videogames—the single ball that happens to be the most important part of any match. A game of FIFA isn’t about playing to the rules of soccer; it’s about exploiting the rules of soccer as implemented in the videogame. Any foul (a trip, pulling a shirt, handling the ball) in the penalty area around the goal results in an automatic penalty kick—a free shot at goal from 10 yards out, one-on-one with the goalkeeper. Against a team defending aggressively in FIFA, it’s a little too easy to get oneself fouled in this area by running with the ball around a group of computer-controlled defenders, any of whom might automatically try to tackle and end up tripping the attacker.

At a goal kick—where the goalkeeper restarts play from his end—the attacking team can strategically position a player between the ball and the closest defender. If the player taking the goal kick decides to play a short pass, rather than booting it long, the game doesn’t recognize the danger—and passes the ball straight to the opponent (rather than a more open defender), who now has an easy shot at goal. Among friends, you’d expect the ball to be passed back in fairness. Competitively, you can expect to be punished.

If the soccer being played by national heroes on the western edge of central Africa presents sport as being about peace—as proven by Didier Drogba, who is credited with using soccer to secure a ceasefire after five years of civil war in the Ivory Coast—FIFA tells us that it’s about the language, the tactics, and the injuries of war. It is the epitome of the modern, Western game: snarling, tribal fans; the loss of sportsmanship; and the rise of money in a capitalist society. FIFA is still at the top of the all-formats charts in the UK, despite being released in September last year. These two contrasting images, as well as a third, different picture painted by FIFA’s small role in the burgeoning e-sports community, suggest that professional soccer, in all its forms, acts as a kind of global religion. Adapting to fit disparate cultures and economies is the only way it can unite the world.