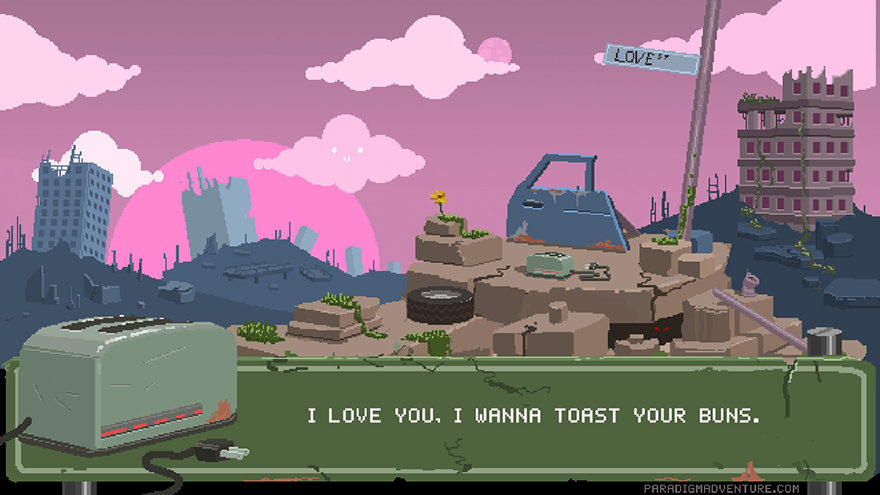 “If I ever had rust, would this bother you?”

You’re halfway through a second glass of wine at this point. Tina is sitting on the table across from you, anxiously awaiting a response. Her body is shapely—mainly square, but boy do those four corners look sharp. The shiny chrome of her skin reflects the sun, bright and hot. The two slits located at the top of her form contain soft, delicious pieces of bread just begging to be warmed up. Tina is a toaster. You don’t judge. There’s no room to be picky in the post-apocalypse, and this was starting to get pretty toasty.

“Nothing like a bit of coarse roughness to grate away at my skin…” You respond, offering her a wink. She turns red—from embarrassment, or because she was plugged in somewhere, you aren’t sure. After a little while of exchanging pleasantries, it’s time to get down to business. No WD40 required. You reach across the table and place your fingers gingerly at the base of her lever.

Post Apoc Dating Sim is a mini-game featured inside the upcoming point-and-click adventure title Paradigm, created by Jacob Janerka and Jonas Kielberg. “It was originally a small Kickstarter stretch goal,” Janerka explained. “However I had way too much fun with it so I added much more than planned.” The mini-game is pre-loaded on a MegaBro Dupagen (“basically, a Sega Game Gear“), which is used in Paradigm for fast travel. “Clearly, people would want to experience the intricacies and difficulties of what it would be like to date a cross duck-human species”

Watching them pleasure a toaster

Or, perhaps, a toaster. Janerka tweeted out an interesting observation made while showing off Tina—the toaster you can date in the game—at events. “I brought it to a local convention as a side thing for people who have played my Paradigm demo already. It ended up working out way better than expected,” Janerka said. “By far the most satisfying thing is when people date the toaster and get to the end of the ‘date’ and have to fiddle with the toaster.” By the time players figured out the mechanic, they’d realize that they would have to move the lever up and down multiple times. After that, reality would set in: other people in the room were watching them “pleasure” a toaster.

How does one go about satisfying a duck-human or a toaster in the post-apocalypse? It starts off with a questionnaire, similar to 80s dating shows as opposed to the traditional dating sim formula. “After you are finished with the questionnaire you go into ‘foreplay mode’, again according to their bio/personality you use appropriate foreplay to make them happy,” Janerka expained. For example, the duck-human likes to be fed bread crumbs.

Once the sensual foreplay is over then you play a character specific ‘action mini game’ to gain more attraction. Noodle Hands Nelson, for one, needs to receive the highest of high fives in order for some of that hand action later. If you accumulate enough attraction points, you will either get “No Chemistry”, “In Love”, or “Stalker Level” with all the flavor text that goes with it, explaining what happens between you too.

Let’s hope Post Apoc Dating Sim is expanded upon and fleshed out in the future, because the premise quacks me up.