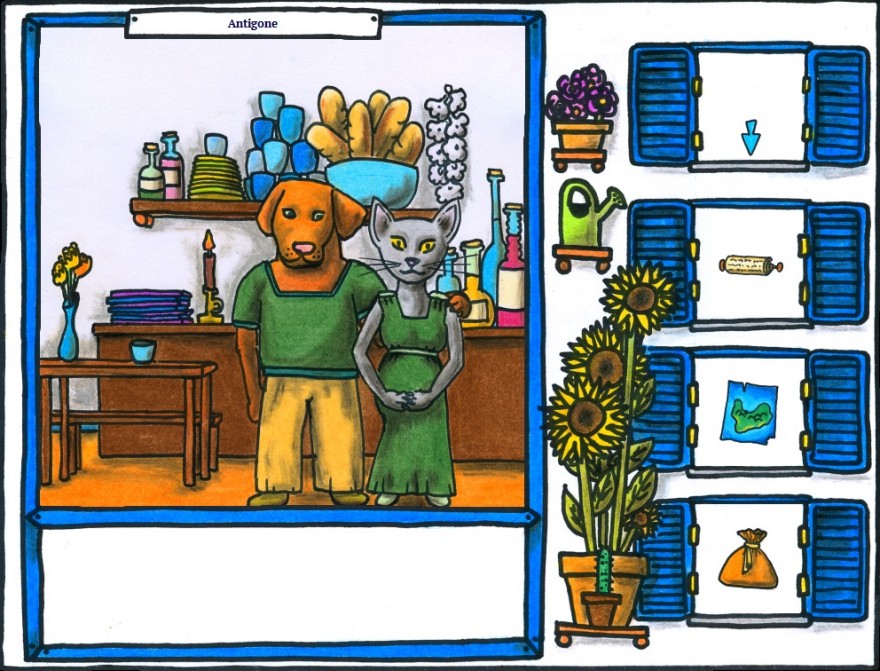 If there were an ongoing debate about how best to weave political discourse into a videogame, I’d have to put a vote in for the way Jonas and Verena Kyratzes have always done it.

Sure, I’ll give credit to those making short, systems-based games such as the prolific and controversial Molleindustria, but for the most part you only see a surface-level heavy-handedness dive into political issues in the medium. What the Kyratzes do, particularly with their Lands of Dream series of adventure games, is bake the politics into a game’s setting, characters, and story.

Importantly, the Kyratzes don’t try to deliver a certain “message” with their games, as that goal only serves to simplify a subject that is among the most complex issues in the world. Rather, politics in their games is interconnected, found everywhere and in everything, but not in an overt manner. In the latest Lands of Dream game, titled A Postcard From Afthonia, you’re told that even a seemingly nondescript bunch of flowers have formed a worker’s revolt.

what the Lands of Dream reflects is the multiplicity of politics

The Kyratzes often take from the work of William Blake, using the tyrannical figure of Lord Urizen in the games, who embodies oppression with an unforgiving austerity. Urizen’s self-obsessed, and notably anti-democratic rise to power, is a constant source of destruction and pain in the Lands of Dream. In A Postcard From Afthonia, which is set directly after the events of The Sea Will Claim Everything, Urizen has declared war against the Fortunate Isles as they revolted against his efforts. And you can bet that any similarities you may draw to recent riots and protests around the world (, ) is no coincidence.

Meanwhile, we get familiar with the colorful inhabitants of these isles (sentient trees, storks, and dead philosophers), getting to know their struggles, worries, and their personal politics. No single “message” stands out here; it’s more of a melting pot of ideas that ring true to this world, some of which may be conflicting.

And so what the Lands of Dream reflects is the multiplicity of politics, focusing on the ideas that different people in their various situations bring to the subject. You’ll probably find some notions that you agree with, and others that you can’t get behind, all of which encourage you towards an inner debate.

And this is focusing solely on the political reading, which is only a slice of the entire game in truth—the Kyratzes don’t make explicitly political games, but games that touch on a variety of topics affecting them at the time. You’ll also find silliness, pop culture, and philosophy mixed in with the politics and other subjects. As you play A Postcard From Afthonia, take a minute to read through the descriptions of mushrooms, trees, and even rocks in each scene. You’ll find a breadth of tones and topics that’ll make you laugh as much other parts of the game make you think.

The strength of this approach to infusing politics into a videogame is that it reflects how most of us interact with politics in our daily lives. We’re not usually confronted with a single message, but form political ideas from a myriad of sources—the news, adverts, internet forums, conversations with friends—and we then reflect our views back into the world around us. It’s a constantly swirling process with too many different sides to count.

This approach that the Kyratzes take with their worlds of imagination allows us to, ourselves, come to a political view, rather than ramming their personal politics down our throats.

You can download A Postcard From Afthonia for free here. You can also pay $3.33 to get the Special Edition version of the game at the same link.