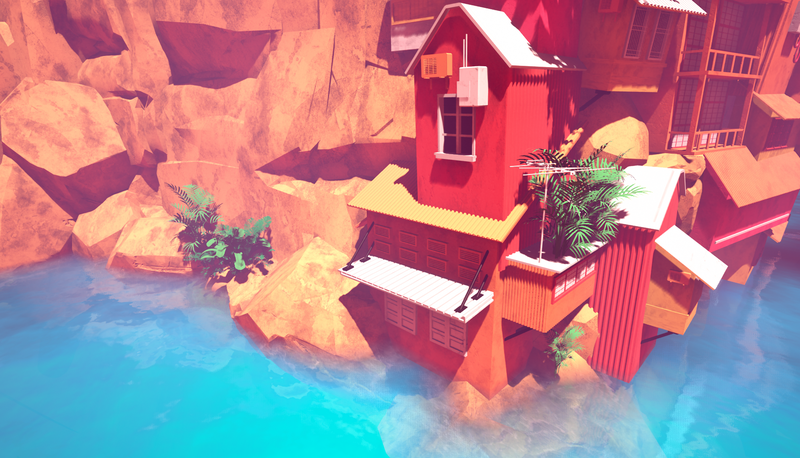 More videogames should be set in the places their creators want to go on vacation. I’m not sure if the person behind Postcard From Capri wants to travel to the Italian island of the game’s namesake but, hell, after having seen the work-in-progress screenshots, I know now that I certainly want to go there.

It’s described as an interactive short story played from the first-person perspective. So far so ordinary. OK, but you play as either a detective or a journalist (to be decided, I guess) who receives a mysterious letter that contains a postcard, a ticket, and enough money to travel to a certain Mediterranean island. There’s some kind of enigmatic plot to solve by searching for clues and speaking to the residents around the island, but that’s all that has been revealed about the narrative so far.

“it symbolizes a typical exotic place to me”

Story aside, the biggest appeal of Postcard From Capri should be the mood its creator is trying to capture. It’s this that is probably jumping out at you (and me) in the screenshots. They have several mood boards (style, city, art deco, characters) that, as one person has insightfully pointed out, show an interest in “dense informal urbanism with a Mediterranean vernacular.” What should also be noted at this point is that the game’s world isn’t supposed to be a virtual recreation of Capri, despite its title (which is subject to change). “I used Capri in the title since it symbolizes a typical exotic place to me, as well as being an inspiration,” explains the creator. Hence you shouldn’t be surprised to see architecture in the game comparative to the electric coastal houses found in the Cuban capital Havana, or the hillside box-stack labyrinthine favelas of Brazil, or even the grand art deco theaters of Paris.

Another of the big influences is the bathhouse in the Japanese animated film Spirited Away (2001). Not so much the traditional Japanese-style design of the building but its use of red, green, and dulled browns around its exterior—this can easily be seen in the color palette dominating Postcard From Capri‘s buildings. The creator adds that they’re also looking at the strange Spirit World creatures seen inside the film’s bathhouse. It can be assumed, then, that the people we’ll meet in Postcard From Capri will somewhat capture the exaggerated, slightly monstrous vibe of the bathhouse workers: bloat-headed manager Chichiyaku, witch-like owner Yubaba, and spidery multi-limbed boiler man Kamaji. Whether that presumption will have any relation to the final result is yet to be revealed.

What has been confirmed is that the island’s residents will speak a gibberish version of Italian. And so, you might say, much like the vague Mediterranean location and slightly misplaced choice of architecture, the language in Postcard From Capri is meant only to evoke the aura of a certain geography and culture, rather than explicitly pinpointing itself. It’s a dream location, a fictional city based in the designs of reality, and one that emphasizes daily living and folksy charm. Even the audio will participate in this, said to be “realistic and ambient with melodies coming from street musicians, open windows, radios”—in other words, a sizzle pot of diegetic sounds.

a sizzle pot of diegetic sounds

The lasting appeal here, at least for me, is that eclecticism. But what’s more instantly praiseworthy is how it’s all held together by that coastal sunset theme. Despite the mix of angular staircases, industrial pipe-laden rockery, and precarious red-slated villas, it’s all united under a single Mediterranean fantasy of palm trees and orange dusk. Without that it’d be a wild kitschy mess but, instead, Postcard From Capri comes across as a believably outlandish island. Better get packing your suitcases.

You can keep up with the development of Postcard From Capri on the TIGSource forums.