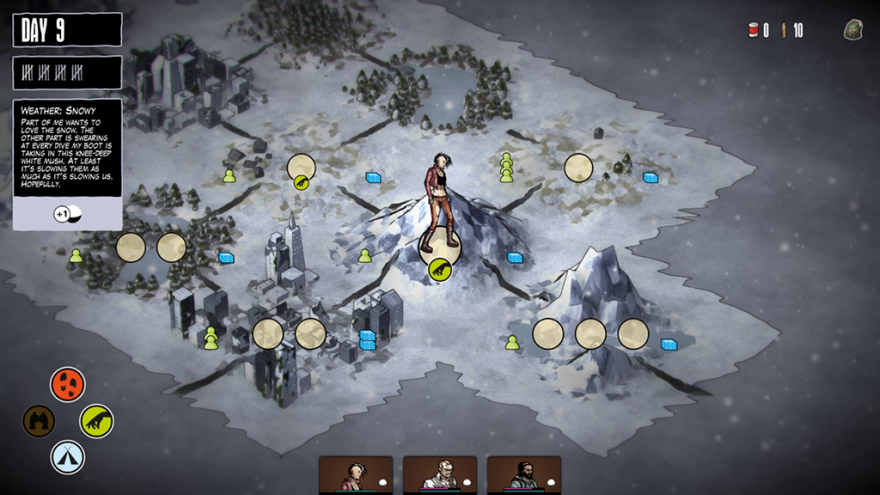 When adapting a game from tabletop to computer, emphasis is often placed on reducing abstraction. Objects, characters, and events only representable by cards, markers, or dice in the physical world can instead be fully realized by digital artists in a videogame. But Gordon Calleja, game designer at Malta-based studio Mighty Box, isn’t sold on this approach. Calleja is currently heading a Kickstarter campaign for Posthuman: Sanctuary, a videogame that expands on the ideas of his board game Posthuman (2015), itself an unusual and technically complex mixture of tactics and narrative storytelling.

“for games we need a radical reconceptualization of those ideas”

“We had this big discussion about dice and tiles, and whether we were going to use the board game metaphor [in the videogame],” Calleja told me recently. “Eventually I decided to embrace that metaphor. So the map tiles from the original game, for instance, remain tiles. You’re not traveling in a preset map, it’s still an abstraction of a ‘journey.’” Calleja said he is more interested in evoking “images in the mind” of the player over presenting everything literally on the screen. By maintaining some elements of tabletop abstraction, players are forced to imbue the game’s iconography with narrative meaning, rather than being force-fed meaning by the game itself.

Posthuman: Sanctuary is set following a mysterious event known as The Fall, in which a large portion of the world’s population has mutated into, well, a post-human species. You play as a human attempting to reach safe harbor at a rumored locale known as The Fortress. Achieving this goal requires braving combat and narrative encounters, as well as managing the loyalty of followers, foraging for and managing supplies of food and ammo, and resisting the ever-present threat of death or mutation.

In addition to his role at Mighty Box, Calleja is a games academic at the University of Malta, currently focusing on issues of narrative. Specifically, he advocates that “narrative in games is a wholly different thing… all the ideas we have of narrative come from, say, film and literature, and for games we need a radical reconceptualization of those ideas.” For Posthuman: Sanctuary, this means a rejection of traditional notions, such as developing a linear, three-act structure, and instead focusing on what Calleja referred to as “emergent storytelling.” Each journey to The Fortress is designed to be unique, informed by the player’s active decisions as well as the intersection of random and non-random events that befall her throughout.

As an example, Calleja said that a player may—through mismanagement, disloyal followers, or pure bad luck—run out of food and begin starving to death. This would trigger one of several encounters that can only be experienced if the player reaches the point of starvation, and how the encounter resolves can influence factors for the rest of the game. Surviving starvation therefore becomes a sort of battle scar on the personal journey of that player, with specific consequences radiating out from it. Calleja envisions players comparing their diverse play experiences with one another, not unlike you might imagine post-apocalyptic survivors trading stories around a campfire.

Calleja also hinted that, even as players are presented with the familiar abstractions of dice rolls and Game Over screens, Posthuman: Sanctuary will challenge them to see past the artifice. While the rules of the game appear to dictate that humans are good and mutants are bad, the emerging narratives may compel players to defy the urge to “win” in the interest of pursuing a more personally meaningful story. According to Calleja, this kind of independence will ultimately pay dividends in unexpected ways. The ideas of mutation and adaptation within Posthuman: Sanctuary might therefore prove to be as complex as the analog-to-digital adaptation process Mighty Box is bringing to the game itself.

Keep track of Posthuman: Sanctuary on its Kickstarter page, or watch an extended gameplay video recently released by Mighty Box.