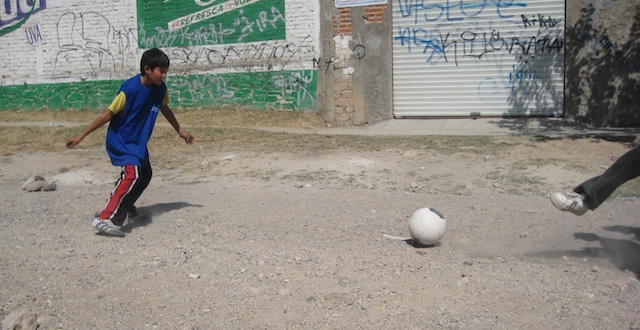 Explaining the idea behind the sOccket brings out a mixture of reactions. People smile and wonder if it’s crazy enough to work, or reflect in awe on why nobody thought of it before. The basic premise—a soccer ball that harnesses the constant motion of play into kinetic energy to ultimately produce electricity—began in a classroom Jessica Matthews and Julia Silverman took their junior year as Harvard undergrads. This DIY engineering project is now the flagship movement for Matthews and Silverman’s company and global initiative for energy advocacy, Uncharted Play.

Like the ball itself, Uncharted Play is in constant motion. Silverman said the future plans for the company are still “top secret,” and when I caught up with Julia earlier this year, they had recently moved into a new office in Manhattan’s financial district humming with the frenetic energy of a startup. Silverman talked with me about the unique challenges of starting a global business inside a hamster ball, making social causes fun, and the reasons everybody loves soccer.

Walk me through the trajectory of the sOccket. How did it become the icon for Uncharted Play?

The sOccket started as a class project when Jess [Jessica Matthews] and I were still at Harvard. It was an engineering class for non-engineers. We came up with this idea, but we felt that this could go further than a class. And so we applied for grants and got funding—not a lot, but enough to keep moving. It came to the point when I graduated—this is May 2010—that we got a design firm. Not an engineering firm, but a design firm, to help us with a modified shake-to-charge flashlight. We put that inside a ball and brought it to the World Cup, and got great exposure.

The great part about working with designers on that was that it was pretty. It was very aesthetically pleasing, much more so than the ones we had made by hand. Everything up to that point was off-the-shelf parts. It’s proof of how far you can just get with the basics, instead of tooling and manufacturing and everything like that. We decided, rather than focus solely on this ball, to make it a broader umbrella organization to focus on this theme—on a movement instead of a product. On a brand.

What were the original inspirations for the sOccket?

The inspiration was the players. And the fans. Because game-wise—and I don’t have the numbers on this; maybe World of Warcraft rivals soccer [laughs]— soccer’s the most played and loved sport in the world. It’s universal, though ironically less so in the U.S. But all around the world, it’s uniting. I mean: World War I, on Christmas Day, the Germans and the English climbed over the foxholes or whatever they’re called and played soccer together.

Combining that with energy was sort of … not a fluke; it just fit. What else fits inside of a ball, or what else could you use a ball for? I mean, in terms of basic infrastructural needs like sanitation, you can’t really put a toilet in it. Water …maybe you could purify water by shaking it up? I don’t know. But then it would be a really heavy ball. So the energy just made sense.

And it was lucky we weren’t engineers, because every engineer we went to said, “No, this isn’t possible.” Because they said it wouldn’t be enough.

Yeah, but that’s the interesting part, because “enough” is a relative amount. It’s not a dozen, it’s not six, it’s what you’re used to. They were used to generating enough energy to power a computer, a water purifier, an aircraft carrier. We’re talking about hours of light—on an LED scale, not even a bulb scale. Which is enough to make a huge impact when the alternative is darkness.

If you go from zero to one, that’s an improvement. If you go from zero to one million, that’s also an improvement, but we’re not looking at that scale. We’re looking at the very, very small packages of energy. And so we actually made our own first prototype. It was our favorite off-the-shelf products and pet toys—it was a hamster ball! We put a shake-to-charge flashlight in it, rolled it around, and lo and behold! It was enough.

When I saw what you had on the table, it could power a lamp or a cell phone—

Our end target is to be able to fully charge a cell phone. But we are still working with pretty small packets of energy. We’ll never be at the level where we’re producing enough energy to power a computer or something like that. That’s not who our user is at this point.

“There are other functions we haven’t spoken to yet—nutrition, HIV/AIDS, gender. These areas remain green fields for the future of play.”

So what does it mean for the sOccket and Uncharted Play that you and Jess are going back to school next year?

The sOccket is very much the flagship movement, product-wise and kind of idea-wise. But we have a lot of other stuff that we’re thinking of playing with—literally. The mantra of Uncharted Play is “fun and function,” that fun can be functional. We also want to take that principle and apply it to not just sports, but also, you know, fashion or whatever—other areas of life that people are passionate about. And play is obviously a really easy way to go. Not necessarily easy in execution, but easy intellectually to take in that direction.

At your launch party last year, one section showcased “the future of Uncharted Play”—there was a pogo stick and a few different balls there…

And a punching bag, yeah. And that was more focused on the energy-harnessing technology, which is great—those are kind of low-hanging fruit because we already have our head in the game for sports, and how we can use sport as a vehicle for both energy creation and energy advocacy.

Function is also a broad term. Obviously, the sOccket addresses energy and poverty. But it also addresses health to some extent: electricity can replace kerosene in some homes, hopefully. And inspired play like this also builds community, encourages teamwork, supports so many outcomes that are less immediately tangible.

These are all just functions of the ball! There are other functions we haven’t spoken to yet—nutrition, HIV/AIDS, gender. These areas remain green fields for the future of play.

How do you plan to distribute the balls in each community to make sure they’re having a lasting impact?

We partner with organizations that are well embedded within the communities where we’re distributing the ball. So, for example, one of our sponsors—State Farm—wanted to work in Guadalajara. So we partnered with Children’s International. They already have community centers, so we’re working with them to have a very community-oriented sharing program with the balls integrated into the curriculum they already have.

That’s the thing—the kids are already playing soccer anyway. It’s just a matter of switching out the ball—making that change and seeing if there’s any added value.

And how many are you hoping to have in each community you deliver them to?

Right now we talk about sOccket teams, which are a group of five kids to a ball. We estimate that for every ball, it impacts 25-plus people. Because you have each kid; each kid is in a family of about five in these communities, where there are extended families. Every ball, you have 25 people. A thousand balls, 25,000. It’s interesting to think about.

In resource-poor areas, the home benefits, not just the child. Mothers, fathers, parents are ecstatic—not just about the light, also for teaching their kids. Light comes from somewhere, you know? You don’t leave the lights on—if they have lights—if you value it, share it, have responsibility, and take care of this thing.

And soccer has a particular presence in the areas of the world you’re targeting? I’m wondering if the decision to focus on soccer entirely also had anything to do with more technical or design considerations—the heft and mechanics of a soccer ball versus another type of ball, or the nature of soccer as a sport.

Completely the universality; especially because our target was always the child in resource-poor areas of the world—even with developed nations, the resource-poor areas. I mean, there are resource-poor areas of New York, unfortunately. That’s always who we were gunning for, and that’s because the girls who were on the team all had personal connections to that developing area environment. I focused on sub-Saharan Africa when I was in school, Jess is first-generation Nigerian-American, one of the other girls was born in India, the other girl had done all her thesis research in Tanzania.

We had these relationships with real people; we knew their love of soccer. When I was abroad, I remember kids wouldn’t look at me because I was the white devil [laughs] until I brought the ball out. It was always a great way to break the ice.

“We’re talking about hours of light—on an LED scale, not even a bulb scale. Which is enough to make a huge impact when the alternative is darkness.”

One of the things that’s fascinating about soccer for sOccket’s purposes is that, as a game, it’s constantly in motion. The players on the field and the ball are always moving; there’s not that same red light/green light of football or baseball, or even basketball to a lesser extent.

Basketball is, I think, in the medium space? Because there is a lot of stop-and-go, but it’s much faster stop-and-go than baseball, where you really are just waiting; or football, where there’s down after down.

But soccer, to me—I mean I’m British, my dad’s British, you know, third-generation Chelsea fan, big premiership follower. So yeah, it will always be the most beautiful to me.

It’s also interesting to look at sOccket from the perspective of game design, since the ball adds this social and environmental value to play. Game designers and academics pose a lot of questions for themselves about how to make new games that incorporate values into the design of the games themselves. Uncharted Play is slightly different in this regard—the sOccket is not changing soccer itself, but it’s adding this whole new element to it.

Yeah, yeah, yeah. And, I think there are ways within the game—I mean, obviously this is changing the ball, this timeless artifact. But there are ways of changing the game to promote those values as well. I think that something that’s become too common is … when all the professional players get brushed and then fall on the ground in agony. It’s like, get up! But, you know, there’s the idea of fair play, talking out when you foul somebody. Being able to say, “I’m sorry,” and helping them up. And not just the lip service, but actually meaning it.

The other thing I thought of when I first saw the sOccket was the PlayPump.

I wonder about the transition when play suddenly becomes work like that, or work becomes play. People criticized the PlayPump because it ended up harvesting labor.

Yeah, exactly. You know, we actually capped the ball at 24 hours of light so there wouldn’t be play slavery.