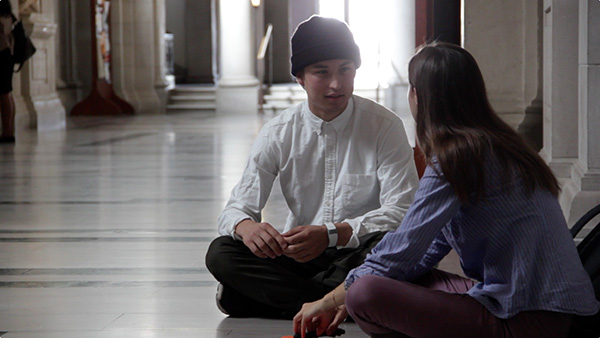 Let’s start by agreeing on one thing: technology is neither wholly evil nor the unequivocal savior of the human race. Whether you fear it or fetishize it, the recent leaps in modern technology tend to inspire dichotomies in the debate about how it all affects us. In fact, in my humbly short years on this earth as an advocate for both old and new mediums, I’ve found it nearly impossible to move past these dichotomies whenever the subject of social media, videogames, virtual reality, or the Internet in general are approached.

The impulse to react divisively is understandable, don’t get me wrong. As creatures of habit, human beings have historically struggled with rational reactions to change. But experiments like the pplkpr (pronounced “people keeper”) app, which aims to analyze and manage users’ relationships, might be our best bet at understanding how day-to-day life can shift around evolving technologies.

By slapping on a trendy-looking heart rate wristband and downloading the software, pplkr will help you track your interactions with people. Through “heart rate variability” determined by the balance between your sympathetic and parasympathetic nervous system, pplkpr picks up whenever you’re having a strong emotional response. It checks in, like a true friend. Or psychologist. How did that person make you feel just now? the app essentially asks.

After gathering enough data and supplementing the rest with searches through your online interactions, the app switches to auto-management mode: composing texts on your behalf, scheduling and inviting people who you vibe with to more hang outs, as well as blocking and deleting the ones who get under your skin.

While the app is a fully functional experiment, it was created by artists “Lauren McCarthy and Kyle McDonald to explore the implications of quantified living for relationships,” the website states. (We covered McCarthy as part of our Emergents series last year.) Predominately, pplkpr hopes to help people ask questions about “who owns the data created between two people, what if it is captured and used? What if algorithms could understand our relationships and make better interpersonal decisions than we can ourselves?”

While pplkpr’s algorithm may not be perfect—a Wired article reported that the app actually deleted two close friends from each other’s contacts due to their stressful encounters in a project together—perfection isn’t really the end goal. The app is “a provocation, a taste of where we may be heading with our quantified living and algorithmic decision making.”

“Who owns the data created between two people, what if it is captured and used?”

Since dating sites like OKCupid and Tinder already utilize algorithms to make relationship decisions for you, evolving into a society that welcomes the services pplkpr offers now isn’t an unlikely situation. McCarthy and McDonald merely hope that “seeing and trying the app will enable people to think critically about this future and speak out about what we do and don’t want to manifest.” In a brief video interview, the duo explains that — as with many of their previous projects — they believe pushing technology further into a personal context can grant us a more profound picture of how they will affect us in the future.

In the interview, McDonald also addresses a common misconception of the app, admitting that “sometimes [pplkpr] starts to look like a reminder of a potentially dystopian future.” Yet, as McCarthy points out, many of the Carnegie Melon students who took part in their first performance test of the app predominately saw its utility as both a tool and thought experiment. One young female student (who, forgive me for being cliché, is most certainly my spirit animal) confessed that pplkpr helped her notice that “people made me angry—that’s the thing that stood out to me the most, I think. Like, oh, maybe I shouldn’t hang out with Mark? Maybe he’s kind of a dick. I dunno.”

While there’s still endless debate to be had over the question of whether or not we benefit or simply should interact with people that  — like Mark — are kind of dicks, pplkpr certainly paints a nuanced perspective. “Don’t just assume that it’s going to be the worst thing ever or don’t assume that you’ll lose some privacy over this that’ll ruin your life somehow,” McDonald urges.

The duo aren’t just a bunch of techno-philes blindly advocating for algorithmically managed relationships. Their focus remains bringing technology closer to home, and seeing what comes up. Though little can ever be assumed about our technological futures, it’s safe to say that the Internet and big data are here to stay. So, before putting up irate statuses about how we can’t believe Facebook has the audacity to sell our information to advertisers, maybe we should take a step back. Maybe we should ask what it means or how it will personally affect us first before jumping to a judgement call.

Or, maybe we just need to download pplkpr and let it determine whether we should break up with Facebook or not.