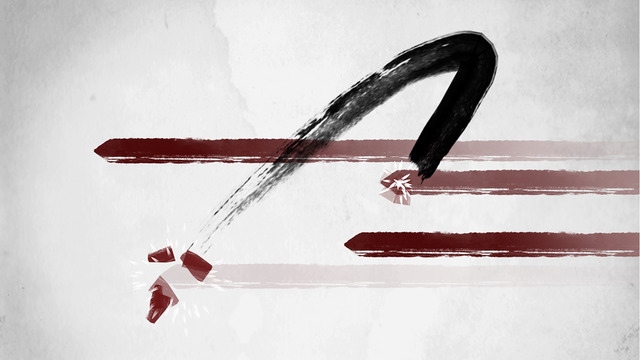 The format of a mobile game is pretty well-honed by now. From Super Hexagon (2012) to Crossy Road (2014), the games we play on our phones are (for the most part) broken up into short-and-sweet attempts to break high scores. When they were new, maybe we imagined spending more time in waiting rooms than we actually do, but now we seem to be able to find a lot of time for these bite-sized bursts of game.

However, a new game from Lee-Kuo Chen and Sunhead Games—creators of A Ride into the Mountains (2013)—called The Swords, doesn’t totally line up with this mobile design paradigm. While it is made up of collections of short puzzles, once you’ve started, you can’t go back or skip one; you progress through them one-by-one, picking up where you left off when you get back to the game. Then it puts fragments of story between each group of puzzles, casting you as a student learning the ways of the blade through a series of metaphor-driven fables. The Swords needs you to be patient both in and outside of its puzzles.

similar to having a coach direct your movement as a fencer

More than just the explicit reference in the framing device, something about playing The Swords reminds me of doing fencing drills. The first set of puzzles revolve around tracing brush strokes representing movement patterns, and they immediately demonstrate that you’re not just expected to pay attention to the shape (as a calligrapher might), but also the timing of these patterns. If you’re impatient or imprecise and with a puzzle, it doesn’t start over the exact same way it did the first time, it rotates and shifts a little to keep you from developing solutions based on reflex. It’s similar to having a coach direct your movement as a fencer—tap this target, this one, this one, at this timing, patience, try again. It’s a game about rote repetition, about feeling out timings, and about progressing—coming back until you get it right.

None of the different kinds of puzzles in The Swords are entirely novel, but the way they build on each other and demand restraint instead of reflex makes the game feel pleasantly different from a lot of the other collections of bite-sized puzzles out there.

You can purchase The Swords on the App Store for $2.99.