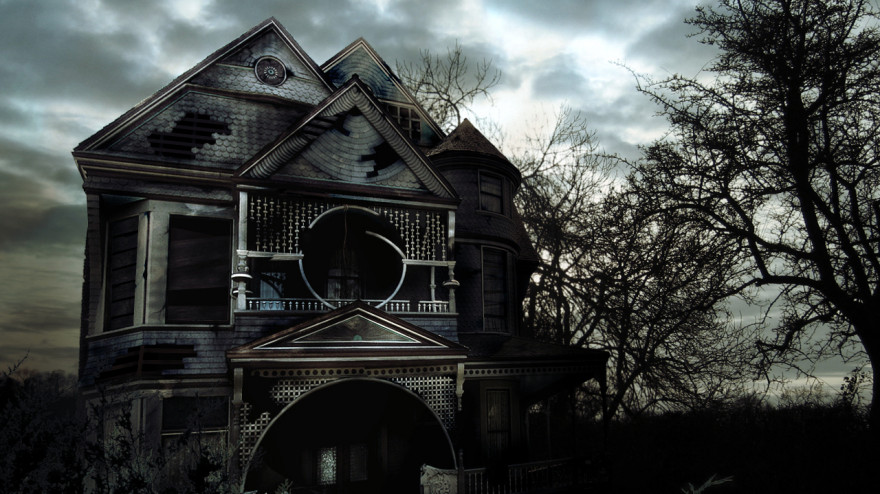 Toronto has two well circulated non-lesbian haunted houses. One is the Gibraltar Point lighthouse, which even Wikipedia denotes as ghost-inhabited. While I’ve heard stories, the most shocking thing I’ve ever seen there was a couple having sex behind it during an overnight music festival. The other is the Keg Mansion, a historical building and classy outlet for the steakhouse chain. Likewise, while there are spook history pamphlets in the lobby, the scariest thing I’ve seen there was my uncle after a few birthday beers.

What I’m trying to say is I’ve never seen a ghost, as far as I know. I even tempted fate by staying in a British hostel in the middle of a swamp, resembling a Scooby-Doo mystery hotspot, adorned with portraits of previous, long dead guests. Nothing. Maybe not having met a spectre face to face is why I not only enjoy the “haunted house” levels of video games but champion them as the king of all stage types.

“Haunted house level” is in-game code for “anything can happen now, in a creepy way.”

“Haunted house level” is in-game code for “anything can happen now, in a creepy way.” Temporary elements. Floating, flipping furniture. Routes and logic become obscured. Secrets scattered behind trick walls. And those are only the reoccurring tropes. It’s a place where the developers’ imaginations run wild. Throughout gaming history, they’ve stood tall as the most interesting bits of design in their respective games. But here: here are the houses that come to haunt other games. 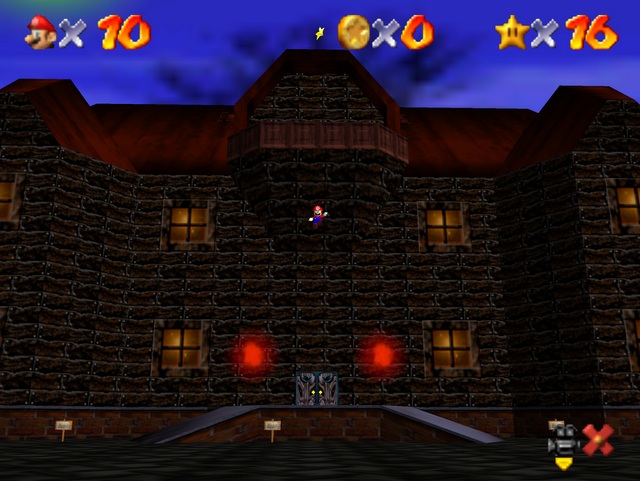 In the spirit of evil spirits, everything about Big Boo’s Haunt is odd, contrasted to the rest of Peach’s vast castle. Instead of accessing it through a painting or liquid-effect wall, you approach a bird cage in an innocuous daylit courtyard. There is Big Boo’s Haunt, a two-storey manor, with hidden attic and basement spaces, far more condensed than the game’s otherwise sprawling landscapes.

There are a lot of things the game has not prepared you for. Enemies, boos and floating eyeballs have exceptionally specific means of defeat that you have to chip at on your own. A twirly subterranean merry-go-round, blasting carnival music and spouts of flame. A room full of coffins, likely Mario’s most direct confrontation with mortality. Books, aggressive and vengeful for all the years the plumber distracted children from them.

But the defining moment is that piano. Seen nowhere else in the game, one room houses a jet black grand piano. Approaching it, the musical monster bounces to life, revealing fangs and a deep red mouth, key sounds clanking, hopping around trying to take off bits of your health. Best of all, it doesn’t serve any purpose to the game. It’s just there to be weird. 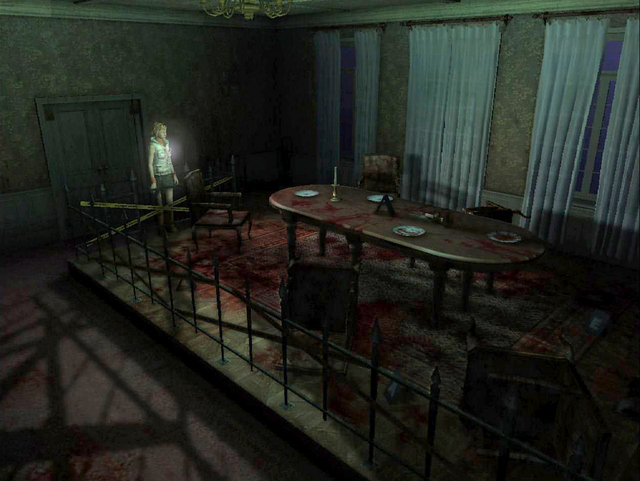 All of Silent Hill is haunted. A town buried in trip-out manifestations of secrets and tragedies. How can one portion be more haunted than another? It works as a microcosm of the entire game cosmos.

The series blurs lines between reality and nightmare, and in the quick dark ride of Borley Haunted Mansion we see all of that compressed. An Edgar Oliver-ian narrator hams you through a chain of chambers, waxing about the ghoulish murders and sins committed therein. Seemingly amusement-park scare fare, it grows difficult to tell if the Borley recording is referencing fictional occurrences or real happenings. Some of Heather Mason’s observations indicate uncertainty as to whether or not the props are phoney. The speaker soon gets less impersonal, more imposing, more threatening.

In one room, a ceiling of stained spikes falls a third towards the floor. “The mechanism is broken you see,” apologizes the hokey host, “it wasn’t supposed to stop there, I assure you.” In higher difficulties, this gag can actually kill you. But then things turn literal in any mode: corridors of trailing, formless red light that will kill you if you can’t outrun them.

Not all haunted stages are necessarily eerie or delirious. Rare’s misty, darkened fifth world of Donkey Country 2 actually sifts between two unique sentiments: somber ease and batshit franticness. You begin in Ghostly Grove, a sunlight-pierced stretch of woods inhabited by porcupines, gut-cackling phantoms, shy-looking ghost ropes and those curmudgeonly trees from The Wizard of Oz. Like so many other stages it’s tough—those vanishing ghost ropes!—but also sobering, with a warm, dusky atmosphere.

Which can’t be said for what comes immediately after.

Goodbye calm, encompassing forest. Farewell moody tunes. Hello a gigantic reptilian, red-eyed pirate skeleton hovering mere inches behind you as a flickering two-digit countdown (first digit usually zero) marks the moment he’ll do something vague but horrible to you. An infamous “mine cart stage” (though the cart is a giant bucktoothed skull), Haunted Hall is Gloomy Gulch’s opportunity to freak out. Between the clock and the humungo jangly bones, your only moment of solace are eye-of-the-storm stops between ranch doors, the only thing seemingly capable of stopping a ghost in its tracks.

Thief is not a survival horror game, but because of one chapter it lingers in many players’ darkest memories. Garrett has been given a very special assignment, to recover an odd and ominous artifact known as The Eye from an area sectored off of the already-gloomy city.

Having mostly weaved around the dubious living, this is the player’s first, startling encounter with the undead. Ghouls, ghosts, living corpses. In the emptied, shattered streets of rubble and overbrush, each wail and shriek from the new enemy types are worse than the last. Each notation of warning making retreat seem more urgent. It’s low-res urban exploration overrun with ghostly ambient sound and decidedly non-ambient ghosts. 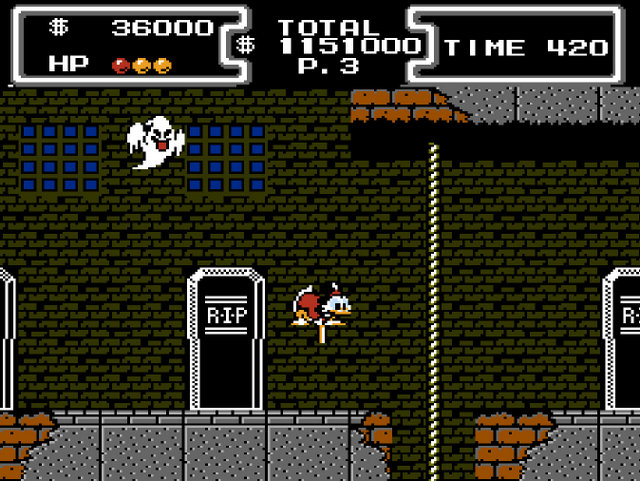 An egg-shaped mirror stands on a hanging ledge atop a suit of armour and Webby Vanderquack. You will see this mirror, that armour, and that pink-bowtied duckling again and again and again. The mirrors act as mysterious teleporters, and they often send you backtracking as a gag, no matter how many enemies and mine cart traps you survived to arrived. One rope, found in the most extended route, earnestly seeming to lead you right, suddenly drops you back here, in that room, just about where you started.

The logic of victory is blindfolded.

At first, with over 300 seconds, that clock seemed forgiving. Now? As you scramble to find the end-boss, Magica De Spell, and the coveted Transylvanian coin, the time limit doesn’t seem as cooperative. This whole level, filled with blind charging skeletons, bound hulking mummies and, of course, sheet ghosts, is playing one loop-around gag.

Much like Super Mario World’s Ghost Houses, the logic of victory is blindfolded. You’re left to deal with the haunted stage’s prankster spirit, Scrooge unceremoniously dumped at the starting line, Webby likely suffering profound deja vu. The actual exit is behind a fake wall, an incredibly innocuous one. In this hidden chamber are still two more identical mirrors. One will lead you to De Spell, the coin, the end. The other flings you back to another spot on the same floor. Not far enough to encourage giving up, but just far enough for the spooks of the house to rub it in a little. This is, after all, what they do.