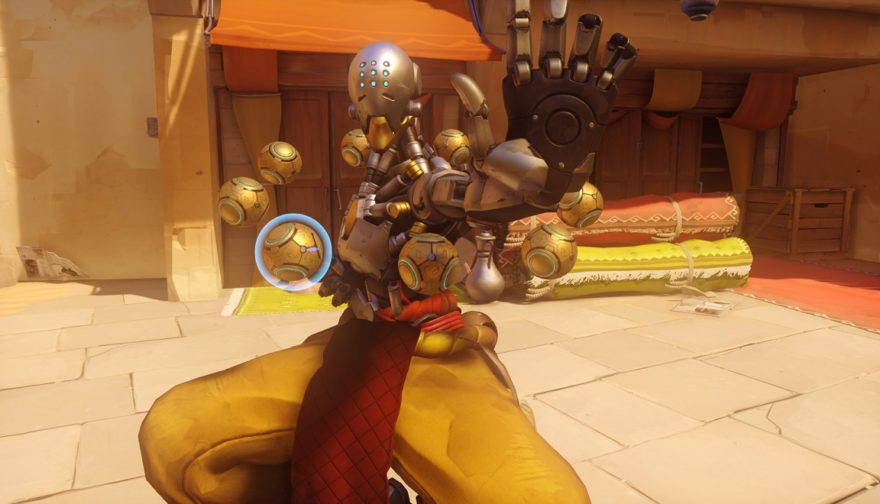 For real, the Overwatch stable of dudes is stocked with tryhards and fuccbois—whether they’re chomping on cigars like a pre-senile Clint Eastwood, or floating across the stage wishing they were at a Type O Negative concert.

Comparatively, the two playable Omnic characters are the most effortlessly rad of the group, even though we are constantly reminded in backgrounds and vocal quips that the Omnics were bad news, not to be trusted.

the embodiment of “be cool”

Though I have much respect for Bastion’s bird fondness, my man/bot Zenyatta is the stylish and super-chill Sakamoto of this game. He is the embodiment of “be cool,” never getting flustered while hovering around with nimble poise and deceptive lethargy.

Zenyatta lives in the danger zone—he’s on fire the second he wakes up, zapping discord orbs to increase damage in the streets and zipping healing harmony orbs in the sheets. Zenyatta shreds tanks to ribbons, can waltz with grace no matter the partner, and passes out puns and koans like full-sized candy bars on Halloween.

But Zenyatta is blindingly effervescent when bringing out the best of his team, handing out kills with a distant nod and playing medic from the shadows. But that doesn’t mean he can’t take center stage when necessary, because when this titanium monk invites you to gaze into the iris, things are gonna get transcendent.

Ana – Ana is the protective mother we all want
Lucio – Inside the idiot party-bubble of Lucio
Mercy – Mercy is the most terrifying character in Overwatch
Symmetra – Go ahead, sleep on Symmetra