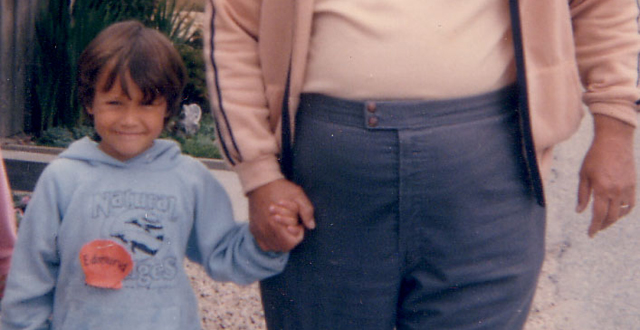 This is part of our ongoing series on the early lives of videogame designers.

The new independent games movement is still too young to have archetypes, but Edmund McMillen and Tommy Refenes probably come the closest to embodying that spirit. Their love letter to their favorite game designers past and present, Super Meat Boy, developed originally as a browser game before becoming a hit for the Xbox 360 and PC. We emailed with McMillen and Refenes about drawing boobs underneath their childhood posters, a grandparent named Honey, building their own house, and a lot of Teenage Mutant Ninja Turtles.

Edmund: My mom was a teacher’s aid, my dad worked in a factory, i think.. he might have been a handyman im not sure.

Tommy: My mom and dad ran a cabinet shop.

Edmund: I lived in 10+ different houses growing up, i have no memory of any of their colors. My grandmas house was light blue with white trim though, my grandpa painted it. i remember it because those were the colors of all his clothes as well.

Tommy: My parents built their house the year I was born. It’s a brown cedar house that is awesome.

Edmund: My 1st best friend was Andrew Alverez, when we were 10 we decided to go out on a hike in the woods and shoot out all the windows of this random persons house, after that i wasn’t allowed to hang out with him anymore.

Tommy: My 1st friend was a kid named Ross Martello. He moved away before I started 1st grade.

Edmund: My Grandpas death when i was 9.

Tommy: I had pet turtle named Zack that died when I was out installing cabinets with my dad.

Edmund: I spent most of my time playing with Ninja Turtles in my backyard, i would line them up like a videogame and then fight through the armies with my favorite action figure (wolverine in weapon X form). I also played a lot of videogames and drew.

Tommy: I also played Ninja Turtles and pretended I was either Wolverine, Cyclops, or Beast as I ran around the woods near my parents house. I used to dig holes and try to make tunnel forts. I used to draw as well but gave up my drawing skills for math and programming skills. I also played videogames to an obsessive degree.

Edmund: Losing my mind, and loved ones.

Tommy: Losing my mind, and loved ones, and that the sun might blow up.

Edmund: Black T-shirt, black shorts/pants and boots.. those are actually all the clothes i own. my closet is just a row of black tshirts with random nerdy/band images on the front of them.

Edmund: i admired my grandparents a lot, my grandpa was a very smart guy who always seemed to have an infinite knowledge about dinosaurs. i found out when i was older that he would look up facts about them just for me and wasn’t really that into them 🙂

Tommy: Jesus (he works at the Capatola mall at the Sbarros)

Edmund: i wanted nothing more than to be a Ninja Turtle.

Edmund: i used to read calvin and hobbies with my grandma a lot growing up, those books were probably my favorites. i also got this popup book called the dwindling party by edward gorey when i was about 7, it was just amazing.. i believe that book influenced me a lot more than i realize.

Tommy: I never really read, but the one time I did I read “A Wrinkle in Time.” It was awesome.

Edmund: i honestly never was a reader, when i was little i used to ask to be excused to go to the bathroom when it was time to read out loud. i had a lot of issues with reading when i was young because i was dyslexic so it turned me off to a lot of books then.

Tommy: In my senior year of High School I was required to read “Man’s Search for Meaning” and I really liked it. It’s a two part book, the first part is the authors story of how he survived a concentration camp, the second part is about how through suffering he found meaning in his life and how people have to endure hardships to appreciate what they have. For some reason I really liked it.

First award that you won?

Edmund: when i was 9 i won 5th place in the “art and cookie festival” for a drawing i did of wolverine.

Tommy: I placed in some beauty pageant. No joke.

Edmund: i have no idea what this is.. and now i feel dumb.

Tommy: They wanted me to be happy.

Edmund: My grandma, all of my fondest memories revolve around visiting and living with my grandparents but my grandma really went above and beyond to really support anything i wanted to do, if she wasn’t around i doubt i would have even tried to do art for a living.

Tommy: I’m not really too close with any of my extended family…so I don’t really have a favorite.

Edmund: Grandma, Gramdpa.. my family was boring when it came to nicknames.

Tommy: My great grandparents were Honey and Grandaddy. Papaw on my mom’s side, and Grandma and Grandpa for the rest.

Where did you grow up?

Edmund: Cootie! i mostly liked putting the bug together.

Edmund: i had a love hate relationship with monopoly, everyone i played with tended to cheat or lose interest.

Tommy: I didn’t like playing “pull the switch” with my uncle randolph

Edmund: When i was 8 me and this neighbor hood boy touched each others junk behind his house, for some reason after that i thought i had aids. i didn’t know what aids was but i must have thought it came from doing anything remotely gay at the time.

Tommy: I used to write cuss words and draw boobs under the posters in my room.

Biggest trouble you ever got in?

Edmund: i got in a shit load of trouble for shooting out those windows with Andrew, i thought i was going to jail for life. in the end nothing much came of it, but the guilt was horrible.

Tommy: I threw a nickel through a window at school playing around with a friend. I had to pay for the window and had to clean the dance room for weeks.

Favorite character in a book?

Edmund: i did a lot of daring things when i was little, one that always comes to mind was when i pissed all over the cubbies in kindergarten when the teacher wouldn’t let me go to the bathroom. i also threw a block at a teacher face when she told me not to, most of my daring moments revolve around teachers for some reason.

Tommy: I was tame.

Tommy: Ed’s wife calls me a Fat Queer all the time

Edmund: i used to day dream about fighting crime! usually with guns. i made the mistake of telling a friend this once and it got around the school that i “wanted to kill people with guns” this was way before columbine so i was safe.

i read a lot of Punlisher comics.

Tommy: Time Travel, I used to have so many dreams about time travel. I even formed a club in 4th grade to try to make a time machine.

What did you draw as a kid?

What pets did you have?

Edmund: I mostly had cats growing up, i had one named Stimpy for many years. i also had a lot of lizards that my mom seemed to always name.

Tommy: We had cats and Dogs. I had turtles, frogs, fish, snails, crabs (heh). All kinds.

What superheroes? Did you ever try to fly?

Edmund: Wolverine, Punisher and ninja turtles.. i never tried to fly but i used to try to move things and change stop lights in the car.

Tommy: Most of the X-Men. Yes, I did try to fly. Once, for christmas I asked Santa for Wings so I could fly, but I made it a point to clarify on the list that I didn’t mean “Wings” the shitty videogame that was out on Nintendo at the time, but actual wings so I could fly.

Edmund: my dad had this handheld football game when my parents were still together, I used to play the hell out of it but dont think i ever knew what i was doing.

Tommy: My parents had a Fairchild, which was a Sears version of the Atari. It had a baseball game, a Tank game, and a pong game. I played it quite a bit.