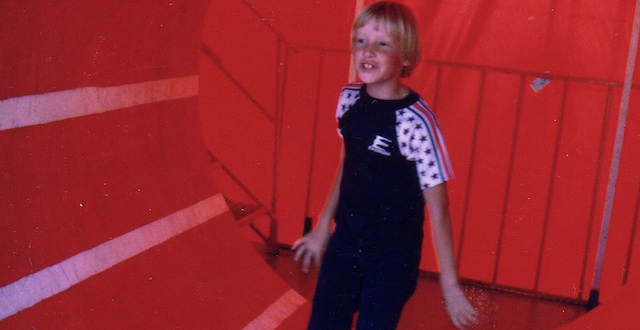 Randy Smith, known for his work on the Thief series and the award-winning Spider: The Secret of Bryce Manor, has gone from backyard adventurer to acclaimed videogame designer, Edge columnist, and David Kalina’s partner in crime at Tiger Style Games. We talked to Smith about making epic heroes out of his action figures, discovering ruins in the deep woods of Vermont, and the pen-and-paper role-playing games that were his informal videogame design training.

I was born in upstate New York but grew up just across the border in Vermont, a place with vivid seasons and hospitable natural beauty. My early childhood happened before cell phones, the internet, or home computers.  Later, when I started to play videogames, I was really drawn into experiences like Ultima and Zelda in part because I connected with the fantasies of rambling countrysides and very immediate, tangible lifestyles. These themes have always been present in my work as a designer.

My mom taught elementary school and directed community theater.  My dad had jobs ranging from farmer, to high school teacher, to non-profit director; but he was an early adopter of technology, so most of his work had something to do with computers.  Even back in the ’80s, we always had PCs around the house.

What was your favorite book?

I was an extremely avid reader as a kid, but there are a few favorites that spring to mind. John Bellairs’ The House with a Clock in Its Walls, whose influence of creepy old mansions with hidden mysteries can be seen in Spider: The Secret of Bryce Manor. Tolkien’s The Hobbit, which made magic and adventure believable but no less fantastic. When I was in fourth grade, I was really into this one book about a kid who gets trapped in an alternate universe where dinosaurs didn’t go extinct and instead evolved into sentient people. Meanwhile the dinosaur version of him was back in the human world also having misadventures. I really loved its treatment of the importance of multiple perspectives, a subject that every videogame designer must understand thoroughly. I haven’t been able to track this book down, though. So if anybody knows what it is, please tell me!

What was your favorite toy?

I was really big on action figures. I would tell elaborate stories with them, mostly adventures and epic battles set on the staircases and furniture of the house, which to the action figures were of course the size of alien skyscrapers and villain fortresses.

We moved around a lot until I was in high school, so I was in the habit of making new friends from scratch every year or two. My three siblings were among my best friends and most active playmates growing up. The earliest friend that I still know today was a kid named Joel. Joel attended one of the hippie alternative schools in Vermont, but his sister rode my bus and thought we should meet. They lived in a rustic cabin in the woods while Joel’s stepdad was building their beautiful A-frame house next door. Joel introduced me to pen-and-paper role playing games, which became a big part of my childhood and informal training to be a videogame designer.

“I was really drawn into experiences like Ultima and Zelda in part because I connected with the fantasies of rambling countrysides and very immediate, tangible lifestyles.”

Where were some of your favorite hideouts?

I was given pretty free rein to explore. In fact, our parents forced us to play outside for hours at a time, only letting us back in for meals. Vermont has a storied history of settlement and abandonment, so deep in the woods you often discover the foundations of old mills near a creek, or a dilapidated hunting lodge, or the ubiquitous rock walls that crisscross the countryside, left over from Vermont’s sheep-herding heyday. For all I know, these were actually just a quarter-mile past my backyard, but I felt like a big-time adventurer when I would discover them.

I don’t remember thinking very seriously about career until high school was nearly over. In grade school I was into chemistry experiments, creative writing—just kind of whatever. I had a natural aptitude for computers, and all the adults in my life told me that would be a lucrative vocation to get into, so I wound up getting my degree in computer science. But in a way I think I dodged a bullet. The standard career path of salaries—nine to five, and 20 years at the same company—never called to me, and I’ve never had to do it. Especially now as an indie-game developer, work feels like something I want to do with my time, not a huge, ponderous structure that has been imposed on it.

What were some of your childhood daydreams/fantasies?

Like most kids I spent a lot of time playing, and I tended to reinvent everything with my imagination. Just the usual stuff, I think. I would pretend that jumping across a creek or sliding down a snowy hill was part of some high-stakes Indiana Jones adventure. I was really into those fiction books that pretended to be real encyclopedias. You know, the ones about gnomes with red hats, or colonies on the moon, or elaborate recipes for witch spells.

I remember playing Pong on a friend’s home system as a tiny kid. When I was in third grade, we got a Commodore VIC-20 with a bunch of cartridge games. That was the computer on which I first learned to program. I spent time with all the primordial game systems: Atari, Intellivision, arcade games, early Tandy and Apple computers, all the way up to the Nintendo and PC gaming revivals of the late ’80s. I remember getting really deep into games that included both the classics, like Rogue and Defender, and random titles that no one ever heard of and I can barely remember, often because they were easier to deconstruct and analyze for game design. I made my own crappy little games from third grade through high school. Designing my own game systems seemed as natural a place to create as writing or drawing.

Did you have any big childhood secrets?

Not that I can remember. I probably had them for about 12 minutes at a time until I tried to provoke someone into figuring them out.

Mostly the dark. I had trouble going to sleep because it was so easy to interpret every shadow and noise as something really scary. I was mostly worried about the intangible and unknowable, especially ghosts, as opposed to corporeal terrors like wolves and zombies, which is still true today.

I was fortunate to be surrounded by awesome role models and fun, cool people, especially my family and the teachers at the rural schools I attended. I was always part of rich communities full of interesting characters. My grandfather owned three businesses, traveled by ship around the world, hunted for wolves in the Northwest Territories, hosted enormous Easter egg hunts for the kids of his town, and used to yell at cops for driving too fast through the neighborhood without an important reason. So he stands out.