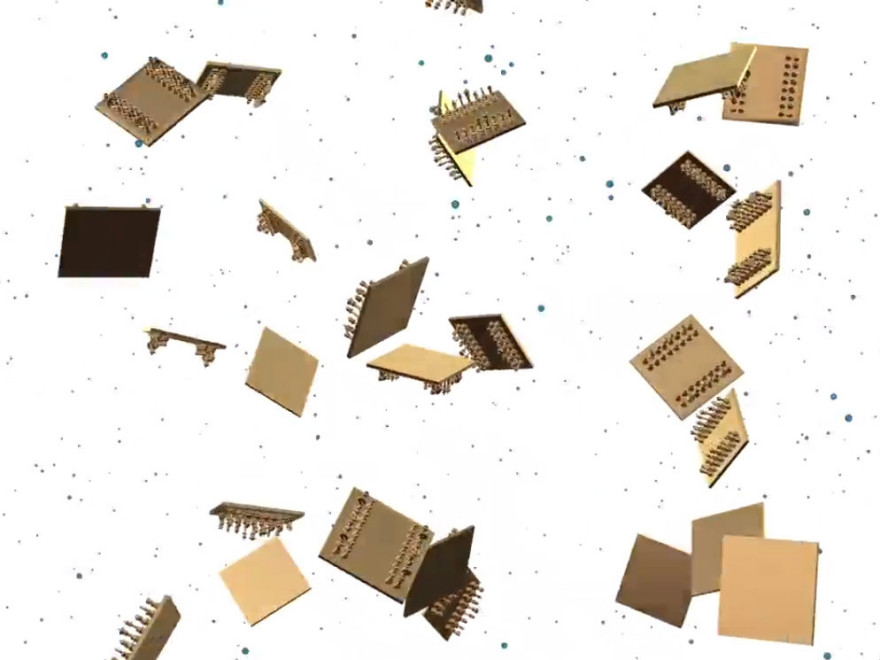 David Kanaga is a videogame audio dynamo. Few people are creating soundscapes more in-tune to the possibilities and aesthetics of videogames, something he’s spoken (and written) about at length.

His work for Dyad, in particular, was part of a new breed of experience. It was, sure, a game, but it’s more memorable as a trance-netting audio-visual melt. You race down a funnel of hypercolour and texture to whirling sounds. The slow-burn, hypnotic climax, Eye of the Duck, is a level that will go down in gaming history. A game of sight and sound, though not in the Rod Serling way—it’s the David Kanaga way. (It shouldn’t surprise you he went on to co-develop Proteus.)

Oddly enough, artist Andrew Strasser, who designed the video you see below, has never played it. Instead, he took his own route for Space Ox & Peking Duck, two tracks off Dyad’s soundtrack being released by Daniel Lopatin’s Software Recording Co. The result loops back to familiar places, with traces of classic games flitting alongside dazzling, Dyad-esque imagery.

We spoke with Strasser about music, Christmastime and Super Mario Bros. 3.

How did you come about to make this video?

I did a video for this guy Co La before, from Software, and then Software sent me this music by David (Kanaga) and I really liked this track in particular, so I decided to do a piece for it.

So you encountered the music before what it was a score to?

Yeah, I didn’t know that it was related to a game. I looked it up, I checked it out, but I have not played the game yet.

So what were your reference points with this video?

The audio, to me, really reminded me of music I liked from my past. Stuff like Mike Paradinas, old stuff from μ-Ziq, and these kinds of melodies remind me of Christmas, holiday time. I wanted to use some of those references to marry the sound to an image. I used snow, puzzles, chess, things that are recreational. Not Santa Claus stuff, not directly related. Just things that have the same kind of wintery feeling to them.

Why go about recreating regular, recreational objects in an infinite, virtual space?

As much as we think we’re humans and we’re really smart, we’re just animals with large brains. The way that cats will get distracted by catnip, we get distracted by things that resemble what we understand. The way that we play games, it’s like, I know that as a kid I would play Mario 3, beat it, and not even look at them. They would get offended by that. It’s because of our oversized human brain, I was getting distracted by the fact that I take in information through my eyes and my ears, it put me in a state of suspended disbelief that I’m looking at something that actually means something, but it’s just a bunch of shapes organized by someone else.

Even though you didn’t play the game, there still exists a game motif throughout, the puzzle, the chess.

Exactly. When I take on a client I try to not stray from their message, or whatever they have to offer, but I do have to bring something to the table.

Do you think it’s better that you didn’t play the game?

I think it’s better because I’m not consumed by the brand that David and Dyad already had. If I were heavily into the culture that was already developed by these artists, it wouldn’t be as much as a hybrid. The game stuff that I reference, I do enjoy the warmth of older games like puzzles and chess. I would much rather play a videogame, but those old games, there’s a warmth there that I wanted to address.

You prefer videogames? What kind do you play?

I’m a big Link to the Past fan, I’m really dying to play the new Zelda game. I don’t really like 3D games. I don’t connect emotionally to them. I feel like I prefer playing Mario 3, or Yoshi’s Island or Mega Man. I like 3D animation more than 3D games.

Why do you think that is?

It’s just that’s what I grew up with. When I saw my first videogame, it was E.T. on Atari. I remember having my mind blown when I saw an 8-bit game system, I didn’t know how you could have more. Then Super Nintendo came out, doubles it. It’s kind of the difference in aesthetics between Atari and Nintendo, that jump. It was such a big stretch. I don’t think that can be replaced by the gradual stuff we have now. I really liked Star Fox. That felt like a really cool 3D game. The fact that you start so low, E.T. was so shitty, that you can eventually get to Star Fox, the difference between one 3D game and another, to me, doesn’t feel as big. For me it’s more exciting to have my mind blown.