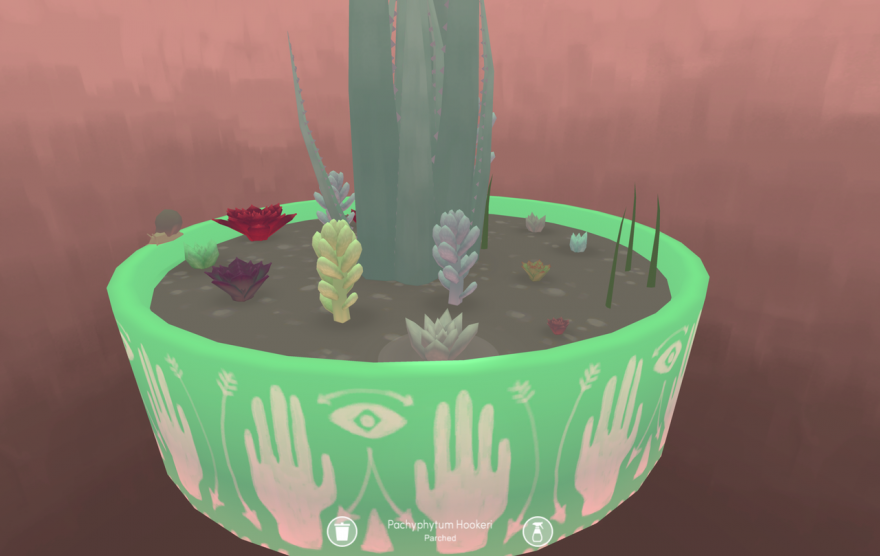 My mum used to flick the bag of slug pellets upwards so that they rained upon my brother’s grave with great spread. Each flick of the wrist sent hard blue balls of chemical into the air and I’d watch them descend over the soil. Some caught in the petals of the carnations. This taught me that slugs were pests when precious plants were around. Their greed had to be fooled to cause their death.

But that is not the case in Viridi. There is no space for this friction. Instead, the sight of a snail slowly circling my plant pot is invitation to zoom in and sing with it. “Wow cute,” reads the status description of the snail. I spray it with some water and it changes to “Wet.” The snail does not care. It continues to sing its enchanting lullaby to me.

Ice Water Games has announced that Viridi will be out on August 20th for Windows and Mac on Steam. They’ve passed me a copy and I’ve let it slip into my life as that’s all you can do. It’s not something that you play by always being actively engaged in. As with Mountain, it’s intended to be a secondary experience, something to check up on every now and then in a separate open tab while you work, or whatever. And it lends itself to that beautifully.

You pick a plant pot (black, patterned with eyes, obviously) and then select one of three groups of starting plants. You can give everything a custom name, too, including each and every one of your plants. This naming process isn’t forced upon you but there’s something about the tenderness and routine care that Viridi requires that imbues a sense of ownership.

something maternal that awakens inside me

All you do is visit your potted plants every now and then to water them, sing to them, just observe them as they steadily stretch their forms to become bigger. There’s no pressure to come back frequently as not much would have changed and they won’t die as quickly as real plants would if abandoned (though they will deteriorate after a while). Even so, every time I return there’s something maternal that awakens inside me, as if I’m hovering over a crib and checking up on my babies. If you water them they go from “Parched” to “Sated,” and if you sing to them for long enough they’ll be “Vibrant,” so there is some subtle interaction here—you can affect the flower’s mood, as it were, by giving them attention.

When we first heard about Viridi back in May, one of the features that was still being worked on was how you acquire new plants inside the game. In the build I’ve playing, you are given a free one, once per week, while the whole range can be bought for a few cents. Viridi will be free once it arrives so the only money you’ll be spending on it will amount to hardly more than a dollar if you were to buy the entire selection of plants on offer.

Ice Water Games told us that the idea was to not have the plants available as “unlockable goals” as that would put focus upon this pursuit rather than tending for the plants. This system does seem to meet that aim. Especially as what you’re actually doing is buying a specific plant seed for your pot, and not an unlimited supply of that plant. If you don’t look after that seed then it will eventually become unhappy and wilt, wasting that money you spent. So, as with actual plants, you need to invest time into them to justify the money spent.

Further, Ice Water Games has another feature to reveal with the announcement of Viridi‘s release date. “Viridi is going to be one of the first games to integrate with the Steam Inventory, previously reserved for items close to Valve, like Steam Trading Cards,” the studio said. “Seedlings and backgrounds in Viridi will be tradeable between Steam users. We’re a little too nervous to open up free market interactions for launch, but we may consider it in the future.”

The plan, then, is to build an economy around trading these seeds. I haven’t had Viridi long enough to know if you unlock more seeds the longer you can maintain your plants, or if when they flower they drop seeds for you. But if that did happen it would certainly encourage people to play Viridi as Ice Water intend while also coaxing them to participate with the rest of its virtual gardening community.

You can find out more about Viridi on its website. It will be out for Windows and Mac on August 20th. It’s also heading to mobile.