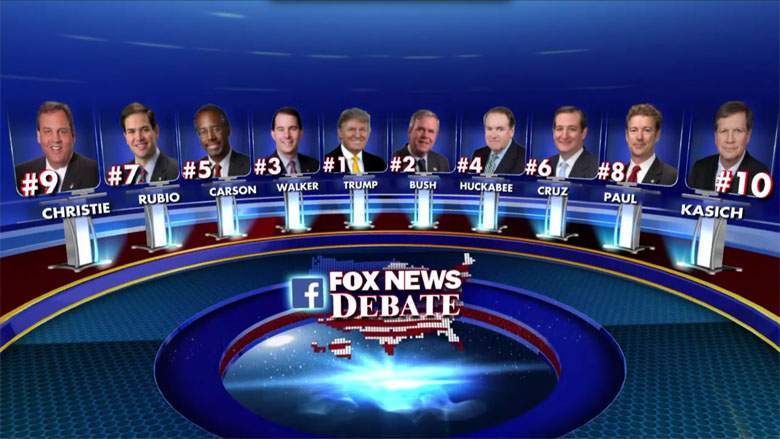 Presidential elections, we are told, are not games. The future of America is at stake. More portentously, some commentators like to claim that the future of the free world is at stake. But even if we go with the de minimis definition of the stakes, America’s future usually seems a fair bit more serious than Rocket League. Then, in a fit of desperation, a presidential candidate releases a video in which he cooks bacon on a machine gun, and suddenly the comparison with games feels unfair to Rocket League.

The American presidential election season has a game design problem. This is game design 101, really: The rules and constraints that contenders must navigate encourage and reward behaviors that are broadly undesirable.

This problem became even more apparent than usual in the run-up to tonight’s first Republican primary debate. Fox News, in an effort to mitigate chaos and minimize embarrassment, decreed that the top-ten candidates according to an average of polls would appear in the primetime debate. Candidates below that cut-off point would be relegated to an earlier debate, widely and derisively described as the “kids table.”

Getting rid of the chaff sooner rather than later is a defensible choice.

For adults seeking to occupy the highest office in the land, the “kids table” is not a desirable place to be. That’s why Politico’s Dylan Byers declared “The importance of qualifying for the debate, which takes place Aug. 6 in Cleveland has upended the usual pace of the primary campaign.” The candidates vying for the last few debate spots, Byers reported, had gone on media blitzes in an attempt to secure their participation in the main event. Player strategy, in Republican primaries as in Monopoly, responds to the rules.

Clearing the first hurdle is important in most games, both figuratively and literally. In the actual sport of hurdling, the placement of the first hurdle is considered paramount; it sets the three-steps-and-jump pattern that the event follows. Moving the first hurdle, as Fox News and the RNC are learning, changes the entire event. This effect is also accepted as more abstract game design idea. In their book Patterns in Game Design, Staffan Bjork and Jussi Holopainen note that “early elimination” is a feature of gameplay in games such as Monopoly, Magic: The Gathering, and Counter-Strike. “Early Elimination is usually considered to be an unwanted feature in multiplayer games with long play time,” the pair write, “especially in the case of face to face board or card games, as the eliminated player remains outside the play for the rest of the game instance.”

Precipitating the elimination of lesser players and their resulting long spell on the sideline is nevertheless a valid game design goal. Indeed, Bjork and Holopainen concede “Early Elimination, is, in one sense, just a more drastic version of Player Elimination,” and player elimination has to happen at some point. Getting rid of the chaff sooner rather than later is a defensible choice.

The real problem arises when the consequences of defensible choices receive insufficient consideration. Many designs work in theory only to break under competitive stress. The bracket for the 2012 Olympic badminton competition, for instance, fell apart after an early upset prompted teams to lose on purpose in order to advance to the easier half of a suddenly imbalanced bracket. Eight players were ultimately kicked out for losing on purpose. Although the introduction of an earlier hurdle in the Republican campaign has not created an incentive to lose on purpose—quite the opposite, in fact—it has had a similarly destabilizing effect. It has forced campaigns to broaden their efforts at an early stage. As one source told Politico’s Byers:

“No one has ever paid this much attention to the national polls this early on. … We’ve been very aggressive engaging with voters on the ground, but so many people [are] paying attention to the polls now.”

There is a stigma attached to discussing political campaigns as games. “Horse race journalism,” the practice of discussing little other than the relative positioning of candidates in polls and the fevered minds of party apparatchiks, is frequently criticized as a framework in which elections can be discussed with virtually no reference to substantive policy differences. Focussing on the hypercompetitive nature of campaigns to the exclusion of all else is, at least in the eyes of some beholders, quite the turnoff.

Why, then, would it be any better to discuss the shape of the track on which the horses now race? For starters, it’s important to know whether the presidential horses are sprinting through the Preakness Stakes being made to try steeplechase. Moreover, whereas horse race journalism encourages a certain devotion to underlying structures, examining politics through the lens of game design encourages us to call those structures and the decisions they embody into question. American presidential campaigns have game design problems, and thinking of their problems in such terms might well help us slowly address these pathologies.