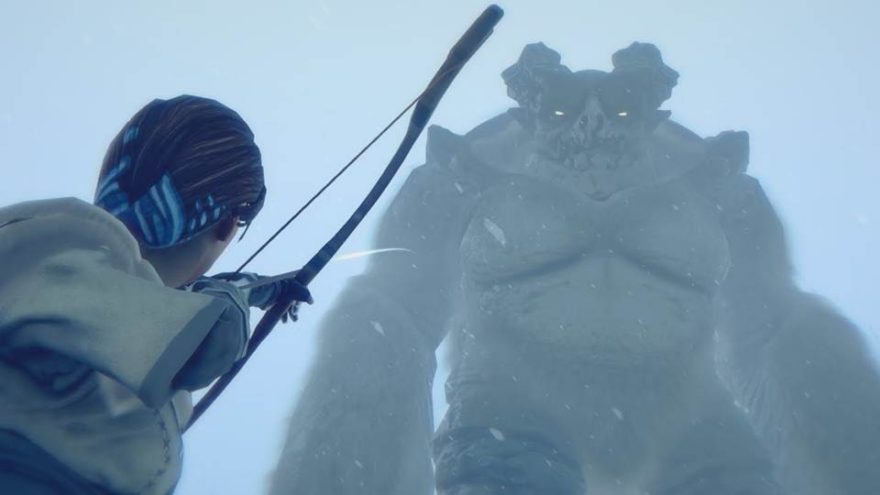 No Matter, a small team of three, began working on Prey for the Gods in 2014 for two reasons: to work on their own thing, and to make games similar to the ones that drove them in this direction in the first place.

It’s clear which games inspired the team, or at least, which single game had the biggest impact on them. Upon first looking at Prey for the Gods, the first thing anyone familiar with it is sure to think of is Team ICO’s Shadow of the Colossus (2005). That’s not an accident by any means; in fact, the studio itself cites Shadow of the Colossus as being one of the games it’s pulling ideas from, as well as others like Deus Ex, DayZ (2013), and Bloodborne (2015). That may sound like a mixed bag, but No Matter is confident that the elements they take from these games complement each other in surprisingly effortless ways.

Brian Parnell, No Matter’s director, compares it to the first time he tried prosciutto and melon. “I thought it was gross the first time I heard of it… who would think of such a thing!? Then I ate it and it [all made sense to me]. The balance of sweet and salt really opened my eyes. That may be a terrible analogy but for me it makes perfect sense.”


So what’s the result? In Prey for the Gods, players will control a lone, voiceless woman, from a third-person perspective, and traverse an island covered in snow. They’ll need to explore this unkind world in order to find food, weapons, and other resources, before tracking down one of the five giants that also inhabit the area. Exploration is greatly encouraged, but spending too long out in the cold without a plan could be the end of their adventure—and thanks to the game’s dynamic weather, they may sometimes be caught unprepared.

how defenseless they are while climbing

On the Kickstarter page for Prey for the Gods, No Matter explains the basic actions players will use throughout their time with the game: attack, move, dodge, and climb. Simple enough to pick up on, but learning specific things like how the character moves, how fast they move through deep snow, or how defenseless they are while climbing, will be the key to survival and victory. No specific directions of explanations will be given—players will have to ask and answer their own questions while exploring, and deal with whatever situation they are greeted with. “For us, the goal has always been about fighting the giants, and figuring out what is going on in the world,” said Parnell.

So far, the crowdfunding call has been going fairly well—the $300,000 goal is less than $50k away at the time of writing—it helped along by people being interested in the game’s obvious resemblance to Shadow of the Colossus. But Kickstarter has grown a reputation for attracting projects that end up going nowhere; money is wasted or the game at the other end is compromised and disappointing. Parnell is hoping to encourage a little more faith in people with Prey for the Gods.

“It saddens me when [people group all Kickstarter projects together]. When you look at what we’ve shown vs. [these other games], I think it’s a stark contrast. [Throughout] the campaign, we hope to change people’s minds and, at the very least, pledge $5. That way they can see our progress and always [pledge more later],” Parnell said. Assuming the funding goal is reached, the plan is to take the game beyond its current 25 percent completion so that it has five bosses to take down, but there are several stretch goals that, if met, would see the team creating up to three more bosses and releasing them as free DLC. Other stretch goals include additional animations, more armor and weapons, and an orchestral score.

According to the campaign page, the plan is to launch Prey for the Gods on PC and Mac (via Steam) in 2017, but as evidenced by an FAQ on the game’s website, the studio has no problem holding the game back until they feel it is truly finished. Should funding hit $600,000, the game will come to the PlayStation 4 and Xbox One, albeit sometime after the initial PC release.

Prey for the Gods currently has 16 days left until the campaign concludes. You can find out more info and back it on Kickstarter.