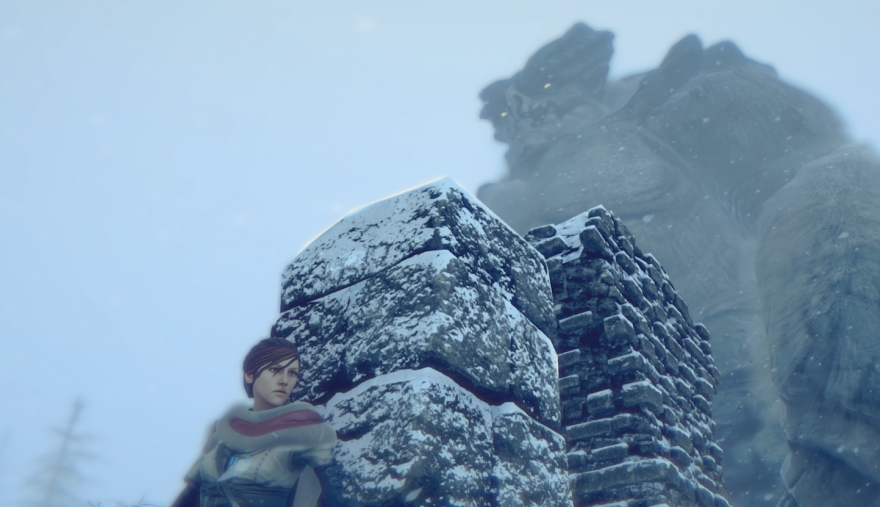 Few games have topped the truly epic scale of Shadow of the Colossus and its iconic boss battles, but an upcoming game called Prey for the Gods looks like a worthy comparison.

Created by No Matter, the recently revealed Prey for the Gods will have you battling huge deities on a frozen island in a journey to find the cause behind an eternal winter. Besides a few screenshots and a reveal trailer, that’s about all the information available for now, but what’s out there looks promising.

Prey for the Gods seems to understand what made Shadow of the Colossus such a heroic adventure to begin with. It wasn’t just that the bosses were big, but that you, the adventurer, were so, so small—not only in comparison to the mysterious beasts you fight, but to the world around you as well. Vast, open spaces, towering monuments, and looming cliffs all worked together to emphasize just how miniscule you were in the grand scheme of things, making your achievements feel larger than life.

According to the developers, Prey for the Gods even has the approval of Shadow of the Colossus level designer Takeshi Asano, who says the game seems “very good.”

Shadow of the Colossus isn’t the only game that inspires its creators Brian Parnell, Hung-Chien Liao, and Tim Wiese.

In an interview with 80.lv, the three also mention the importance of choice and consequence in Deus Ex, the emergent stories of DayZ and even FTL, and the combat of Bloodborne. How the game design decisions of these titles will influence Prey for the Gods, if at all, has yet to be seen, but Parnell does say that “mood, direction and story” are the major points of focus for their project.

Find out more about Prey for the Gods on its website.