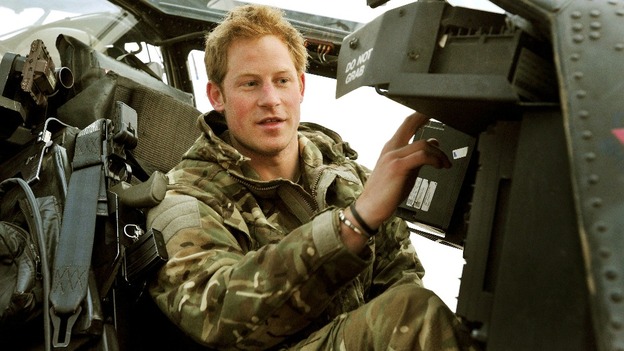 That handsome incorrigible rouge of the British royal lineage, Prince Harry is at it again, this time ruffling up the Taliban by comparing war games to videogames. Last night, The Guardian posted an interview with the young prince, who, on his way home from a four month tour of duty in Afghanistan, compared playing FIFA football to piloting an Apache helicopter.

That’s not so bad, right?

In the video, Captain Wales explained that moving into the gunner’s seat was “a joy to him.” He went on to say, “I’m one of those people that loves playing PlayStation and Xbox, so with my thumbs I like to think I’m probably quite useful. If you ask the guys I thrash them at FIFA the whole time.” These remarks naturally provoked the ire of the Taliban media conduit Zabiullah Mujahid, who fired back, “This is a serious war, a historic war, resistance for us, for our people, and now this prince comes and compares this war with his games, PlayStation or whatever he calls it,” adding that the prince obviously had mental problems.

This whole thing could be spun as a sign of how videogames turn players into readymade killing machines, but it strikes me as an equivocal endorsement of the interactive medium. For one, its great that a guy who could conceivably be King of England one day likes playing games so much that he is compelled to mention them in an interview. Two, his comments point out what we already knew: that playing these digital works can improve your capacity to do other activities, such as, apparently, gunning down insurgents from hovering death machines.

It’s an unfortunate reality, but war is a necessary evil. And it’s a little disconcerting that gaming, this activity we know and love, has aided Prince Harry in becoming an ace gunner. But I’m not going to draw a connection from basement dweller to warmonger here. Look, games have made a lot of people better at a lot of things: managing time, improving social skills, driving their car, and making Cold Stone Creamery ice cream.

The fact of the matter is that Harry is a better soldier because he plays games, but the same would hold true if he was a postman or a ranchero. While the issue of cultural desensitization towards war is a real one, let’s not conflate that with a soldier doing a job well done and getting some much-needed R&R.