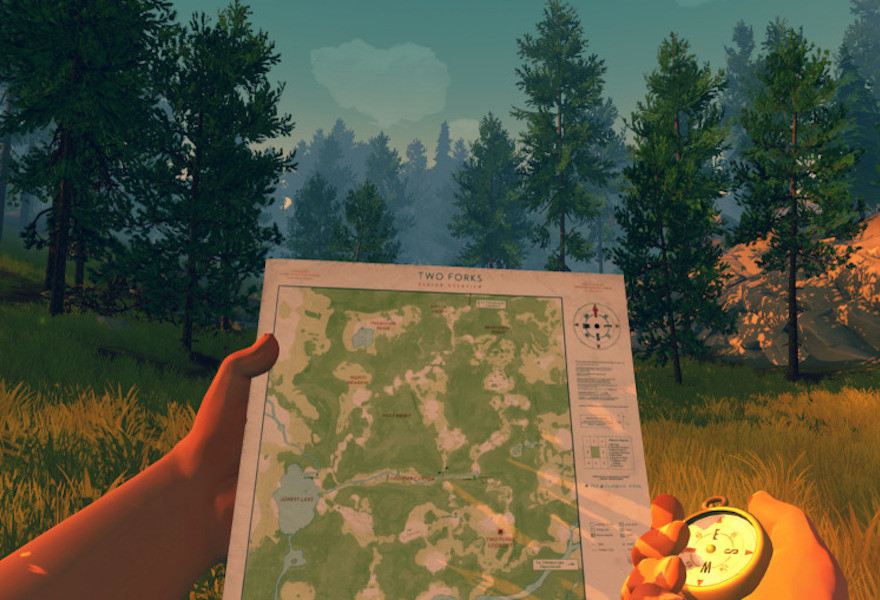 With its 1989 setting and focus on exploring the wilderness of the American West, Firewatch recalls a time before cell phones and GPS were common tools among those looking for adventure. Before Siri, the best option most travelers had for finding out how to get somewhere was still the simple paper map, with no guiding voice or blinking “you are here” indicator to make reading it any easier. To make up for this, car passengers would often double as navigators, reading through maps to find directions and arguing with drivers about which route was best—the main thing that’s changed is that we now shout at a stern-voiced machine.

Now, Firewatch creators Campo Santo are looking to bring that experience to the couch with their printable Firewatch map, offering a new way for duos to explore the game’s rendition of Wyoming’s Shoshone National Forest.

Free to download over on Camp Santo’s website, the printable Firewatch map depicts the entirety of the game’s playable area and comes in two varieties—one made to look worn and well-used, and another that is pristine and ready to be filled with the player’s own notes and instructions. “If you play games with someone next to you on the couch, print this out and hand it to them,” explains Campo Santo, “and your formerly disinterested couch-sharer is magically transformed into an officially engrossed Firewatch Navigator And Map Scribbler.” For an extra challenge, the team also suggests that those playing with a co-pilot turn off the game’s “you are here” map indicator, meaning that, in true ‘80s fashion, the player will have to rely on their partner to tell them where to go.

It’s a clever way to turn an otherwise single-player experience into a cooperative challenge, and it’s sure to set off a good deal of arguments about shortcuts and landmarks, or maybe even threats of turning this goddamn couch around. In contrast to games like Fable II (2008), which guides players from destination to destination with a magical glowing trail, Firewatch’s printable map is a reminder that, sometimes, not getting lost is a game in and of itself.

You can download the maps over on Campo Santo’s site.