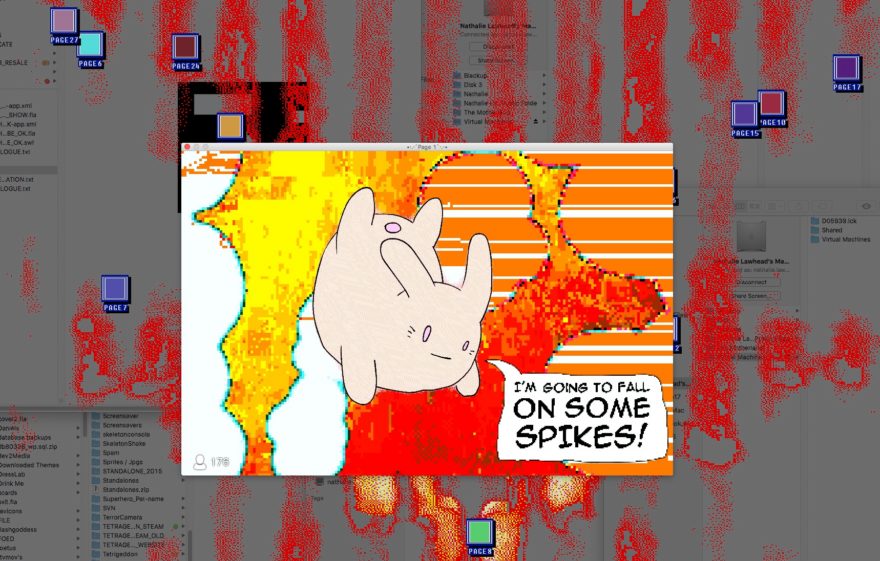 Game maker and web artist Nathalie Lawhead announced that she’s making an interactive zine earlier this week, under the working title “Everything is going to be OK.” It’s about being hopelessly optimistic while everything is breaking around you.

“It’s a cathartic dump of my past experiences mostly about feeling hopeless or ostracized for being a woman and doing the tech thing,” Lawhead told me. This is a topic she has written about before. “To me, the election results drove the point across that this situation will not improve.” What she fears most is the “sexist backlash” that having Donald Trump as president might induce.

“I mean, there are so many women that are looking at this right now and it just reminds them of what they had to go through,” Lawhead said. “This means a lot of things to a lot of different people, but I’m not looking forward to other sexist molesting bigots feeling empowered by this.”

Despite her fears and emotional exhaustion, Lawhead is diving into her creative projects as a way to not just cope with it all, but to keep fighting. “Art has always been a force of change, the tool of dissidents, and that subliminal subversion that slowly wakes people up,” she said. “If games are art, and we sincerely believe that, then now is our time to act like it.”

There’s more to “Everything is going to be OK” than its message of optimism against the odds—which can be seen in the zine’s blobby creature who suffers in various ways but always remains cheery. The pages of the zine are scattered across a computer desktop as if part of some corrupt entity that has taken over. A big part of the experience is working out how you interact and play with the zine’s 43 pages. It’s deliberately made obtuse and isn’t necessarily something you can win. That’s one of the reasons that Lawhead is avoiding calling this new project a videogame.

She told me that games are almost always about the player maintaining a level of control. Players learn rules and loops and are punished or rewarded according to their actions. But Lawhead doesn’t want to provide that safety for players any longer. “I want things that rebel and frustrate you and function on their own. I want you to feel betrayed,” she said. “You have to take the time to get to know it. Surrender your expectations, and let it make its own rules … You know, something where there is no more control …”

“I want you to feel betrayed”

This lack of control is also communicated through the visuals and audio throughout “Everything is going to be OK,” as images and video are compressed and corrupted. The idea is to create a sense of uneasiness, as if everything is on the edge of breaking … perhaps like the current situation in America. To achieve the degraded look, Lawhead uses tools like Glitch Cruiser and 3 Bit Dither (and many others). “Basically, you loop through the image data … or BitmapData … and then redraw it after you’ve messed it up. Then batch process or save. That’s one approach. It’s been the easiest for me,” she explained.

The final look has become somewhat of a signature of Lawhead’s work, the uncomfortable pixels and shredded images appearing in Monkey Fortunetell, FROGGY, and ARMAGAD. It’s something that Lawhead returns to due to her approach to digital art. “I find it funny that most image editing and art tools on a computer always try to mimic something in real life (realistic brush strokes, pencil, etc). Why fight with a computer to replicate reality?” Lawhead said. “Why not try to explore something totally unique to computers? Pixels, distortion, and tortured compression is a hallmark of digital art, so it’s interesting to see how you can make that work in a reasonable way.”

Lawhead’s move away from videogames and towards an interactive zine with this latest project is indicative of her current feelings of the tech space. She said that “Everything is going to be OK” might be the last game-like thing she makes due to financial reasons and depression, but remains hopeful that it isn’t. She recalled the times when she has been told by men who work in tech that she isn’t smart enough, or doesn’t take on the “hard problems,” which lead to her questioning her own self-worth, even if she is able to overcome it.

“This whole constant barrage is a joke. I feel like I have to keep seeing through this, and maintain that realistic point of view. Yes, it is hard, but I’m not making games, or working in tech, for approval. I don’t need permission to do this. I do this because I love it,” Lawhead said. “The fact that I have to put up with crap means I’m doing it right. If I didn’t put up with crap then that means I’m probably an entitled asshole too and I need to rethink my world view.”

You can find out more about Everything is going to be OK on its announcement page. Check out Nathalie Lawhead’s other projects on her website.