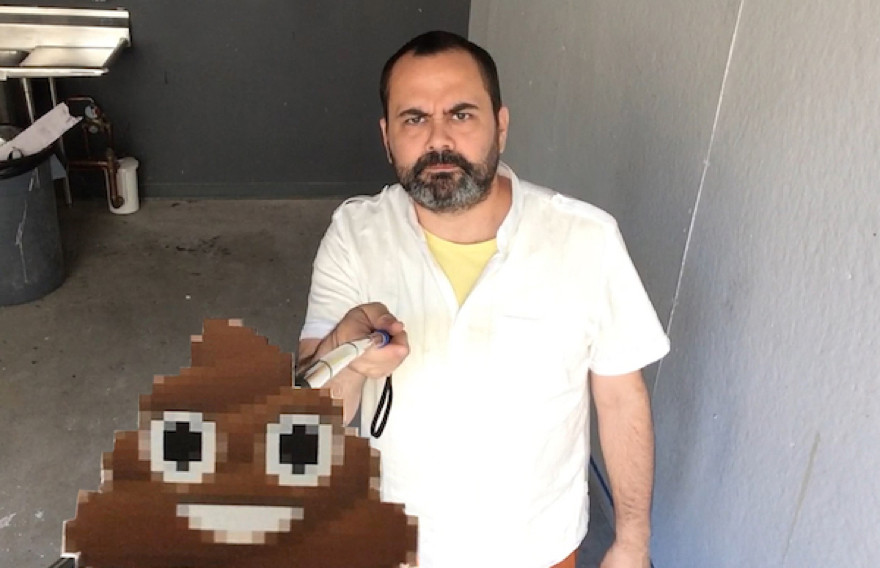 Selfie sticks are extensions of a person’s power more than their arms. They are tools of conquest, a way for their owners to claim dominance over a larger swath of space in the name of better self-portraiture. If you frequently give in to the siren song of thinkpieces, you’ve seen this selfie shtick before. What you have not seen is Pablo Garcia’s antiquity-inspired solution to the selfie stick scourge.

An Assistant Professor in the Department of Contemporary Practices at the Art Institute of Chicago, Garcia found inspiration in the ancient Roman practice of handing out memento mori—reminders of death—to victorious generals. This practice, he explains in the accompanying video for his memento mori selfie stick, was meant to “reduce vainglory and self-importance.” Put otherwise, handing out skulls was a great way of taking generals down a peg.

Garcia has updated this technique for the 21st century, affixing the skull, poop, and thumbs-up emojis (are there any others?) to selfie-sticks. Since the selfie stick is an accoutrement designed with the sole purpose of highlighting its owner’s face, this required some doing. Garcia employed an anamorphic projection, printing paper graphics that would look stretched when viewed head-on but perfectly scaled from the iPhone’s haughty perch atop of the selfie stick.

“Remember (that you have) to die.”

Translated from Latin, memento mori means “remember (that you have) to die,” which is a slightly gloomier message than the one sent by Garcia’s apparatus. It does, however, embody the social function of this message. Much as skulls put generals in their place, emojis remind selfie stick owners that they are not that serious. Let it be noted that there is nothing wrong with using a selfie stick. It is a useful tool. But if you’re going to behave like something of a doofus, you might as well embrace the fact that you look like something of a doofus. Pablo Garcia has given the world a means of achieving that end.