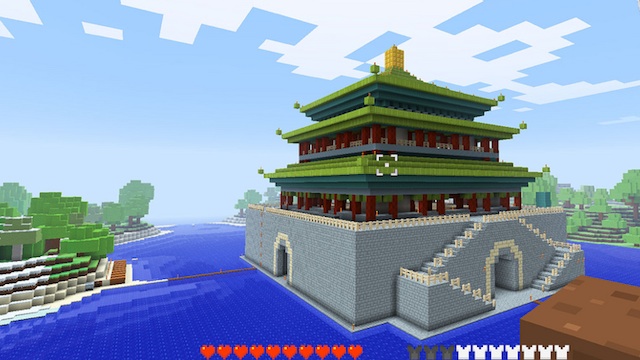 Dr. Jeff Brand is a Professor of Interactive Media at Bond University in Gold Coast, Australia, and his Minecraft character looks more or less like he does. It’s balding, has two black square eyes, and wears a wide toothy, gaping smile. This is relevant because Brand had his students replicate in Minecraft the Arch Building, the oblong brick structure where their class is held.

Then, In late January, after tropical cyclone Oswald dumped a deluge of muddy water on the Queensland region, the school was closed. Desperate times called for desperate measures. Determined not to fall behind in his lesson plan, Brand scheduled classes to be held on the Minecraft servers, with his students logging in from their computers at home.

It didn’t start so great.

According to an article on Kotaku Australia:

There were some issues — students had to alt-tab into another program to see the slides, for example. But the main problem, initially, was communication. Students were used to face-to-face discussion, raised hands, speaking with actual voices. At first people seemed a little reluctant to answer questions, to talk.

“Within about 10 minutes I thought to myself, it’s kinda going slow. I want more involvement,” Brand explains. “It was then I realized, I could just give out XP! From that point on I couldn’t shut them up — the text was flying.”

While gaining experience points in the classroom may seem to violate every association we have with places of learning, the fact is school systems already subscribe to the notion of being gamified, although they aren’t very exciting games. The contest for valedictorian is a war of attrition held among a select few brainiacs. One low mark and you’re out of the race. Then, there were those contests in elementary school where the class which had the highest cumulative G.P.A. got to go to the mall and eat pizza and ice skate. I always hated that class.

“It was then I realized, I could just give out XP! From that point on I couldn’t shut them up.”

Another teacher, Paul Anderson of Bozeman, Montana (who teaches Anatomy, Physicology, and AP Biology) has completely envisioned his classroom as a videogame. He emphasizes the importance of leveling up, which turns upside-down the traditional grading system, in which students start out with the best score, an A, and every missed question or slip of the scalpel knocks their grade point down. “No game would ever be designed this way,” he says in his TED talk.

Still, the end result of acquiring knowledge is ultimately up to each student, but experience points are compelling systems that have been proven effective in games the world around. While there’s a valid argument that the systems like those found in Minecraft are manipulative because they hook players with Pavlovian conditioning, and they focus on a meta-game rather than content, Brand doesn’t see it that way. “This was just another opportunity for us to connect,” he says.