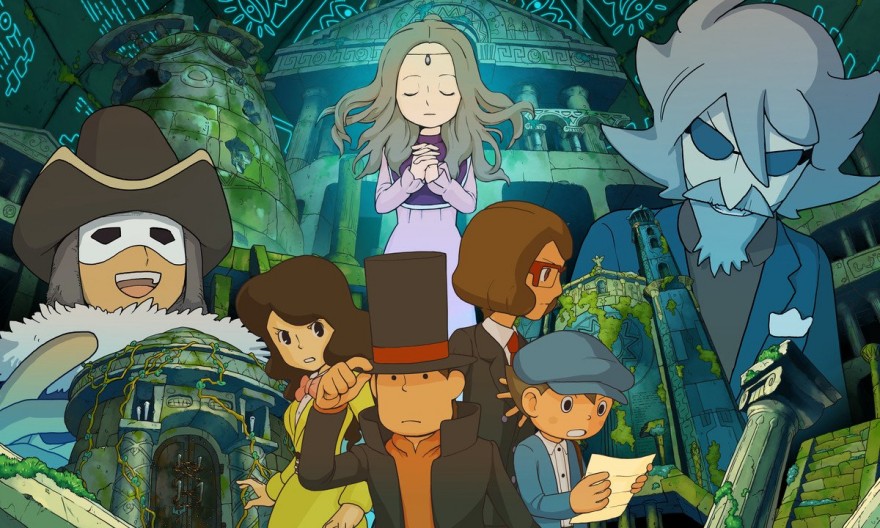 When I first made the acquaintance of Professor Hershel Layton, six years ago, I at once found myself in admiration of his warm, gentlemanly demeanor and his fervent enthusiasm for a good brain teaser. As I helped to guide him and his apprentice Luke through the mystery of The Curious Village, rearranging matchsticks, sliding blocks, and seeing through deceptive wordplay, I was surprised at just how enamored I was. I came to realize that I was in the company of friends who I would gladly accompany on half a dozen such adventures.

Well, here we are at the end of the road. Professor Layton and the Azran Legacy is the sixth (and purportedly final) adventure, and like its predecessors it is every bit as handsome and refined as the Professor himself. The game sees Layton, apprentice Luke, and assistant Emmy Altava on a whirlwind tour of exotic locales in search of ancient artifacts to revive the legacy of a long-dead civilization. In terms of scope, it is the largest and grandest Layton outing yet. It creates an intriguing and pleasant contrast with series debut The Curious Village, which actually follows Azran Legacy in the series’ chronology, bringing the Professor’s travels full circle.

Truth be told, even with the inclusion of a non-linear, globe-trotting second act, there are very few deviations from the usual Layton formula in Azran Legacy: the Professor leads his merry band through a series of beautiful, detailed environments (the three-dimensional features of the 3DS lending a sense of tangibility), interacting with a cast of charming, often goofy ancillary characters, each and every one of whom seem obligated to test the Professor with their own personal stacking puzzle, algebra problem, or riddle. In the world of Professor Layton, puzzles are gifts to be traded, bargains to be struck, and threats to be overcome. They are currency one moment and weapons the next.

It’s a premise that would be ludicrous if developer Level 5 did not invest so much love and care in selling it, but that’s exactly what they’ve done from the very first entry in the series: an earnestness and sincerity inhabits every nook and cranny of each game, so that when we accompany the Professor to the curious hamlet of St. Mystere, the desert boom-town of Monte d’Or, or the various and sundry locales that make up Azran Legacy, it is easy to believe in the world that Level 5 has created.

Every screen houses beautiful secrets for you to discover, making each new dot on the map its own reward.

Azran Legacy, like the other Layton games that have preceded it, feels like a vacation with friends. You are invited to spend fifteen or twenty hours in several exotic locales, from a tropical tourist paradise to a mountain village replete with windmills, which entice you to linger and explore. From a limestone cavern populated with innumerable stalactites to a hotel lobby dominated by an aquarium which houses an adult whale shark, every screen houses beautiful secrets for you to discover, making each new dot on the map its own reward.

Each of these destinations is inhabited by citizens who almost universally welcome you the moment they see you. In any other adventure title, these non-player characters might be purely functional, but the Layton games want you to invest yourself in these people. The proprietor of a run-down diner reveals that the place looks so shabby because she has been putting all of her profits toward the rescue efforts after a series of mysterious plane crashes. As you leave each location, new articles in a publication called the “World Times” invite you to revisit previous destinations and spend more time with their inhabitants: Was there really a yeti sighted in the frozen town of Kodh? Why is the newest chip shop in Kensington so popular? The player never needs to track down the answers to these mysteries, and if they do, they’ll find the answers are often mundane. But one is compelled to investigate, because these vignettes offer delightful evidence that the puzzle-givers of the world have their own desires, frustrations, lives. The more time you spend with the cast of Azran Legacy, even the bit players, the more you come to love them.

Many of the game’s pleasures are entirely optional. The three unlockable mini-games, which involve such heart-pumping pursuits as fashion, gardening, and playing with a squirrel, are continually expanded as the narrative unfolds, but the game never obliges you to accomplish any of them. It simply lays them out on the table in front of you and invites you to engage at your own speed: as soon as new puzzles unlock, all at once at the end of the game, or not at all, according to your preference. The whole game is a rich banquet of artistic, musical, and intellectual delights—but whether you gorge yourself or merely sample is up to you.

Even the puzzles that make up the game’s central mechanic are only as difficult as you want them to be. The game offers you “hint coins,” acquired by spending time investigating in detail the lovely environments, which can be spent to get you closer and closer to a puzzle’s solution. You can pay your way to the answer, in fact, in just about every case. Why would a puzzle game allow you to flip to the back of the book for answers? Because it’s the gentlemanly thing to do. Azran Legacy knows that it is there for your amusement, and it bets that, like the Professor, you’re drawn to the puzzles because you want to challenge yourself. It never obliges you to. For all that the puzzles are the core of Azran Legacy, the game knows they’re not the heart—the heart lies in the characters, in the world, in the story.

Azran Legacy left me misty-eyed, a knot of feeling sitting heavy in my stomach.

And the story is compelling. The initial mystery, of a girl kept in suspended animation for countless millennia, is a tantalizing invitation to embark upon the world tour that Azran Legacy offers, and it gives the game plenty of time to invest the player in its primary cast. By the time the vacation comes to a close and the revelations begin to fly in the game’s final act (and fly they do—secret identities and hidden agendas abound), one has enough stock in the Professor’s companions that the final twists pack a considerable punch. The Professor Layton games have never shied from creating real, emotional stakes for their characters, and some of the finales (Azran Legacy especially) have left me misty-eyed, a knot of feeling sitting heavy in my stomach. It is a credit to Level 5 that after half a dozen Layton titles, I would crack a schoolboy grin if they reneged on their declaration of finality and decided to bring back Hershel Layton for one more adventure.

And yet … a true gentleman knows not to overstay his welcome. Professor, if this is where we must part ways, I tip my hat to you in admiration. Six strong games is an exceptional accomplishment. I don’t know how I’ll book a videogame vacation for next year, but I’m willing to bet that if I can manage something, it won’t have the same charm as the travels I’ve taken with the English gentleman in the distinctive top hat.