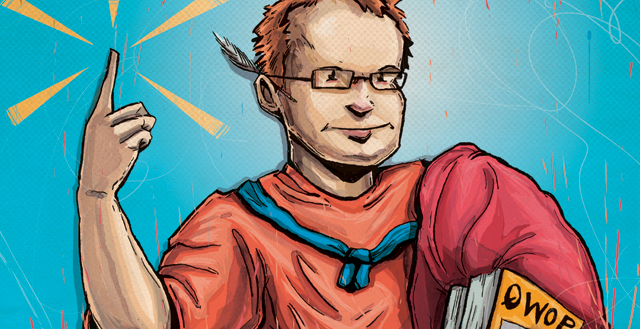 How many “rock star” game makers can play an instrument? Or claim that they’ve packed 5,000-capacity venues and had underwear thrown at them? Bennett Foddy can. In addition to creating the finger-twisting experimental games QWOP and GIRP, he was a founding member of the band Cut Copy. And somewhere in between his hobbies, he managed to earn a PhD and become a philosopher at Oxford. We talked to him because, hell, as a Renaissance man we figured he’d have a preternatural ability to give interesting interviews.

Where’d you grow up, and what was your childhood like?

I grew up in Australia. I knew that I never wanted to be an academic because my parents were academics. I knew of all the things in the world, what I didn’t want to do was to be an academic. And I went to university in Australia and fell into doing a PhD, finished that, and got a job at Princeton. [Laughs]

There’s a certain gravity to the family business. That said, I’ve done a variety of other things by means of procrastination. I’d been trying to make games for years without any success, never really finishing anything. And I was in a band for a little while. I loved performing, but I didn’t want it to be the only thing I was doing for my whole life’s career, so I dropped out of that and I made TV commercials with a friend of mine.

That’s about when you joined Cut Copy, right? How’d you get looped into that band?

My childhood friend] is the singer, and at that stage he wrote 100 percent of the music. Playing bass is … as a student, I played cello for a number of years. Not very well; badly, I would say. It was not one of those things I had any aptitude for.

But it was fun?

No, not really. Sometimes when you do something for many years, you have a grim determination to continue it even if you don’t enjoy it at all. So going from that to playing bass guitar is not very taxing, particularly in a band where no one can really play their instruments.

Our first show was in front of 5,000 people at a festival, which was sort of terrifying. I guess I’d always thought of stage fright as a negative thing. And performers who would say, “I just do it for the buzz”—I thought that was just meaningless to me; that’s not what it feels like to perform. But when you’ve rehearsed a piece a million times and you have an appreciative crowd, it is a buzz. It is a purely sort of positive feeling, at least once you’re out on the stage. It was really an enjoyable thing to do.

Was that your main focus at that time?

No; I was supposed to be working on my dissertation. [Laughs]

What was your best experience with Cut Copy?

Good shows with people who genuinely came to see you and are throwing their underpants at the stage. The world of music is very bizarre, though. You go to a nightclub and you get to go in before all the people waiting in line, or some girl walks up and asks you to sign her boobs, or something like that. It’s all just very strange.

There’s something lyrical about the character motion in your games like Little Master Cricket, QWOP, and GIRP, and dances like the Bernie and the Dougie recall the movement in your games. I’ve noticed that these games have a clear rhythm that leads to optimal play. Were these games influenced by dance or by music?

No—it’s interesting that you’ve said this. I’ve never really thought about it being a rhythmic thing at all, but it obviously is an important component of playing each of these games well. I’m trying to understand why I made three games that have that. If it’s emerging as a theme, I’m not sure why. Maybe the thing is that human movements are naturally rhythmic. Ambulation—which is what QWOP is about—is definitely rhythmic, otherwise you fall over when you walk. I think maybe it’s standing out in contrast to other games, which don’t tend to have such a rhythmic component.

Why do your games typically lack full soundtracks?

I think at this point, 15-second loops is about the most I can manage. For GIRP, I managed to reduce it down to three piano chords. And part of the thing is that it takes a certain amount of maturity and attention span to write a full-length song that I don’t think I have.

Do you ever think about music games? Would you ever make one?

I tried to make like an ice-skating game where you would like sort of make music as you went.

It sounds like you’re taking a more expressive angle where play creates the music, as opposed to the music directing the play.

People ask, “Why are you playing Guitar Hero? You should learn the guitar.” And the reason is that rewards are actually quite a long time coming when you play an instrument. You actually create sort of horrible noise for the first year or two, and you really have to persevere. You have to be motivated. You need some sort of external motivation to do it. I actually worry about this. I don’t know if you have this sort of experience, but I find that one of the reasons I’ve been so drawn to computer programming as a hobby is that it’s inherently … compelling? You do a little bit of work, and then you press a button and it tells you whether you were right or wrong.

So my day job is as a kind of philosopher, and I do applied philosophy of medicine and, uh, sort of scientific stuff. We look at developments in neuroscience and medicine and various other fields, and talk about the moral and philosophical implications of those things. There’s an increasing amount of crossover, because I spent three years at Princeton studying drug addiction. One of the things I’m trying to do at work is to understand whether videogame addiction exists, and what it means from a kind of public health perspective.

Do you see similarities between your work and your games and your music?

Not when I was making music. I guess the similarity between my work and my games comes in at structuring reward and punishment in games. Um, we usually only talk about reward structures in philosophy and cognitive science, rather than punishment structures. I think part of the reason for that is, we can’t really punish people—we’d never get through the ethics committee if we wanted to run an experiment and we wanted to punish people. But if you’re putting together a game—the tricky thing about games as an art form, compared to other forms of art forms, is you’re giving someone a task and presenting it as a predicament. And that means they’re going to have to expend a certain amount of effort to do it at all. So you need to motivate them to expend that effort. You need to figure out how you’re going to get people to continue to play.

This probably dovetails with your addiction research.

Yeah, my basic theory on addiction is that if you repeat a rewarded behavior enough, you’ll begin to crave repetition of it. You can also get reward in cases where you consciously aren’t enjoying yourself, and don’t think it’s valuable. It’s fine to be addicted, as long as the rewarding activity remains valuable to you in the right amount. So if someone is completely enslaved by one of my games, but they’re having a good time the entire time that they’re playing, that’s fine; but if they’re still playing it slavishly and saying, “I wish I could stop this is ruining my life,” it seems at that stage something has come apart there. I think the only thing you can really do as a game designer, to prevent that from happening, is to create games that are genuinely valuable, instead of having this fake, misleading reward.

How do you balance philosophy with making games?

I have this colleague of mine who is an avid rock climber, and I’m trying to get him to play GIRP. He says that what I’m saying is like, “I’ve come up with this new formula of crack that’s ultra-addictive; why don’t you try this new crack I’ve cooked up?”

Could you use your research to make the most addicting game in the world?

Yes. I’ve actually thought about making a game that explores this a little bit. It would start out with really rudimentary dynamics and you would have very high latency, very small visual rewards, no scoring system, no sort of risk/reward balancing or anything like that. And then every time you went up a level, it would add one of these things that you use to make people more and more addicted to a game. And at the higher levels it would have things like achievements and loot drops, and so on and so forth. And it would then come up with a message, like, “NOW YOU’RE ADDICTED.” Because I think it would be interesting for people, as players, to piece apart what’s being done there a lot of the time.

I worked at home all day, so you’re lucky I was even wearing pants.