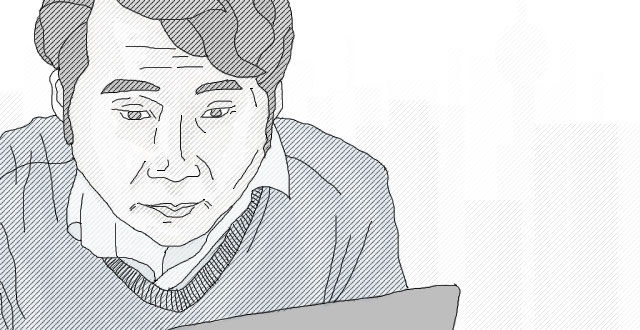 I’m on my way to visit a Chinese independent iOS developer, Coconut Island. The building housing its office space is 10 minutes by taxi from my neighborhood in central Shanghai. I decided to ride my bicycle.

I arrive at a six-building apartment block typical of Shanghai’s older residential high-rises. Just past the guard at the gate are piles of disassembled scaffolding materials and dedicated zones for bike parking. Flickering florescent lights dimly illuminate the walk to the elevator. The air is thick with concrete dust from nearby construction.

The block is distinctly urban Chinese, reminiscent of past decades while unmistakably poised for expansion and refinement. The view from the 18th floor reveals a landscape of similar scenes, the norm in a metropolis of 20 million—a city characterized by both the urban sprawl of Los Angeles and the structural density of Manhattan. Shanghai is a massive, crowded city.

Is naming an indie studio Coconut Island amidst the concrete an act of utopian escapism or defiance?

The austerity of the entrance is contrasted sharply by the cheerfully decorated interior of the studio, and the brightly painted orange walls belie the foggy weather outside. Artists and programmers sit in close quarters, focused on code or art. A bookshelf of reference materials houses a modest collection of vinyl and vintage aluminum toys—an eight-inch “Frank” from the film Donnie Darko stands apart. Muffled maniacal laughter leaks in from an adjacent room, a recording session in progress. Post-it notes and schedule updates line the walls. The small team of about 10 looks up, smiles, and gets back to work; they are mid-project.

Wesley Bao and his fellow co-founders Ye Feng and Wen Chen are of a recent breed of Chinese game developers—both weaned on foreign games and groomed at foreign game studios. The local games industry is half the age of the industry in the West, and many like Wesley got their start working for international publishers, such as Konami and Ubisoft, setting up their studios in China. These companies would mostly run dedicated outsourcing operations or attempt to capitalize on the immense, still-growing local market for online games.

I was a programmer at Konami. I owe them; I learned so much there. Before then, I only knew I wanted to make games; I had been thinking about it for 10 years, but I had no concept of the game industry as a whole, production practices, or the business side of things. When I got to Konami, I felt my dream was coming true.

After about a year, I felt something like cheap labor. They’re here because costs are low. They didn’t want to teach us too much, and they also didn’t think we could create anything worthwhile ourselves. We felt that they wouldn’t give us much agency over our projects … which were eventually cancelled. I decided to leave.

Shanghai is regarded as the seat of something equivalent to “the American Dream” in China, and not just for locals: it is a golden opportunity for people moving from abroad, and the economy is booming, despite the financial crises of the rest of the world. China’s GDP overtook Japan’s to become the second-largest economy in the world last year, and Shanghai’s GDP overtook that of Hong Kong even earlier. Though the standard of living for the average migrant worker or countryside laborer remains starkly typical of an emerging, yet Third World nation, entrepreneurs, professionals, and culture mavens flock to Shanghai in droves as cost remains low for an increasingly accessible, international, cosmopolitan lifestyle.

However, in videogames and other creative industries, just as in manufacturing, China remains line-production-oriented. Though economists predict that soon this will no longer be the case, the country’s reputation as “the world’s factory” is not unearned, and it remains the rule for much of the local game development industry. Local developers working for the larger international publishers historically have been focused on outsourcing or smaller projects with limited creative control. In those cases where major creative work is done locally, it is often foreign leads that run the project.

Though they are popular here, games developed for the Chinese market have yet to make waves on the international scene. Cultural influence seems to still be moving in one direction—inward.

Wesley looked for work at another international developer, but instead joined a startup boardgame publisher, where he absorbed the beginnings of an entrepreneurial mindset. In the meantime, the iPhone was launched, the App Store gold rush began, and he made up his mind. Two weeks after quitting, he released iDragPaper under the name Coconut Island.

iDragPaper is no masterpiece, but since then Wesley’s growing team has released around a half-dozen games, all consistently highly rated on the App Store, gaining the studio some attention and revenue. One game, Crossout, was an IGF China finalist at the Game Developers Conference China in 2010—and notably so, as Coconut Island was the only developer from mainland China to receive a nomination. Mind the irony: the other finalists were from South Korea, Australia, Singapore, and Hong Kong.

This isn’t to say that Coconut Island is the only independent developer making games in China, but the homegrown studio is somewhat unique. Its marketing is essentially 100-percent focused on the English-speaking world, using Twitter and Facebook, both of which are banned in China and are only accessible with some technical gymnastics. Coconut Island doesn’t even have a Chinese-language version of its website—it’s all in English. This is downright bizarre for a small Chinese studio, and puts Coconut Island in the minority of local developers, though it isn’t alone in targeting international audiences.

Unfortunately I think there’s really no space for small, independent, creatively focused studios in the Chinese market right now. More and more developers are starting to publish internationally as their primary business, mostly on iOS and Android—it’s sad to say, but I think it’s the only way to have any creative freedom as an independent developer here at this time.

The Chinese games business is for the most part extremely insular, as developers make MMOs, casual games, and social games for a strictly Chinese audience. Many of the most popular online games in China aren’t graphically sophisticated or culturally broad enough to compete internationally, and though the Facebook social-game model takes many of its cues from ground first traversed by Chinese and Korean game developers, this has not yet translated into many direct exports.

Regardless, Coconut Island’s primarily overseas-directed marketing is simply a logical response to both the nature of App Store distribution and its limited resources. Wesley didn’t intend to focus internationally, but in light of the realities of publishing locally, in addition to the fact that 50 percent of downloads were coming from the U.S. and less than 10 percent from China, it seemed practical.

The Chinese market isn’t open to indie developers. The rule here is, “who controls distribution is king.” This normally means making social, online, or web games suitable for distribution by Tencent or Shanda, who take a huge percentage of the profits. There isn’t much room for making standalone games in China, even on mobile.

The studio looked for collaborators with other Chinese indies, but Wesley was disappointed by what he saw as an emphasis on short-term returns or “digging for gold alone” and hoping for a breakaway success with as few parties involved as possible. This didn’t help to assuage him of his disillusionment with the Chinese games business in general.

There are so many hidden gates to publishing in this country. You need to have a person inside, someone who has some kind of relationship with the government, or else it’s very, very hard. I hate the whole idea. I don’t want anything to do with these people, people that use connections to succeed.

It’s better now than before, but that’s still the way things work. We want to go a different way … we want to make games that we want to play, to make things that are fun to us, and it seems that the international market is the best way for us to do that, at least for now.

When asked to choose between moderate international success at the cost of being entirely unknown in his home country; and great local success and being a complete unknown abroad, Wesley doesn’t hesitate: international success. Why? He says Coconut Island can move from international success to Chinese success more easily than the other way around. Despite the enormous growth enjoyed by games built specifically for the local market, which grew from $3.9 to $5 billion in 2010, foreign games remain popular with core gamers. Though they are popular here, games developed for the Chinese market have yet to make waves on the international scene. Cultural influence seems to still be moving in one direction—inward.

What about a sense of ethnic or national obligation—does Wesley feel that he, as a Chinese game developer, owes something to Chinese gamers? Is there a feeling that he should be giving back to his countrymen first and foremost rather than looking for success abroad? He looks at me thoughtfully, with perhaps the slightest tinge of wistfulness.

I do feel that—but I feel a greater responsibility and ambition to change things about the Chinese game industry first, not just cater to the market as it stands.

As game developers, the rise of international self-publishing and digital distribution as a viable business model has given them the means to make the games that they want to make. As a part of the Chinese game industry, it is where they see the potential for change. Wesley hopes Coconut Island can garner enough success to then share its experience and help other local indies make quality games to self-publish. “There’s so much desire and talent in China that just needs a bit of a hand to get moving. This is my first step.”