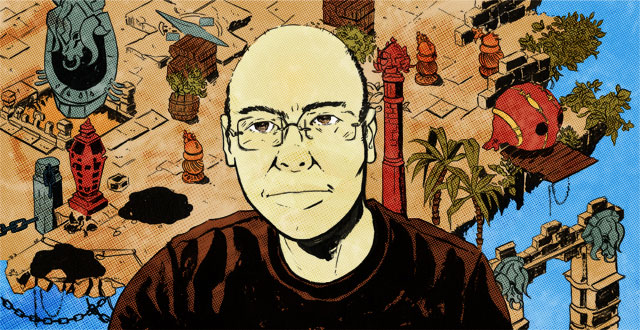 After spending more than 10 years writing about videogames at GameSpot, where he rose to the rank of editor-in-chief, Greg Kasavin made the transition to game development in 2007 when he joined EA LA as a producer. Last year he signed on as creative director of Supergiant Games, whose highly anticipated title Bastion is slated to drop on XBLA this summer. We asked Greg about his love of well-crafted stories and why he chose a career in games over literature.

What were your favorite stories growing up?

As a kid growing up in the mid-to-late-’80s, I loved a lot of the vivid fantasy and science fiction of the era. I was as big a fan of Star Wars as anyone, but thanks to having an older brother by three-and-a-half years, I got early access to such classics as Conan: The Barbarian, Blade Runner, and RoboCop. I also loved imaginative movies like The Dark Crystal and got into anime at a young age through Robotech. I loved that Robotech dealt with serious themes and characters under the guise of a cartoon.

I was basically a big fat nerd. I read a good number of books, but the games I played as a kid have stuck with me much more. Ultima V, Wing Commander I and II, Phantasy Star II, Star Control II, and Final Fantasy IV and VI are all standouts. They were well written, surprising, and emotionally as powerful as any of the stuff I’d read or watched at the time.

What about those particular game narratives resonated with you?

The thing that all of them had in common was that they were these crafted narratives where, at key moments at least, I became an active participant in what happened. In the Wing Commander games, all of your wingmates are these three-dimensional characters with distinct personalities and motivations, but if you’re negligent when you’re out there on a combat mission, you can get them killed. It felt pretty awful and amazing at the same time. Or in the classic 16-bit Final Fantasy games, you’re driving these multifaceted characters on these grand journeys that sometimes put the characters at odds with each other. These games felt like they were taking advantage of the unique properties of the medium to tell their stories.

The original Fallout was another incredible example of this for me, since at the end of that game, the epilogue reveals the consequences of your actions in the world. I think many of us go through life wondering what if any meaning any of it has, wondering what impact we have on the lives of others and the world around us. Games like this, I think, shed some insight onto those questions. Or if not, then at the least they feel personal and resonant.

“There’s a faction of game developers and players who believe that crafted stories have no place in games, that games should be fully open-ended and allow players to create their own stories. I don’t believe this at all.”

While at UC Berkeley, you considered pursuing a career as an English professor. What prompted that idea?

I did consider becoming an English professor while in college, as I was going through a probably typical experience of trying to figure out what I was going to do with my life. I even thought about going into the military, even before all those cool commercials targeted at videogame players. It was sort of a dark time for me, when I felt I was no closer to getting into game development and thinking maybe I should go find something else that came more naturally to me. I was already working at GameSpot, but dreading my future for whatever reason.

My motivations for wanting to become an English professor came from a very negative place: I wanted to have the authority to tell students that they were wrong.

I was very frustrated with most of my professors for being completely unwilling to push back on any of their students. I’d be in these large classes where, inevitably, one or two people would always raise their hands in discussion and offer the class some ridiculous long-winded interpretation of the text, often using it as a platform to reveal too much information about their personal lives. I had a lot of teachers toe the line about how all views are valid, which I never believed, because I always intuitively understood the idea of authorial intent—like, what if that’s not what the author meant at all? Shouldn’t that enter the discussion? It rarely did.

I’d also started reading more in high school and college. I was lucky to know a few people with good taste, so apart from the stuff I was being fed in English classes, I got good recommendations on fiction. The author who left the strongest impression on me was William Gaddis, whose first two novels The Recognitions and J R are two of the best I’ve ever read.

It’s interesting you mention Gaddis, since his work is heavily invested in playing with narrative structure and style. How do you think that ethic has informed your own work as a writer and game developer?

William Gaddis has the best ear for the human voice of any author I’ve read. His novels are very challenging at first but very rewarding, and offer piercing insight into what drives people, as well as a broad range of emotional experience. He does also play with the narrative voice, moving in an artful way from extreme minimalism to these rather lyrical scene-setting moments. It’s an inspiration to me if only because it’s really, really good. But yeah, I’ve tried using some of his specific narrative and rhetorical tricks myself. The opening lines of the debut trailer for Bastion are directly inspired by the way Gaddis novels tend to open up, with some sort of profound theme-encompassing question that takes on more and more meaning the more you invest yourself into the work. Gaddis also has this capacity to move from heavy emotional content to something like slapstick comedy, and I’m also very interested in that kind of tonal range. Life typically is not monotonous, and most emotions are not mutually exclusive. I like writing that contains a breadth of feelings, and hope players will find that to be the case in Bastion‘s story.

Do you view other games through the same lens, in terms of trying to parse authorial intent or technique?

I rarely get a sense of authorial intent from the games I play. I don’t think it’s something that games need to have, and I don’t go looking for it. But then sometimes I’m reminded that it can be there, and I really like it when games give me that feeling. Games like Killer 7, Braid, BioShock, Portal, and Red Dead Redemption felt authored to me, like they were exploring themes with a specific and unique voice, and that the gameplay was driving toward something that was more than just fun—and in Killer 7‘s case, I think that game was consciously trying not to be fun. I really like when games can have enough substance to them to provoke in-depth discussion about their content. There’s this gigantic, fascinating Killer 7 story FAQ on GameFAQs that attempts to parse the different layers of meaning in that game. I want to make games that engage people on that kind of level, get them very invested in the fiction and characters and ideas.

There’s a faction of game developers and players who believe that crafted stories have no place in games, that games should be fully open-ended and allow players to create their own stories. I don’t believe this at all. My favorite games are the ones that combine well-crafted narrative with systems that allow the player to impact that narrative in some way.

No regret about not going the academic route, then?

Right now, as Bastion is wrapping up development and, I think, shaped up to be the game I hoped it would be, I have no regrets. But this is a rare moment for me.

Games have taught me a lot. In role-playing games usually the way to make a good character is to specialize. Don’t try to be good at everything; just find something you think works and focus on mastering it. For me, games were that thing. They were something I loved from a young age, and I never believed my parents—who were sure I’d grow out of them one day, like my older brother did.

In a role-playing game you often can’t help feeling some “class envy” at some point in your career; like, how come the mage gets all those cool spells when you’re stick with a cudgel or something? Likewise I often feel like I’m “stuck with” myself. But no use crying over it—might as well try and make the most of it and see how it turns out.

Eventually the thought of becoming a professor passed. The real reason I wanted to be an English professor was because I love to write, and wanted to feel accepted, like I had a legitimate job. Then I remembered I didn’t care much about what other people thought. Games were always legitimate to me, and that was enough.